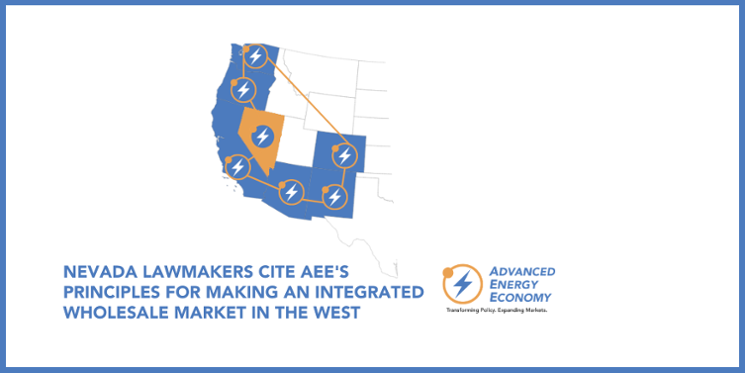 Creation of a wholesale energy market in the West got a stamp of approval from Nevada last week when a legislative committee sent a letter to state officials urging them to support western regionalization – and citing AEE’s principles for doing so. “The West may meet its near-term clean energy policy targets” with current arrangements, committee chair Daniele Monroe-Moreno wrote. “However, to achieve long-term clean energy targets, western states and utilities must move towards even more flexible options and coordinated operations.”

The letter from the Nevada Interim Committee on Energy to Governor Sisolak, Office of Energy Director David Bobzien, Public Utilities Commission of Nevada Chairwoman Hayley Williamson, and President and CEO of NV Energy Doug Cannon came as a result of a year-long study of critical issues facing the state’s electricity sector.

Key decision makers across the Silver State are coming to recognize the need for and potential of regional markets to help Nevada achieve net-zero greenhouse gas emissions by 2050. State Climate Policy Coordinator Dr. Kristen Averyt highlights in the recently released Nevada Climate Strategy that states must work together to maintain system reliability and keep costs down on their pathway towards a clean energy future. She notes that Nevada’s location makes it a transmission hub to distribute energy across the region. This gives the state leverage in the design of any regional framework.

The lack of regional coordination is rising to the top of Nevada’s priority list for compelling reasons. To date, Western states have largely managed their grids independently from one another. Divided between 38 separate balancing authorities, the region stands out from most other geographies within the United States. As the grid becomes more dynamic and complex, the operational and cost inefficiencies inherent in this haphazard system have only become more glaring.

We have already seen how the Western Energy Imbalance Market (EIM) has created $861 million in benefits in just five years by facilitating real-time energy sales between 11 participants, including NV Energy. The California Independent System Operator, which administers the EIM, estimated NV Energy’s savings from approximately three years of participation to be over $82 million. It is expected that a full Regional Transmission Organization (RTO) will deliver cost savings well above those already realized by the EIM. But significant cost savings are not the only reason why an RTO is a must-have for the West.

Just this past summer, a number of states including Nevada faced electricity supply issues due to extreme heat, wildfires, and resource outages. Because NV Energy asked its customers to voluntarily reduce their energy usage, it was able to avoid brown and blackouts. However, this is neither a desirable nor dependable solution. Maintaining grid reliability during increasingly frequent and severe conditions will require multiple complementary approaches, including a buildout of energy storage, distributed resources, and demand flexibility. Critically, a broader grid footprint must be part of any solution.

A western regional energy market would provide states with the information and transparency they need to cost-effectively meet energy demand. Efficient resource sharing by territories that have excess energy to spare will help ease supply issues across the West while allowing for greater integration of variable renewable energy and reduced renewable energy curtailment. This will reduce the need to dispatch fossil fuel peaking generation plants. Additional benefits include coordinated transmission planning and optimized transmission access, more efficient use of existing infrastructure, and more competition among suppliers that will put downward pressure on the price of electricity. Especially as western states adopt ambitious clean energy targets, a large geographic market footprint is necessary for a successful, deliberate, and responsible transformation of the grid.

In recommending that Nevada pursue western grid regionalization, the committee specifically called on state officials to consider AEE’s Principles for the Creation of Broader Regional Wholesale Markets in the West, which we submitted to the committee early on in its investigation. Those principles include the following:

Committee Chairwoman Daniele Monroe-Moreno, Vice Chair Chris Brooks, and Dr. Averyt have clearly recognized a leadership opportunity for Nevada, and acted to ensure that their state stays front and center as western grid conversations gain momentum. We applaud their actions and implore policymakers across the Western states to follow their lead.