This is not a plan that tinkers around the edges. It is a once-in-a-generation investment in America … I’m convinced that if we act now, in 50 years, people will look back and say, ‘This was the moment America won the future.

It’s nearly Memorial Day, and President Biden’s hoped-for agreement on an infrastructure bill seems to be in doubt given where the negotiations between Republicans and Democrats are after several weeks of discussions. Luckily there is nothing sacred about the Memorial Day target.

However, given how antsy progressive Democrats are to address infrastructure and climate issues, Biden’s target date may prove to be the line in the sand—marking the time the parties retreat to their partisan positions—each blaming the other for any failures.

A quick recap of where the parties are in their negotiations and a bit about the clean energy and climate provisions of the President’s proposed American Jobs Plan (the Jobs Plan or Plan) are in order.

The White House started the bidding on April 1st when it released its $2.25 trillion infrastructure proposal. In addition to conventional infrastructure activities like building and repairing bridges and roads, Biden proposes to spend $400 billion on expanding access to quality, affordable home- or community-based care for aging relatives and people with disabilities.

Other non-traditional infrastructure activities currently in the Plan include an upfront $16 billion program to put hundreds of thousands to work in union jobs plugging oil and gas wells and restoring and reclaiming abandoned coal, hard rock, and uranium mines.

According to the Ohio River Valley Institute, a concerted federal effort to plug abandoned wells in the Kentucky, Ohio, West Virginia, and Pennsylvania region would abate 71,000 metric tons of methane each year and create more than 15,000 jobs annually over two decades.

Assuming the Institute’s numbers are accurate, the program would be a leading example of how decarbonization could simultaneously improve the environment and the economy. It is of critical importance to communities that have relied heavily on the extraction of fossil fuels for their livelihoods and are now feeling the effects of the market’s move away from fossil fuels.

Biden is no novice in the ways of Congress and the need of politicians to produce the goods for their districts and states. The upfront financing of an army of workers in states hard hit by the transition to cleaner energy supplies raises the stakes for senators and representatives who might say “no” to the proposed package.

Figure 1 shows that over $1 trillion of the Jobs Plan would be invested in clean and climate-friendly projects and programs. Biden’s proposed targets reflect his all-government approach to climate policy and give meaning to his pledge of a just transition to a low-carbon economy. 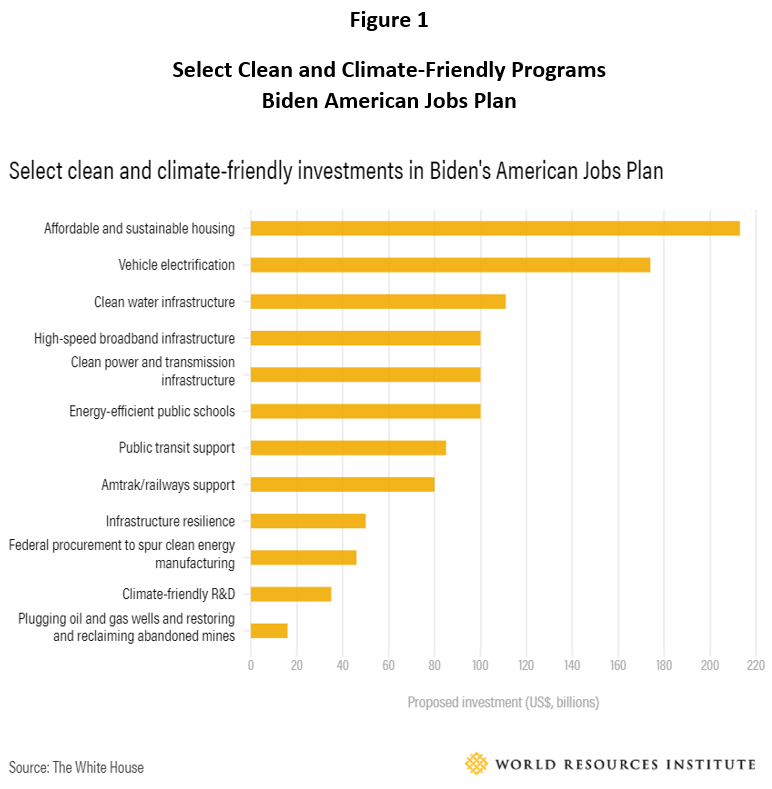 Beyond plugging and capping, the Plan looks to build, preserve, and retrofit more than two million homes and commercial buildings, modernize our nation’s schools and child care facilities, and upgrade veterans’ hospitals and federal buildings.

Biden means what he says about not tinkering around the edges when it comes to making investments in climate-related projects and programs. In retrospect, Democrats believe they didn’t go big enough the last time they captured the White House and Congress. It’s a mistake Biden is deliberately attempting to avoid this time around—particularly as it applies to combatting climate change. 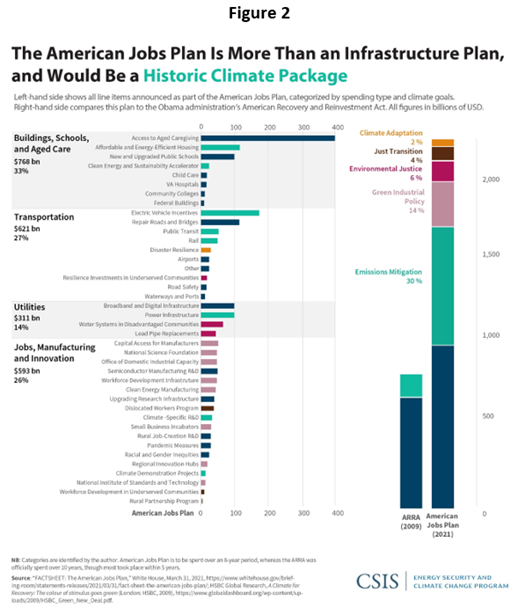 Buried within the Plan is what Lisa Friedman of the New Times calls Biden’s central tool for effectuating a just transition to a decarbonized economy—a national clean energy standard (CES). A form of the CES has been in operation in 29 states as a renewable portfolio standard (RPS).

An RPS requires a specified amount of a state’s electricity to be generated from a clean energy source, e.g., solar and wind. In addition to reducing greenhouse gas emissions, the principal cause of Earth’s warming, portfolio standards have proven relatively popular with ratepayers—both Republican and Democratic.

There’s no getting around the significance of President Biden’s infrastructure plan for putting Americans to work, who might otherwise be left out of an economic recovery, and America on a path towards environmental sustainability. What then are the odds of it happening?

If ever there was a time for Mr. Biden to pull a bipartisan rabbit out of his hat, this is it. The odds of agreement with Republicans are long. Perhaps as long is the chance of a consensus among the Democrats.

The White House’s initial estimate of $2.25 trillion was soundly rejected by the Republicans, who came back with a counterproposal of $568 billion. The critical difference in the offer and counteroffer has less to do with money than how the parties define infrastructure.

Biden and the Democrats have a much more expansive definition of infrastructure—as shown in Figures 1 and 2. Although unconventional, home and community-based care for elderly and disabled people and projects that retrofit homes and educational centers to make them safer and more comfortable go to issues known to limit the full participation of all people in the economy.

It’s not a stretch of the imagination to think that the cost of childcare can be prohibitive even in two-income families. Child and eldercare often require someone—most often the woman—to remain at home rather than on a job.

Neither is it a stretch of the imagination to anticipate the known threat to communities of climate-related weather disasters. Building and retrofitting communities to be resilient to such crises is sound economic and climate policy.

For many Republicans funding resilience and adaptation projects is to admit the reality of climate change. It is much like admitting that Mr. Biden won the presidency fair and square is to admit Mr. Trump is lying.

Biden and the Democrats define infrastructure in more societal terms than Republicans. For them, systemic disparities, e.g., educational inequality, are as critical to the nation’s collective prosperity as a new highway or bridge.

Biden’s build-back better concept is not the same as building back as it was. Why build back to the past when it’s the future where opportunity resides? Why enact an economic recovery program that leaves out a swarm of Americans when their participation would serve to expand economic opportunities?

The White House responded to the Republican offer of $568 billion with a reduced bid of $1.7 billion. It is a counteroffer that White House Press Secretary Psaki has called the art of seeking common ground and that Senator Shelley Moore Capito (R-WV), the lead negotiator, has described as well above the range of what can pass Congress with bipartisan support. Capito highlighted the vast differences that remain on many issues, including the very definition of infrastructure, the price tag, and pay-fors.

It now appears that a new bipartisan bid of around $1 trillion is in the offing. The offer is still $700 million below the most recent White House proposal. It’s unclear at the moment what the $1 trillion counteroffer will contain or whether Biden is interested in continuing the negotiations.

There’s still time for an agreement to be reached. Whether it will, of course, depends on how much further the partisan sides are willing to compromise. The biggest problems for the President may not be the Republicans. It may be getting moderate and progressive congressional Democrats to put their differences aside once again. To their credit, Democrats have been incredibly disciplined over the past few years. Whether moderate and progressive Democrats will continue to cooperate with each other is another matter.

A more contentious issue than intra-party cohesion may be convincing progressives to accommodate the Republicans’ bedrock energy and environment demands of including carbon sequestration, nuclear, and natural gas in any final legislation. The arguments will arise as part of any negotiation over a national clean energy standard.

The Democrat’s Plan B is once again to go it alone—as it did in passing the $1.9 million American Rescue Plan that spurred the economy and softened some of the blow of the pandemic-induced recession. This time around, however, the two sides of the Democratic coin may not be as tolerant of each other or as willing to bend to the will of President Biden.

Democratic control of the House and Senate is by the slimmest of margins. It would take only a single Democrat on the Senate side—without a Republican replacement—to vote against the final package to sink it. Although most talk these days is of moderate senators Manchin and Sinema (D-AZ) as possible dissenters, there are others like Sanders and Markey, who are much beholden to progressive climate groups like the Sunrise Movement and Justice Democrats, to consider.

On the House side, Democrats have a nine-member cushion. However, it would be hardly a problem to find nine progressives who are tiring of compromise and are as beholden to progressive climate groups as Markey and Sanders. Would they vote against the inclusion of nuclear, natural gas, and carbon capture, storage, and utilization in a clean energy standard? Quite possibly, they would.

Splitting the bill in two by stripping out the climate and environmental justice provisions from the Jobs Plan and putting them in separate legislation is tantamount to putting a target on their backs. The same problems of slim Democratic majorities and Republican reticence to expanding the definition of infrastructure to include eldercare and other societal issues would remain.

Realistically, I think an agreed to compromise on Biden’s Jobs Plan is unlikely to be reached by Memorial Day. Speaker Pelosi’s July 4th deadline is more reasonable given all the negotiation that still needs to go on.

Biden’s ace in the hole in all of this is the American people, who seem increasingly to want a federal government to do something for them. Just as a majority of Americans supported Biden’s $1.9 trillion American Rescue Plan, they now seem to favor his Jobs Plan.

In the final analysis, I believe the fate of Biden’s Job Plan will be left to the President and the American people to decide. Will they choose to build back to the future or the past? Only time will tell.

[ii] The actual title of the bill is “Better Utilizing Investments to Leverage Development and Generating Renewable Energy to Electrify the Nation's Infrastructure and Jobs Act.”

Man, what a difference a few Presidential terms makes! I don't even think this is so much as Biden was always the climate / clean energy champion we wanted Obama to be, but rather a reflection of timing and how much ground  has been gained in the climate policy conversation in the past 10+ years

Hopefully we get to see some breakthrough in the typical gridlock you mention here...