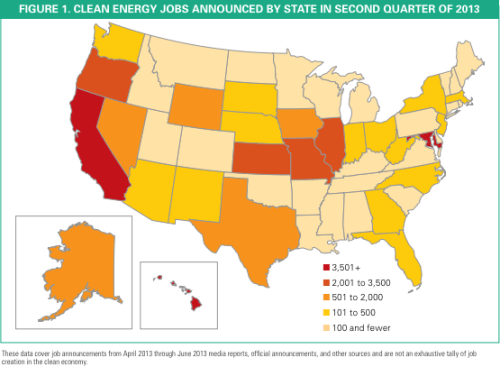 Renewable energy generation was led by solar power and wind energy, representing 31 projects and nearly half of the total green jobs outlook, with more than 13,300 new openings – more than any other sector.

Solar energy projects represented a whopping 10,400 green jobs, equaling 75% of all power generation and 25% of all green jobs. Not to be outdone, wind energy projects chipped in more than 2,500 new positions, up from just 800 in the first quarter.

Public transportation and smart grid/transmission projects followed closely behind renewables, with 9,600 and 8,200 jobs respectively, while energy efficiency rounded out the pack with 5,700 jobs announced.

Interestingly, E2’s analysis didn’t seem to include the fast-growing green building industry, which represented 44% of all US construction jobs in 2012 and could top $140 billion in annual revenue in 2013, according to a recent report from the US Green Building Council.

Toward A Green Economic Future?

But the best may be yet to come, as President Obama formulates the specific details of his climate change mitigation plan. A recent analysis of the economic impacts of cutting carbon by the Natural Resources Defense Council found cutting carbon from power plants alone could create 210,000 jobs – let alone what stable policy for renewable energy could do.

So as America gets ready to enjoy the Labor Day holiday, it’s important to once again consider the potential of a clean energy economy. Green jobs help build a better future in every regard – cleaner air, a healthier environment, and stable jobs.