Natural Gas Performed Heroically In Texas, Until It Didn’t

In a recent article for WIRED — The Energy Sector Must Prepare for More Extreme Weather — I detailed some of the primary causes behind the recent power outages in Texas.

One aspect I didn’t cover in that article was the political finger-pointing that went on as the incident unfolded.

Tucker Carlson blamed wind turbines for the power outages. Texas governor Gregg Abbott followed that up with an appearance on Sean Hannity’s show, stating “’This shows how the Green New Deal would be a deadly deal for the United States of America. Our wind and our solar got shut down, and they were collectively more than 10 percent of our power grid, and that thrust Texas into a situation where it was lacking power on a statewide basis.”’

Democratic Representative and Green New Deal supporter Alexandria Ocasio-Cortez fired back on Twitter with “The infrastructure failures in Texas are quite literally what happens when you *don’t* pursue a Green New Deal.”

How can two sides look at a situation like this and come to polar opposite conclusions about the cause? By telling only a partial story.

I am going to present a full picture below. This first graphic shows how one can conclude that freezing wind turbines were the problem, while natural gas was called upon to fill a huge demand surge. Keep in mind that the natural gas demand below is only from electric utilities, but demand for home heating was simultaneously surging. 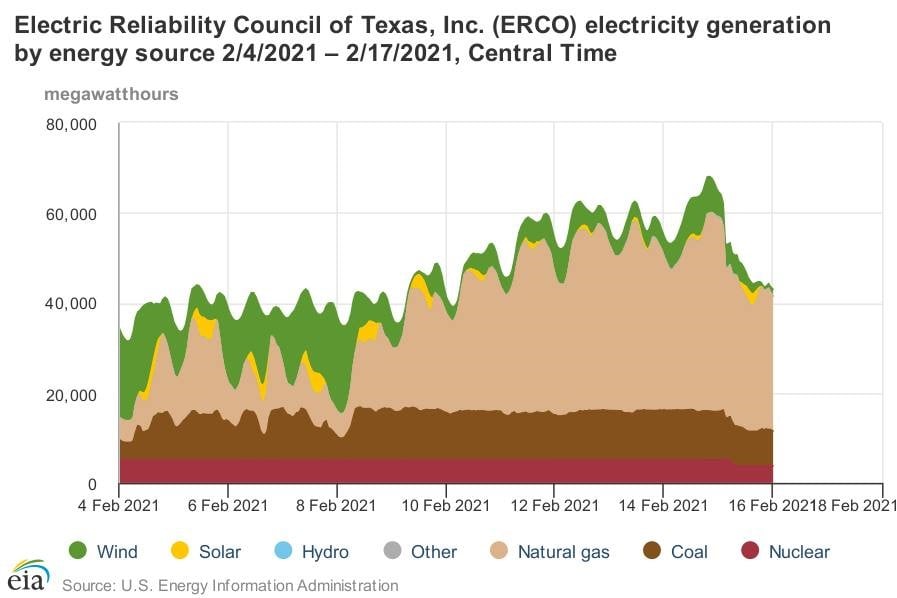 Hence, one could point to this graphic as evidence that between February 8 and February 10, wind power dropped dramatically while power from natural gas came to the rescue. If you only look at this graphic, then natural gas is the hero of the story.

So natural gas was carrying a heavy load during the early stages of the storm, and that is the source of that particular narrative. Natural gas undoubtedly saved lives early in the storm. Of course, that’s what natural gas is meant to do — supply power when needed.

But after several days of exceptionally cold weather across Texas, more trouble started.

Many utilities began to lose natural gas supplies just as power demand was reaching record highs. The result was that the power that natural gas was expected to supply simply wasn’t there when needed, and therefore power outages ensued.

So, neither Tucker Carlson nor Alexandria Ocasio-Cortez are correct. Yes, some wind turbines did freeze up in Texas. Some solar panels were covered with snow. But those power sources are known to be intermittent, and they were not therefore the source of the major power outages.

The big problem was the loss of power from conventional baseload power plants. This is power that is supposed to ramp up when needed.

Natural gas was called upon to fill a massive gap between supply and demand, both for power and for heating. Although natural gas-fired power did surge during the crisis, at the same time natural gas infrastructure was freezing up and preventing it from completely meeting demand.

So, there is plenty of blame to go around, but the biggest factor was with natural gas infrastructure, as detailed in my WIRED article. If natural gas production had not fallen off when demand was greatest, the blackouts could have been largely avoided.

On the other hand, if Texas was being largely powered by wind and solar power — even with battery backups — the situation could have been much worse. Batteries would have been drained early in the storm, and then fast-responding firm power would be required to fill a huge supply gap.

The takeaway for me is that grids need plenty of backup power that is available on demand. This will become increasingly important as more intermittent sources of power are added to the grid. Unless we can ensure that battery backups can survive an outage that could last days — and could substantially increase demand for home heating at the same time — we need firm power sources that are ready to step up and fill the gaps.

Texas thought it had ample backup power sources, but this historic weather event caused the system to fail. Still, the best available options for firm backup power are natural gas and nuclear power. In the future, I suspect more money will be spent adequately winterizing natural gas infrastructure and water lines in these utilities. That is one of the best short-term remedies that could prevent the next crisis.

One aspect I didn’t cover in that article was the political finger-pointing that went on as the incident unfolded.

Way too much of this-- it seems too many people with a stake in it wanted to take to hear the 'don't let a good crisis go unutilized' but failed to let any information (or reality) come out first. Too indicative of the times, sadly. Hopefully cooler heads will prevail as the real post mortem analyses are completed.

On the north end of this cold spell, we in rural Minnesota saw a week without above zero degrees F. Thirty below was common. We have already had over 4 months of snow cover this winter. Still, summer will come, and it will seem like the tropics.

Power lines here were stretched like piano wire in the cold, and will sag in summer. Utility crews here did a fabulous job working on frozen waterways to keep bowed power poles from snapping.

Does natural gas freeze?  Not so sure the natural gas infrastructure was "freezing up" as much as it was without electric power to keep pipelines flowing.

Natural gas production wells froze, as did some of the equipment-- it wasn't just a matter of needing the electricity, it was actually freezing of critical natural gas infrastructure as well:

Texas largely relies on natural gas for power. It wasn’t ready for the extreme cold.

Production of natural gas in the state has plunged, making it difficult for power plants to get the fuel necessary to run the plants. Natural gas power plants usually don’t have very much fuel storage on site, experts said. Instead, the plants rely on the constant flow of natural gas from pipelines that run across the state from areas like the Permian Basin in West Texas to major demand centers like Houston and Dallas.

The systems that get gas from the earth aren’t properly built for cold weather. Operators in West Texas’ Permian Basin, one of the most productive oil fields in the world, are particularly struggling to bring natural gas to the surface, analysts said, as cold weather and snow close wells or cause power outages that prevent pumping the fossil fuels from the ground.

“Gathering lines freeze, and the wells get so cold that they can’t produce,” said Parker Fawcett, a natural gas analyst for S&P Global Platts. “And pumps use electricity, so they’re not even able to lift that gas and liquid, because there’s no power to produce.”