Increased access to low-cost natural gas from the Marcellus Shale and other regional shale plays has driven the switch away from coal in the Northeast United States. Environmental policies at the federal and regional level, such as production tax credits, the Regional Greenhouse Gas Initiative, and renewable portfolio standards, have also contributed to the decline in coal generation. Pennsylvania continues to be a leading coal generator nationally, despite falling by 31%, or 68 million kilowatthours (kWh), between 2006 and 2016. Coal-fired generation in both New York and Connecticut fell by 90% between 2006 and 2016, or by 19 million kWh and 4.1 million kWh, respectively.

Nuclear generators accounted for 33.9% of Northeast generation in 2006 and 34.98% in 2016. Although no new nuclear plants were constructed in the Northeast during this period, one plant, Vermont Yankee, ceased operations in December 2014. Vermont Yankee alone accounted for 72% of total generation in Vermont in 2006. In addition, several nuclear plants in the Northeast region received approvals for uprates that increased their capacities—some increasing by as much as 15%. Other differences in nuclear output in 2006 and 2016 are likely attributable to the timing of maintenance and refueling cycles.

Electricity generation growth from nonhydro renewables came primarily from wind and solar; 93% of the wind plants and all of the utility-scale solar plants currently operating in the region have been installed since 2006. The 30 megawatt Block Island Wind Farm, the first offshore wind project in the United States, began operation in 2016. As of 2016, 2.1 gigawatts of utility-scale solar capacity (plants with at least 1 megawatt of capacity) had been installed in the Northeast region. 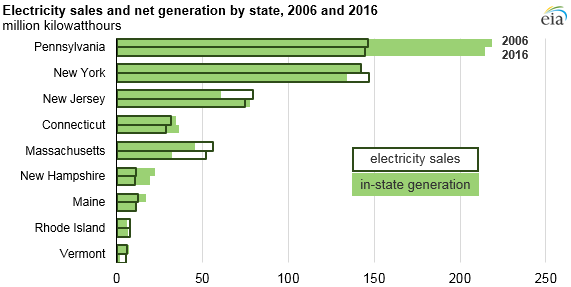 FPL's award-winning customer service coupled with reliability has led to another year of recognition. The study shows the utility is the most trusted electric provider in Florida and ranked fourth among its electric utility peers nationwide. I hope you will join us at Energy Central on Wednesday, July 15th at 1:00pm ET for our webinar on Proactive Planning and Customer Communications for the Next Pandemic.