Moving the Chains Toward 100% Clean Energy in the States 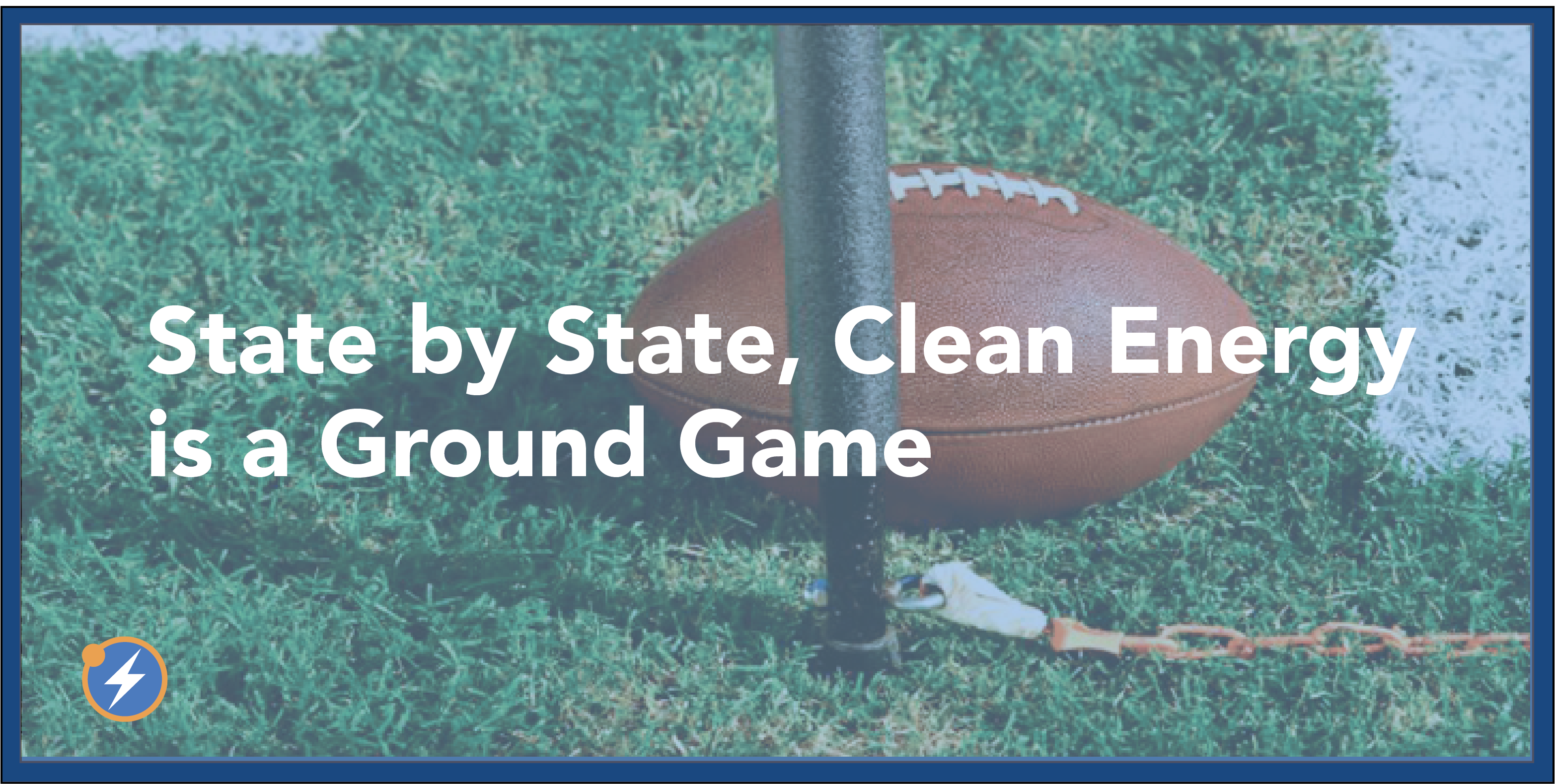 There’s no more exciting play in football than the Hail Mary – a desperate throw to the end zone in hopes of snatching victory from the jaws of defeat. Sometimes it even works (see Doug Flutie, Boston College, 1984). More often, though, it is the ground game that moves the chains, advancing the ball inexorably toward the goal line with every 10-yard gain. So it is with advanced energy, where the march toward 100% clean energy is happening, with little Hail Mary-style spectacle, state by state.

We now may be on the verge of a federal Hail Mary, with the pact between House and Senate Democrats on a framework for the Build Back Better budget bill, with $555 billion in clean energy and climate funding, including $330 billion in tax credits, matched up with components of the bipartisan infrastructure bill. If passed, this would amount to the biggest federal investment in advanced energy development ever made.

While the drama and intrigue behind the federal action has attracted most of the attention this year, progress toward 100% clean energy has continued, more quietly, at the state level. Cases in point: Colorado, Illinois, Nevada, and Virginia.

Taking the largest win first: In September, Illinois approved comprehensive clean energy legislation that will accelerate renewable energy development and extend energy efficiency requirements on the way to fully decarbonizing the electric grid by 2045, as well as electrify the state’s transportation sector. We estimate the market value of the opportunity created by this legislation for advanced energy companies at $37 billion.

Earlier this year, Colorado came through with a package of advanced energy legislation adding up to $51 million of new investment, the bulk of it supporting energy retrofits, electric vehicle charging, and the Colorado Clean Energy Fund, the state’s green bank. In addition, the Rocky Mountain State secured funding of $731 million for electric transportation fleets and charging infrastructure and streamlined transmission planning, while directing its utilities to join a regional transmission organization (RTO) by 2030, which would put Colorado in a bigger market for the development of renewable energy, perhaps throughout the West. We estimate the market opportunity created by this legislation at $8 billion.

Then there was Nevada, which also required its utilities to join an RTO by 2030, adding to the potential Western growth market for advanced energy. This directive was part of a New Economy Act that will invest $100 million in electric transportation infrastructure and boost energy storage, energy efficiency, and zero-carbon resource planning. This legislation will create an estimated market opportunity of $7 billion.

And then Virginia, which followed up its commitment to zero-carbon electricity, in last year’s Clean Economy Act, with a package of bills to electrify transportation. One bill passed this year requires Virginia to adopt Clean Car LEV and ZEV standards – the first in the Southeast to do so – while another tasks the Governor with prioritizing EV infrastructure in an effort to decarbonize Virginia’s economy by 2045. The market opportunity created by these clean-vehicle bills? We estimate it at $1.7 billion.

AEE was deeply engaged in all these legislative breakthroughs, which together will create estimated market opportunities for advanced energy totalling nearly $54 billion.

But such legislative stepping stones toward 100% clean energy don’t come out of nowhere. In most of these, they came in the wake of governors taking a stance in favor of 100% clean energy for their states in their election campaigns. Eight new governors did so on the way to victory in 2018. Several of these politicians, along with scores of legislative hopefuls and incumbents, met with advanced energy executives as candidates through AEE’s decision maker engagement efforts.

Once landmark state legislation is signed into law, next comes implementation, often through regulatory action. Once again, AEE is there. We have been, and continue to be, engaged in a wide range of state utility commission proceedings that are necessary for a full energy transformation, as well as states that have yet to make a full decarbonization commitment. Some examples: Proceedings in New York leading to record procurements of large-scale renewable energy and a $701 million program for EV charging now underway; in Michigan, the MI Power Grid initiative focusing on distribution system planning needed for full incorporation of distributed energy resources (DER), now turning to changes in resource planning in line with the Governor’s Executive Directive on statewide decarbonization; and in California, multiple proceedings to meet that state’s ambitious clean energy and transportation goals, including the DRIVE rulemaking to streamline electric transportation investments and the current investigation into what a high-DER electric grid looks like.

Finally, because the chains don’t move only one way, AEE knows how to play defense. Given the outcome of last week’s election, we will be working to maintain advanced energy’s favorable field position in the Commonwealth of Virginia next year.

All of this is why, in the quest for 100% clean energy in the U.S., states matter. And because states are more ground game than Hail Mary, AEE is committed to persistent engagement with the governors, legislators, and regulators who are working to build an advanced energy economy in the U.S., state by state.