More on the Denatured Molten Salt Reactor from David LeBlanc 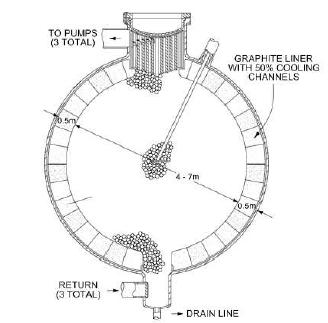 One of the more interesting concepts was the Proposed use of a graphite prble moderator. Graphite swells when exposed to a large amount of neutron radiation. The Pebbles offered a solution to the problems caused by graphite swelling. Once the pebbles swelled enough to cause problems, they could be removed from the reactor core and replaced by new pebbles.
This reactor was largely ignored for 30 years, until David LeBlanc began to study it a few years ago. Our views on the uranium supply have changed radically during the last 30 years. We now believe that uranium is much more abundant at a lower cost than it we believed 30 years. I recently posted a brief discussion on Till and Chang’s case for the IFR. I pointed out that very large amounts of low cost uranium are available, indeed it will take us thousands of years to run out of cheap uranium. In contrast to uranium, plutonium is expensive. Although the DMSR is not a breeder reactor, the design concept borrows freely from ORNL MSBR technology. The DMSR core contains both thorium and uranium fluoride salts. This means that the DMSR breeds U-233 as well as plutonium. Since U-233 is a better fuel in the thermal reactor range, the production of U-233 is highly desirable. Because it uses thorium breeding, as well as U-238 breeding, the DMSR produces more neutrons per neuston capture, and thus, converts in a higher rance than LWRs.
The DMSR will most likely cost less than the LWR, or the IFR, and quite possibly less than coal fired power plants. David LeBlanc points out,

Several previous cost estimates of power production for MSBR type reactors have always been very favorable in comparison to LWR or coal. With the far simpler DMSR which needs no capital and O&M costs for fuel processing the advantage should be even greater. As no fabrication of fuel elements is required and only minor chemical control are needed, fuel cycle cost at present uranium and SWU prices would be only 5 to 6 million per GWe year or under 1 mill/kwh (0.1 cent/kwh), compared to about 50 million for LWR. The start up fissile capital costs are far lower as well (3.5 t 235U for DMSR and no fabrication versus 5 t for PWR plus fabrication or roughly 100 million versus almost 200 million)

While a molten salt reactor does require the expense of an intermediate loop (like a sodium cooled fast reactor) there are numerous areas for major savings. Most come down to the fact that the reactor is so inherently safe. Something like a pump failure is an inconvenience, not a safety issue so components do not require multiple backups and the highly engineered “defense in depth” approach of solid fueled reactors.

In addition the oper

The overall thermal efficiency of the plant is also much higher. 1970s versions expected 44.4% with a super critical steam cycle. With salt inlet/outlets of 565C/705C modern ultra supercritical steam cycles closer to 50% would be possible which would be far more economically attractive than the low efficiency, saturated steam of LWR and CANDU turbines. As well, molten salt reactors are an ideal match to gas brayton cycles, such as multi reheat helium or supercritical carbon dioxide also reaching close to 50%. Gas turbine options offer large cost and rapid production advantages but as seen in recent South African efforts, establishing a “first of kind” turbine is a large hurdle even when the advantages of the “nth” turbine are so attractive. Thus the ability to match well to both steam or gas is a large advantage.

Dr LeBlancs claims coincide with the conclusions of many other people who have reached similar conclusions about MSR cost. Perhaps it is more significant that no one has come up with a plausible case for MSRs being as expensive as LWR, let alone being more expensive.