The “might” of the fossil fuel industry is obvious.

As the following graphic demonstrates, it has captured 6 percent of the global GDP and has convinced policymakers, politicians, and lobbyists that the rest of us should be content picking up the tab for another 7 and 6 percent in the form of fossil fuel subsidies and environmental externalities. The latter, again, mostly due to the burning of fossil fuels. 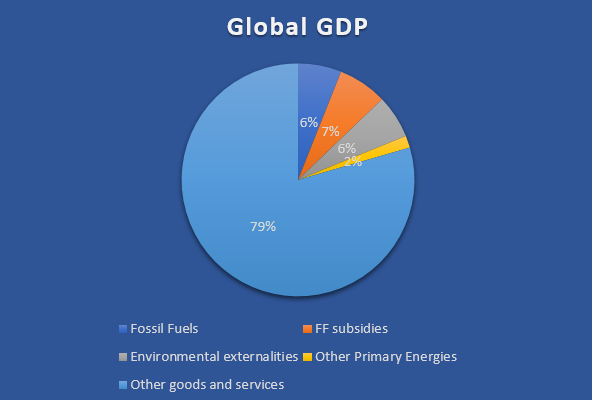 “The right” with respect to climate change is not so cut and dried.

A two-degree warming scenario requires between a 40 and 70 percent cut in carbon emissions by 2050, with a decarbonized or even carbon negative economy by 2100, according to the Intergovernmental Panel on Climate Change.

Some climate scientists assert, however, that the rhetoric around a two-degree scenario is disingenuous and risky.  According to a recent study in Nature Geoscience by Dr. Kevin Anderson, deputy director of the Tyndall Center for Climate Change Research, most scenarios that limit warming to two degrees rely on unrealistic timetables for emissions peaking and untested technologies. As he says, “carbon budgets associated with a two-degree Celsius threshold demand profound and immediate changes to the consumption and production of energy.”

The IPCC, he argues, relies too heavily on carbon negative technologies, geoengineering, and other untested and controversial mechanisms and that to keep to two-degrees warming, CO2 must be removed from the global energy system by 2050.

As was pointed out here, an atmospheric carbon dioxide concentration of 410.31 parts portends an average surface temperature of 1.99°C by 2050 due to the thermal inertia of the oceans. 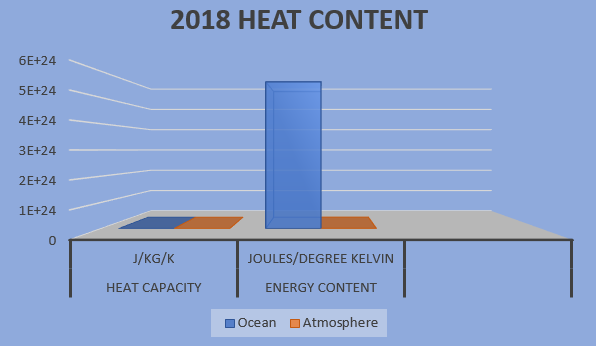 In the paper World ocean heat content and thermosteric sea level change (0–2000 m), 1955–2010 the authors estimated, “if all the heat the oceans have accumulated was instantly transferred to the lower 10 km of the global atmosphere it would result in a volume mean warming of this atmospheric layer by approximately 36°C.”

As indicated in Figure 3, before this heat can be released into the atmosphere, the ocean and the atmospheric must first come into equilibrium. 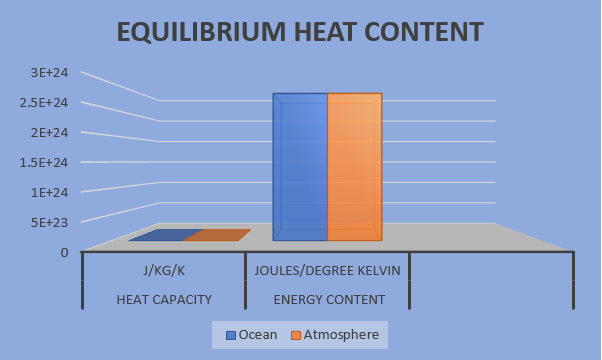 Stefan Rahmstorf, Professor of Physics of the Oceans, Potsdam University, has argued that ocean heat content is an extremely unresponsive policy in comparison with the goal of limiting global warming to below 2°C, because while the increase in global temperature could be stopped within decades by reducing emissions, ocean heat content will continue to increase for at least a thousand years after we have reached zero emissions.

Others, like David Victor, Charles Kennel, and this writer, have argued the opposite. Its  the average global temperature that is not a good indicator of planetary health and therefore climate policy should ditch the 2°C warming goal.

Rahmstorf based his argument on physics.  The average depth of the ocean is 3700 meters deep and it is heated at a power level on the order of ~1 Watt per square meter of the surface. Also, it is heated from above. Warm water floats, which hinders the penetration of heat into the ocean. Therefore, it will take the ocean thousands of years to fully catch up with the surface warming we have already caused.

Consider, however, Figure 4 below. 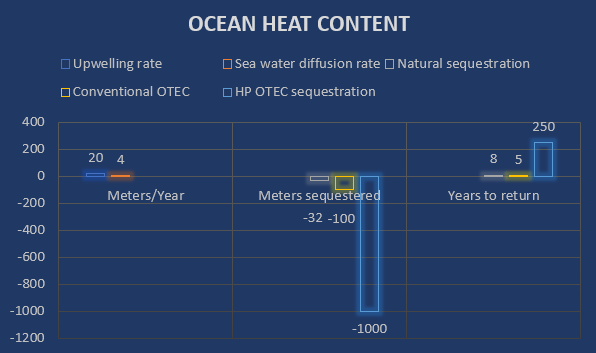 Ocean thermal energy conversion, as its name implies, converts a portion of the heat of warming to useful work.

The conventional approach upwells cold water from a depth of 1,000 meters at a rate of about 20 meters/year to produce maximum power and dumps the residual heat, once it has been processed through a turbine, to at a depth of 100 meters. This heat is then back at the surface in 5 years so there is effectively no net cooling of the oceans.

The other way to process surface heat and produce power is with a heat pipe that moves the heat to a depth of 1,000 thus overcoming Rahmstorf’s concern about heat penetration.

From 1,000 meters it takes 250 years for the residual heat to resurface considering the rate of diffusion of the water is 4 meters/year.

This extends the initial lead time we have with global warming to 250 years and extends the period of surface cooling equally as long.

Back at the surface this heat can be recycled 13 more times, thus deferring the impact of global warming out to the year 5,300.

The Princeton paper The Earth’s Climate Sensitivity and Thermal Inertia estimate the lead time associated with global warming at ≈ 32 years. At the diffusion rate of 4 meters/year, the effective, natural, penetration period of ocean heat is only 8 years compared to the 5 with conventional OTEC and 250 with heat pipe OTEC, per Figure 4.

After emissions have stopped and the ocean and atmosphere have come into equilibrium, the heat of warming will gradually dissipate back into space and the surface will return to the pre-industrial temperature by about the year 5,300 per Figure 5. 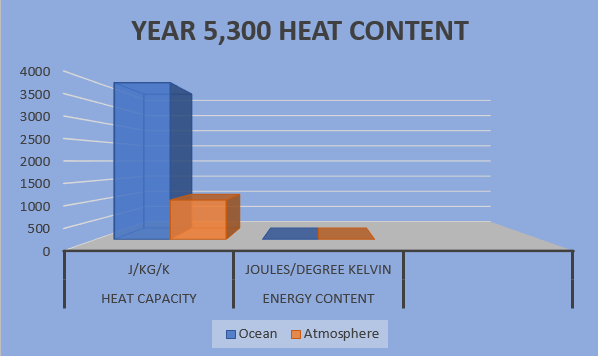 President Obama pointed out, “For almost all countries, progress is going to depend on an inclusive market-based system – one that offers education for every child; that protects collective bargaining and secures the rights of every worker that breaks up monopolies to encourage competition in small and medium-sized businesses; and has laws that root out corruption and ensures fair dealing in business; that maintains some form of progressive taxation so that rich people are still rich but they're giving a little bit back to make sure that everybody else has something to pay for universal health care and retirement security, and invests in infrastructure and scientific research that builds platforms for innovation

As shown here and below, innovation can provide 78 percent more energy than fossil fuels at 78 percent of the cost of fossil fuels, while attenuating sea level rise, storm frequency and intensity and impact on coastal infrastructure and the abatement of global warming, desertification and ocean acidity.

The recent paper, Sensitivity to “sunk costs” in mice, rats, and humans says, “the amount of time already spent on a task influences human choice about whether to continue. This dedicated time, known as the “sunk cost,” reduces the likelihood of giving up the pursuit of a reward, even when there is no indication of likely success.”

The “right” thing is to stop wasting time on fossil fuels.

It’s well past time to do the “right thing” with respect to climate change.