Citing an “eco-conscious population, a growing number of options for going solar, and enticing Federal and state-level incentives”, award-winning solar integrator RevoluSun has released Massacusetts Clean Energy Center data showing that residential solar installations have more than quadrupled between 2010 and 2012 in the state.

The data, alongside economic factors believed to be driving the solar purchasing trend, are outlined in a new RevoluSun infographic. 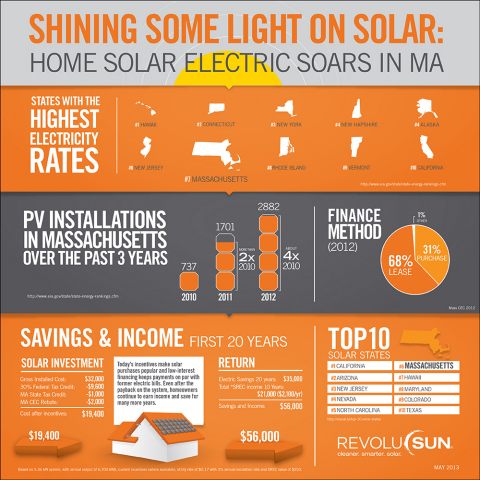 Framingham resident and genetic counselor, Judy Jackson explains, “I always wanted solar panels. After hours of research and scrutinizing every detail and option, I realized how much we would save in electricity costs in addition to the money that would be generated from solar renewable energy credits (SRECs) during the next 10 years. We made the leap and bought 24 high-efficiency solar panels, which cost nearly 40% less after the tax credits and rebate.”

“We have already seen huge returns, greater than RevoluSun estimated, indicating the system is well on its way to helping us financially. Since late January, even with our snowy winter, we produced about 3,000 Kw hours of energy. That’s enough for three SRECs, which have an estimated value of $285 each at the Department of Energy Resources auction,” added Ms. Jackson.

“Massachusetts is adopting solar so quickly that Governor Patrick just announced a new State goal: 1,600 megawatts of solar capacity by 2020 – enough to power 240,000 homes annually,” stated Kip George, President of RevoluSun’s Burlington office. “Mass has the 7thhighest electricity rates in the U.S. but at the same time, Federal and state incentives are tremendous and utilities must meet annual goals for solar electric production, so they’re eager to leverage residential solar power.”

Massachusetts Residential Solar Installations More Than Quadrupled Between 2010 And 2012 was originally published on: CleanTechnica. To read more from CleanTechnica, join over 30,000 others and subscribe to our free RSS feed, follow us on Facebook (also free!), follow us on Twitter, or just visit our homepage (yep, free).