The coronavirus pandemic is a constant reminder that facts matter and that objective reality cannot be wished away.

There are significant parallels between the response to the COVID-19 contagion and what the nation must do to combat and adapt to Earth’s warming. In both cases, national science-based policies must be put in place to address the considerable threats posed by each. Legislation alone, however, is unlikely to prove an adequate response in either case.

Changes in the pace and magnitude necessary to defeat the current contagion or effectuate the transition to a low-carbon sustainable economy have a strong cultural element that cannot be ignored. Millennial activism, for example, has led to a growing investor and consumer preference for companies with high environmental, social, and governance (ESG) scores. Even though those types of companies may be less profitable in terms of their bottom-lines than other investments, they are credited for being beneficial to society. Although laws can be passed to encourage such investments, e.g., a lower tax on gains, a cultural disposition to such investments multiplies their impact and acts to stabilize them should the incentives be removed.

Cultural preference—whether of a corporation or a nation—has much to do with the values and character of its leaders. The current debate over mask-wearing has taken on tribal traits, i.e., cultural. President Trump’s personal stance on these issues, as well as more traditional partisan differences in the way Republicans and Democrats view science and scientists overshadow the scientific evidence that suggests mask-wearing is a critical part of the solution to the unchecked spread of COVID-19.

The tribal phenomenon has lately been much in evidence on Capitol Hill. Speaker Pelosi has ordered all House members to wear masks when attending committee hearings and on the House floor. She has also called for the Centers for Disease Control to issue a federal mandate. Many Republicans in Congress and their White House colleagues, however, have refrained from the use of face coverings—following the lead of President Trump, Senate Majority Leader McConnell (R-KY), and House Minority Leader McCarthy (R-CA).

The difference between Democratic and Republican political leaders has hardly been surprising. It parallels similar differences in the way each “tribe” responds to scientists in general and climate science in particular. Whether the current pandemic will bring Republican perceptions of science in general and the role of scientists in setting government policies remains an open question—although there is growing evidence that change is afoot at least in the case of mask-wearing.

Mask wearing as a partisan issue

There is a strong correlation between mask wearers and non-wearers and party affiliation. According to a June survey by the Pew Research Centers. Eighty-six percent of Democrats and those who lean Democratic always or most always wear a mask in public places as compared to 52 percent of Republicans. The difference between Republicans and Democrats who rarely or never wear a mask in public is respectively 23 and four percent. (Figure 1) 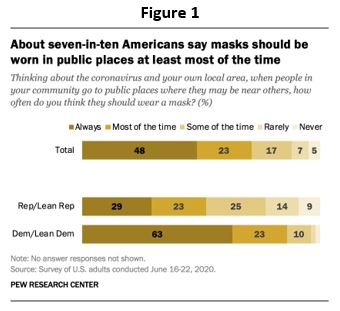 Pew’s findings are consistent with an April Gallup survey on mask usage. Gallup found that 82 percent of Democrats always or sometimes wore a mask outside their homes, while only 54 percent of Republicans did. 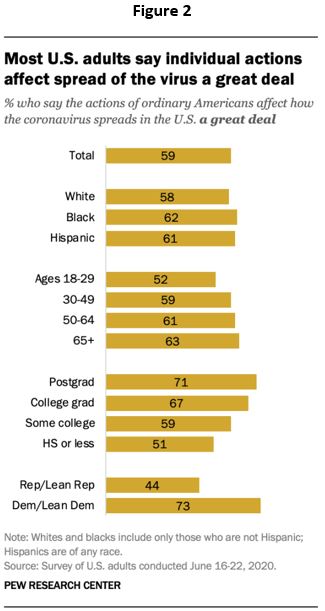 Figure 3 shows an overall difference in the way partisans view scientists. Forty-seven percent of Democrats and Democratic-leaning independents say environmental research scientists provide fair and accurate information all or most of the time. However, only 19 percent of comparable Republicans hold a similar view. Medical doctors enjoy the most trust relative to other scientists and are the only example of Republicans exhibiting a higher rate of trust than Democrats (52 versus 46 percent respectively). 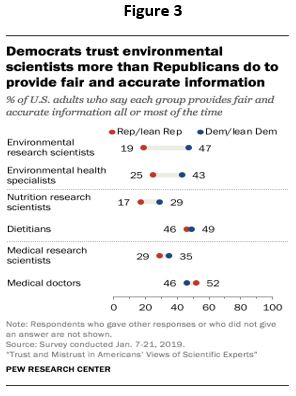 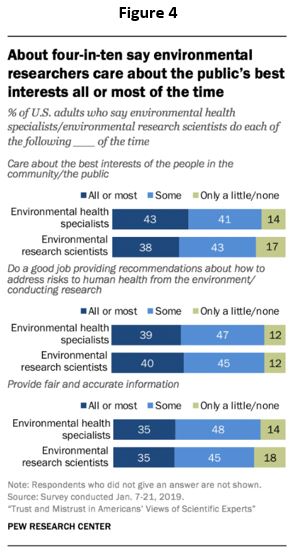 Interestingly medical doctors engender mixed reactions from Americans. Although nearly three-quarters (74 percent) of those surveyed have mostly positive feelings towards doctors overall, less than half (48 percent) believe they provide fair and accurate information all or most of the time. (Figure 5)

Only 15 percent of respondents consider doctors transparent about conflicts of interest, while only 12 percent believe a sawbones will admit and take responsibility for their mistakes. (Figure 5) 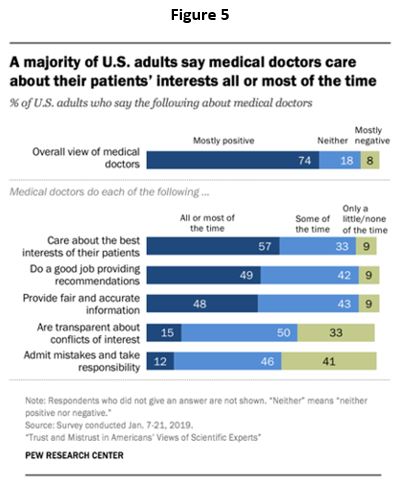 Given the generally low esteem of both Democrats and Republicans for the scientific community, including physicians, it’s hardly surprising that fewer than half of all Americans see scientific experts making better science-based decisions than anyone else when it comes to policy. Although Democrats are more inclined (54 percent) to think better of scientists than the general population, the numbers are hardly overwhelming. (Figure 6)

It is somewhat startling that fully two-thirds of Republicans (65 percent) say that scientists are either no better or worse at making policy decisions on subjects in their field than the average Joe or Jane on the street. (Figure 6) However, it does help to explain why President Trump can get away with some of the comments he does.

Trump has claimed, for example, a genius for science because of genes he shares with his famed uncle, who taught physics at the Massachusetts Institute of Technology.

The widespread mistrust of Republicans towards science and scientists creates quite a quandary. How can government be expected to devise and deploy evidence-based policies when a significant portion of the electorate questions the motives and work of those who would be expected to find and validate the necessary facts? 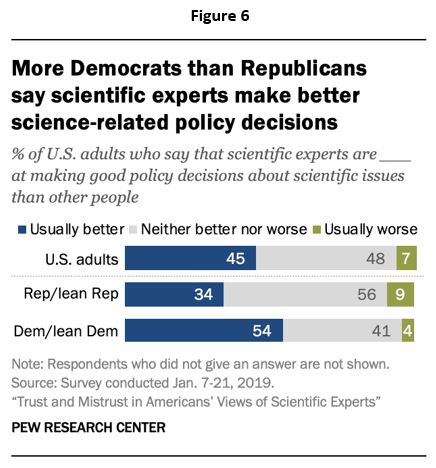 Is it the message or the messenger?

Early on, government scientists, including Surgeon General Adams, encouraged people NOT to purchase or wear masks—often stating there was no evidence to suggest that mask-wearing was effective at either protecting the wearer or the community at large against the spread of the COVID-19 disease. Professional opinions on the wearing of masks have changed radically in recent weeks; they are now seen as a critical part of preventing the spread of the virus--particularly in red states.

In testimony before Congress, the head of the US National Institute of Allergy and Infectious Diseases, Dr. Anthony Fauci, explained that initially he and other government officials didn’t want the public competing with frontline healthcare workers for the limited supplies. Now Surgeon General Adams calls masks instruments of freedom. Anecdotal evidence suggests that Dr. Fauci’s explanation was viewed suspiciously—many believing that the early statement was driven by politics rather than the research.

What traditional partisan differences about science and scientists don’t account for is the virulence with which certain members of the population resist mask-wearing. Beyond the partisan divide, many of the no-maskers exhibit the classic characteristics of a core Trump supporter.

A Gallup poll conducted in mid-April generally agreed with the findings of Pew researchers on the mask question. Gallup also found correlations between mask-wearing and education levels and gender.

Over 40 percent of those respondents with no education beyond high school never wore a mask. Sixty-three percent of the men surveyed by Gallup always or sometimes wore a cloth face-covering compared to 83 percent of women. Characteristics that are common among Trump’s core supporters.

The passion of many of the sans-maskers is equally a quality of many of the President’s staunchest believers. Many mask opponents believe themselves imbued with the same revolutionary spirit that birthed the nation—especially now that Mr. Trump has decided to make the 2020 election a culture war.

Trump and many of his supporters claim mandatory mask orders violate their constitutional right of unfettered personal liberty—in much the same way they consider the right to bear arms. Demonstrators—some of them armed with assault rifles—have been marching outside state capitols carrying signs reading Freedom Trumps Safety and Communism, Socialism Sucks, and Stop the Madness, It’s Just a Cold Virus. The President’s tweets to liberate their states have stoked demonstrators in Minnesota, Michigan, and states led by Democratic governors who were slow to lift their lockdown orders.

Relatively peaceful protests outside of state capitols are one thing. But resistance to the mask is going beyond the right to petition the government in some jurisdictions. A Lewis County sheriff in Washington state, for example, has refused to enforce Governor Inslee’s (D) lawful mask order. As reported by the Washington Post, he is far from alone.

Sheriffs In Nevada and North Carolina  and multiple other sheriffs said their Democratic governors’ mask requirements were “unconstitutional and unenforceable.” Neither the lawfulness of those orders nor their constitutionality is for sheriffs to decide. These are questions for the courts. The refusal to enforce as well as obey comes close to the definition of anarchy.

An analysis by the Marshall Project found at least 60 sheriffs across a dozen states were publicly resisting stay-at-home orders and other virus-related restrictions issued by governors. Three-quarters of those sheriffs were in states governed by Democrats.

Mask orders, or the lack of, are also pitting mayors against governors—particularly in red states where they are of opposite parties. Urban populations have a particular need for masks and social distancing because of population densities—as compared to rural communities. Pre-emption by governors of mayoral orders is a clear contributor to the recent alarming rise of COVID-19 infection rates.

The lessons of today’s mask story are not to be taken lightly. It is absurd in the extreme even to be discussing something that is so much a part of the solution to the spread of the current contagion as covering one’s nose and mouth with a bit of fabric.

Successful responses to existential threats to the economic and physical wellbeing of the nation as great as those posed by pandemics and climate change require national science-based policies based on truth rather than political relativity. Enlightened policies, however, will only come about through enlightened leadership by example.

It is all well and good that the very Republicans who have belittled the wearing of masks on Capitol Hill are now having second thoughts about their public displays of defiance. However, it is more than possible, that these changes of heart are coming too late to halt the current wave of contagion sweeping across southern portions of the nation.

It is still not too late to slow the rate of Earth’s warming and assist communities to adapt to the coming tide of a changing climate. However, as always, time is of the essence. It should not be squandered by ignoring inconvenient truths.