Marine Power Will Be Cost Competitive in 14 Years 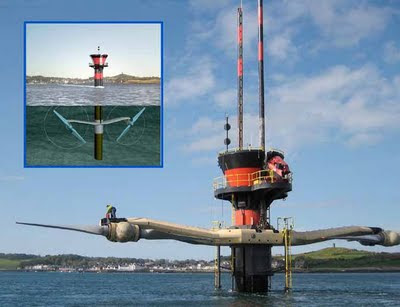 The best marine energy sites could be cost-competitive with nuclear and onshore wind by 2025 with accelerated and targeted innovation, according to a new report from the Carbon Trust.

The report is based on an evaluation of the Carbon Trust’s £3.5 million Marine Energy Accelerator (MEA) programme of support for technology innovation.

It calculates that there is enough practically harvestable marine energy to provide for around 20% of the UK’s electricity consumption in 2025.

With sufficient effort on innovation, costs of will come down to around 28p/KWh for wave and 16p/kWh for tidal stream by the time the industry is half way through developing its most energetic sites.

These costs, particularly of wave power, could fall even faster if other countries install significant capacity as they are planning.

The report analyses the latest evidence on the practical marine energy resource and puts the wave resource at 50 tera-watt-hours per year (TWh/yr) and tidal (stream and flow) at 20.6 TWh/yr. This is broadly the same as previous studies.

Costs are very site-specific, though; for example energy would be cheapest at Pentland Firth Deep – the biggest and the most energetic site – with over 6 TWh/yr of potential.

Estimating the future costs is also complex because of the many competing different emerging technologies with many components, such as cables, moorings and turbine blades, very few of which have been proven over significant periods of time in these harsh environments.

However, the first generation machines that have been tested in real conditions under the MEA do provide sufficient experience to give a reasonable estimate.

The report makes recommendations about what should happen over the first, second and third generations of implemented plants, each generation representing about five years of development.

It finds that installation costs can be lowered, as can the ability to tackle deeper sites. Marine Current Turbines (MCT)’s first-generation tidal device, currently being tested in Strangford Lough, is only suitable for shallow and relatively low wave sites.

But future iterations of the device will be able to deploy many more rotors in a single operation and access depths of over 40 metres and a more extreme tidal range. Significantly, version two will have a 20% lower capital cost per megawatt.

By the 2020s, third generation tidal flow machines will be able to generate electricity economically from sites with velocities too low to have been included in the main resource study.

As technology companies move towards 5MW projects – likely to require investments in the region of £30m-£50m – they will be working with developers to find equity investments in projects while also looking for continued investment at the company level. It is anticipated that it is utilities and project developers who will take the biggest stakes in marine energy farms.

A number of consortia have already formed with a view to developing commercial farms sites in the Orkney Waters Strategic Area identified by The Crown Estate.

These companies will have to install pre-commercial farms of around 5MW at these sites before technology is sufficiently developed for the 100MW+ farms they are planning.

To make this happen the Carbon Trust says that the government needs to create a stable framework for revenue support as well as capital support to enable developers to build the first tens and hundreds of megawatts of early commercial farms.

There also needs to be a clear position on planning for marine energy, with a streamlined consenting process and Strategic Environmental Assessments completed for some regions.

The Crown Estate, as owner of the seabed, must set out a roadmap for the wave and tidal industry.

The industry also needs to make a big push the technology innovation.

The stakes are high, but the rewards are fabulous, not only for the UK but for exporting the technology around the world, because already the UK is a world leader in this field.