As if displaced desert tortoises, burned birds and political theater around the loan guarantee program weren’t enough problems for the Ivanpah concentrating solar project, the owners are now dealing with lower-than-expected electricity production.

From January to August of this year, the 392-megawatt plant generated far less than the electricity expected. For some, it’s yet more proof of the technical limitations of solar — and an example of another bungled government investment in clean energy.

But there’s a simpler explanation for the early woes faced by Ivanpah: a spurt of bad weather.

“The developer [BrightSource Energy] understood the full implications of having a bad year when planning. “They were disappointed it wasn’t sunnier, but they weren’t surprised,” said Gwendalyn Bender, an assessment services project manager for Vaisala, a company that measures industrial processes, including weather for renewable power plants.

It wasn’t just weather. BrightSource said some early equipment issues “impacted plant availability” as it ramped up to four-year targets. But a poor summer made things worse.

Vaisala (which bought the resource analysis company 3TIER last year) produces data sets on resource variability for wind and solar project developers. When analysts at the company looked at this year’s solar irradiance, they found wild swings in the number of sunny days in the Western U.S. 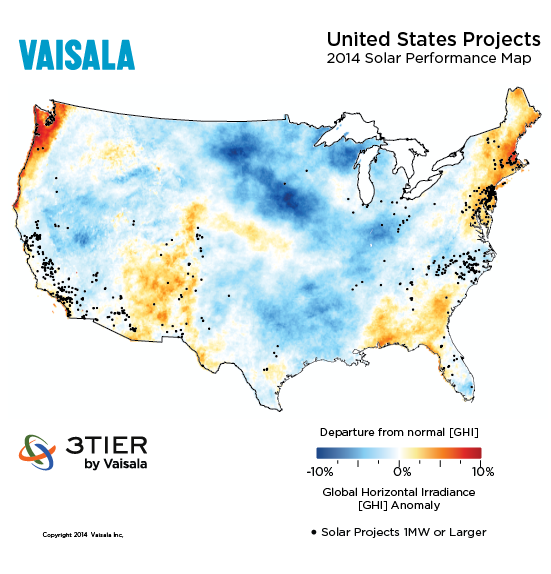 The wind and sun are free resources. But if the weather isn’t cooperating, developers can take a big financial hit. Ivanpah, which is operated by NRG Energy and partly owned by Google and BrightSource, generated millions of dollars less than expected.

The project owners are now taking advantage of cash grants from the Treasury to help repay their initial loan from the Department of Energy. They’re also burning more natural gas to make up for the drop in electricity output.

“Industry-wide figures suggest that a 5% negative anomaly in solar irradiation during the summer months for a CSP or PV site can translate to a 1% to 1.5% decrease in annual revenue for a solar developer or operator, highlighting a clear industry requirement to take a more comprehensive approach to gathering long-term weather data,” wrote Vaisala its analysis of 2014 solar irradiance.

Here’s how that variability broke down by month this summer: 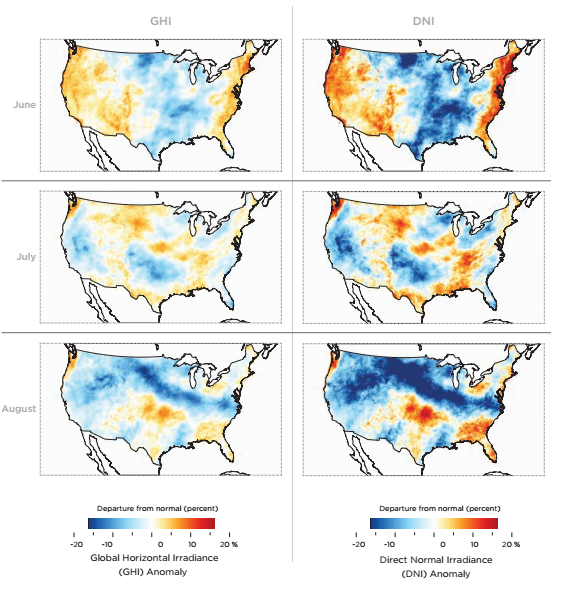 “A lot of developers that aren’t analyzing an entire time series can be totally blindsided when they have a big issue,” said Bender in an interview. “You can be really surprised when there’s a bad year and not understand what’s going on.”

NRG, Google and BrightSource are likely very unhappy with initial performance. But with more than a decade worth of data, they knew a dramatic change was a possibility.

Bender said that most solar project developers assess resource availability based only on one modeled year of irradiance data. In order to account for change, developers commonly assume a 2 percent drop in resources. But as the 2014 California/Nevada data proves, the change can be far more dramatic.

The problem can go the other way as well. If developers assume too much variability risk because of limited modeling, they can “leave money on the table” when securing financing, said Bender.

Editor’s Note: This article has been updated since publication. Where it previously read “hundreds of thousands of dollars” it has been changed to “millions of dollars.”

I’m not sure I buy this explanation.

The projected capacity factor of Ivanpah was supposed to be around 29.4%.

From the EIA website, through September, actual production has been 298 GWH. This means the actual capacity factor has been 298000/(377*.75*8760) = 12%. This period includes the summer which presumably is expected to have the highest capacity factor.

The irradiation graph you present above looks like 2014 has had about 5% less irradiation at the Ivanpah location than expected.

If you look at the EIA website, you can see the actual quarterly production of Ivanpah I, II, and III.
In GWHs they are:

The three units are the same size, but their outputs are wildly different. They are all right next to each other, so I am rather doubtful that the reason for this because of differences in solar irradiation.

Unless I’m way off in locating Ivanpah on the map, you are suggesting that a solar irradiance level 2 to 3% lower than average resulted in a production loss of 75%. This makes the excuse “The dog ate my homework” seem brilliant! It also makes Solyndra look like a blue chip investment.

Jeffrey, there you go again ruining everything with facts.

Very intriguing. Ivanpah’s owners are also casting some blame toward technical adjustments, which in truth is fair – it’s the largest CSP in the world (by far) so issues can be expected and I would anticipate a performance improvement in 2015.

I did a little digging myself and discovered that BrightSource has been permitted to generate 200GWh/year by burning natural gas at Ivanpah, which translates to about half of this year’s generation:

In its March petition to California regulators [PDF], Ivanpah’s owners said it was only through running the plant that they realized “more boiler steam would be needed than previously expected in order to operate the system efficiently and in a manner that protects plant equipment, and to maximize solar electricity generation.” They added that “auxiliary boilers typically need to operate an average of approximately 4.5 hours a day during startup (an increase from 1 hour daily average originally expected).”

Under the original certification, “total annual natural gas fuel heat input” was not to exceed “5 percent of the total annual heat input from the sun” at each of the three Ivanpah units. That provision has been struck, and now BrightSource can burn a total of 1,575 million standard cubic feet of natural gas every year. To get a sense of that volume, an average U.S. natural gas-fired power plant might be expected to produce about 200,000 MWh from 1,575 mmcf of gas, according to the EIA.

I can’t tell whether the gas generation is included in the figures on the EIA website, do you know?

I don’t know if that is included. I would expect there to be a learning curve because, as you note, the plant is new but a factor of 2.5 (assuming the gas is not included) seems pretty wide of the mark …

The Brightsource direct-steam generation technology always struck me as a shortsighted choice.  I much prefer CSP with thermal energy storage, such as the Solar Reserve technology used at Cresent Dunes.  Not only does storage allow the plant to run past the end of the evening demand peak, but the plant could stay on-line for passing clouds, and maintain revenue in an increasingly PV dominated grid.

So, Ivanpah is underperforming due in part to The Weather? Well I’ll be…..Hasn’t that always been the problem sighted against unreliable, nondispatchable, weather related power?

The numbers in my head do not add up either even as a -10%. Clearly though this shows the effect of putting solar in a cloudy region; don’t. A lot of wasted money for that though.

Whats more lets just say I have all three giving the maximum output for 4 quaters (49GWh), that would still only bring me to 588GWh.

To get the 971GWh figures, each unit would need to pump out an average of ~80.9GWh. Thus the plant at its best current perofrmance, assumed for all units, is only producing 60% of its suggested capacity (=49/80.9).

So the wizards at the DOE have bet poorly using taxpayer money. Can we fire them?

DOE motto: “It’s only money and it’s not even ours!”

5% less irradiance may translate into 5% less power from a PV panel.  However, at Ivanpah that irradiance is driving a thermodynalic cycle and its efficiency is goverend by Mr. Carnot.  A drop in the high temperature can have a major impact on the cycle efficiency meaning that 5% drop will be greatly exaggerated.  Also, does anyone here understand that this is an experimental facility and there may be bugs to be worked out?

Am yes we understand it is an experimental facility, we are not idiots. You can see reference to this several times in the comments below. If a 5% drop in irradiance is what is causing a 75% drop in output, then we can shelve this and move on. You do understand that demostration plants are there to prove or disprove the viability of a process?

As I said that 5% does not explain why the best % output any unit has gotten for any 1/4er from its rated capacity is 60%.

“Not only does storage allow the plant to run past the end of the evening demand peak, “

Ivanpah does indeed run into the evening by use of its natural gas connection.