Making Hydrogen a Matter of Principle(s) 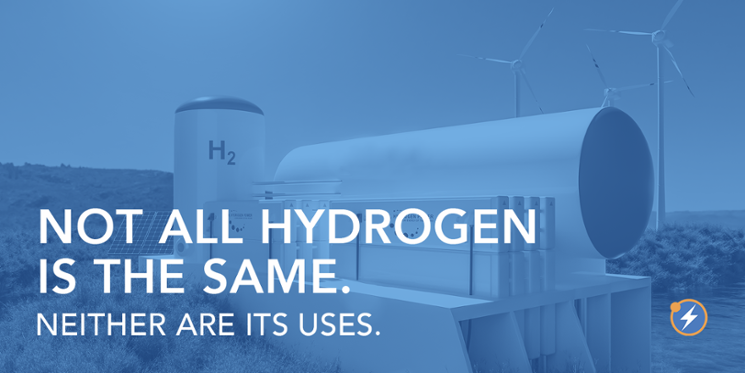 As policymakers, industry, and advocates lean into the challenge of decarbonizing the economy, hydrogen has for some become the New New Thing, an energy source that gives off no harmful emissions and is not dependent on the weather. As with many technologies that experience a surge in interest, there is both excitement and skepticism about hydrogen as a clean energy source, prompting AEE to ask: What is the appropriate role of hydrogen in an advanced energy economy? What should policymakers be considering when hydrogen is proposed as a solution for reaching a 100% clean energy future? We don’t have all the answers to these questions, but we do have a set of principles for approaching them.

Across the country, there has been an uptick this year in bills before state legislatures dealing with hydrogen as an energy resource. According to the National Conference of State Legislatures, there were 82 hydrogen-related bills across 21 states introduced in 2022 – more bills in more states than ever before. This legislative interest stems from a combination of factors: utilities looking for ways to decarbonize their operations, a budding fuel cell vehicle market, a growing focus on building decarbonization, and of course, $8 billion in the federal Infrastructure Investment and Jobs Act for regional clean hydrogen hubs.

But not all hydrogen is the same; neither are all the ways it could potentially be used. As a result, there are many questions to be answered about what forms of hydrogen production are worthy of support, what uses are worth the public paying for, and what will ultimately help us achieve 100% clean energy.

Over the past few months, AEE and its member companies have been grappling with these questions, and have come up with a set of principles to guide our own engagement on hydrogen, as well as what we would like to see policymakers think about when faced with proposals for public support of hydrogen-based technologies.

To start, it’s important to recognize that there are multiple ways to produce hydrogen, with the resulting fuel characterized by different colors. Green hydrogen is produced by electrolyzing water using renewable energy, making it zero-carbon, while grey hydrogen – most of what is commercially available today – is produced using the conventional method of steam methane reforming, a high-emissions process. Blue hydrogen is also produced by steam methane reforming but with carbon capture technology, which reduces the associated carbon dioxide emissions, although not all the way to zero. Pink hydrogen, like the green variety, is produced by electrolyzing water but powered by nuclear energy instead of renewables.

Focusing as we do on the ultimate goal of 100% clean energy, AEE uses the term “clean hydrogen,” meaning any hydrogen produced using zero-carbon energy resources, as the variety of hydrogen that we would see as potentially worthy of policymaker support. This includes hydrogen from both renewables and nuclear power, and depending on the state or other policy venue, it can also include hydrogen produced using any additional resources that qualify for that jurisdiction’s renewable portfolio or clean electricity standard.

There are many potential uses for clean hydrogen, including as a replacement for natural gas (heating for high-temperature industrial processes, residential appliances, hydrogen-powered turbines), as an alternative to existing transportation fuels (fuel cell vehicles, trucking, maritime shipping, aviation), or as an energy storage solution (such as by pairing an electrolyzer with a fuel cell). Within these categories of potential uses, applications may vary in practicality, costs, and benefits.

For instance, blending a portion of clean hydrogen with natural gas can reduce carbon emissions incrementally, but there are questions about sending higher levels of hydrogen to retail natural gas customers through a network of pipes not designed to handle hydrogen, to furnaces and stoves not designed to burn hydrogen. And while hydrogen may hold promise for long-haul trucking or maritime transportation, it is harder to see its value in light-duty vehicles, where electric vehicles are already establishing themselves as more viable alternatives to gasoline-powered cars. AEE does not take a blanket position for or against specific clean hydrogen applications, although we generally believe that hydrogen is best suited for applications where electrification is not a viable option. Above all, any proposed use needs to be cost-effective, safe, and result in a net benefit for the environment.

Our next consideration was who should pay for clean hydrogen projects. AEE’s position is that public investment (i.e., taxpayer-funded investment) should focus on technologies that are pre-competitive and on applications that lack commercially viable alternatives. For projects that will ultimately be financed by utility ratepayers, we believe that clean hydrogen projects should be treated like any other solution, with utilities considering the costs and benefits, using the same analysis or cost-effectiveness tests that would be applied to other investments that could meet the defined need. Lastly, it is critical that policymakers consider the full range of infrastructure that might be needed to support a clean hydrogen project or projects, such as pipelines or storage facilities, and factor the costs of that infrastructure into their assessments.

Our principles also outline some additional questions for policymakers when considering clean hydrogen legislation, regulations, or funding. Will the proposed application reduce the use of fossil fuels or lifecycle emissions? Does the production or use of clean hydrogen reduce curtailment of renewable energy, or lead to additional renewable energy generation? Does it lead to an increase in local air pollution or otherwise exacerbate environmental justice issues? Will it provide employment opportunities to disadvantaged communities? Does the water required to produce clean hydrogen place undue stress on an area’s existing water resources? Is the proposed application consistent with AEE’s goal of 100% clean energy?

As the energy transition continues, clean hydrogen potentially has much to offer. There is still much to be learned about the resource and potential applications that are not yet commercially viable but are already generating controversy. AEE puts forward its principles, in “Clean Hydrogen’s Role in an Advanced Energy Economy,” as guidelines for the explorations and conversations to come as hydrogen options become more tangible. Download the document by clicking below.