Far from the cable TV news studios, political pundits, politicians including some who claim Climate Change is a Chinese made up hoax along with the fossil fuel special interest groups who support climate denial, is a growing group of U.S. insurance and investment bankers and major legal firms increasingly focused on the short and long term financial risks from Climate Change. Their overall message is financial risks from Climate Change are rapidly increasing and with it, a painful and massive wave of financial implications are now in sight. So we ask today, who are these firms, what are they saying about these risks and where can we learn more?

In its latest report on financial risk implications of Climate Change, "Taking The Heat: Making Cities More Resilient To Climate Change"   Goldman Sachs cites several major Climate Change financial implications regarding the uncertain timing and scope of global warming, how changing weather might reshape the earth and implications for shoreline cities need for solutions. With these concerns, the issues of large infrastructure build-outs needed for adaption, along with the financing and fairness which goes with these.

The report states, “There are two key drivers of ongoing global warming. The first is net greenhouse gas emissions, principally of carbon dioxide (CO2). Such emissions would need to be cut dramatically in order to significantly curtail the trajectory of climate change, according to most climate scientists. The second reason is to expect ongoing climate change is past greenhouse gas emissions. Even if current emissions were actually to reach net zero in the next few years, climate scientists indicate that emissions that are already in the atmosphere are likely to warm the earth for decades to come.”

Regarding the controversial topic of repeated damage to waterfront properties, Goldman states, “Insurance can also help to finance adaptation efforts. “ While subsidized insurance for property in flood- or fire-prone areas is often politically popular, it encourages building and post-disaster rebuilding in areas that remain demonstrably vulnerable to climate change, particularly flooding and wildfires.”

Millions of residential homeowners at risk for increased flood damages

Their latest public flooding risk assessment report titled,   "Sizing The Personal Flood Market" , estimates today there are 62 million residential properties in the U.S. which are now deemed as moderate to extreme flood risk wherein person flood insurance premiums are in the range $41.6 Billion within the 48 U.S. contiguous states.

Verisk states how more frequent weather-related flooding is increasing with the federal National Flood Insurance Program (NFIP) facing growing financial strains as a result. How only less than one-third of at-risk property owners have flood insurance mainly through NFIP.

“Recent flooding events have challenged the long-held perception that flood insurance is only for those homes in FEMA high-hazard zones or along the coast,” said Marc Treacy, Managing Director for flood insurance at Versik.

The report also provides a detailed map showing where ongoing flood risk is by the degree of severity in which Verisk states FEMA flood zone risk maps, the basis for the NFIP while generally perceived to provide complete and accurate flood risk information, are often outdated, incomplete, and at times inaccurate.

The report then provides estimates for flood insurance premiums in Metro New York including Westchester County, Dallas and Tarrant Counties in Texas, along with Jefferson and Parish Counties in Louisiana.

In a recent article dated October 24, 2019, from Fortune’s Jeffery Ball titled, Climate Change Is Hitting the Insurance Industry Hard. Here’s How Swiss Re Is Adapting, Mr. Ball, writes about how global re-insurance giant SwissRe, the 155-year-old $36.4 billion dollar firm who is in the business of insuring insurers, has it’s “Executives anxiously are weighing the insurer’s financial exposure to some of its biggest clients. Ph.D. scientists are poring over algorithms to figure out how to cope with ballooning costs. Under intensifying pressure, they’re questioning much of what they know about assessing risk—and making decisions that could redirect billions of dollars.”

In which SwissRe’s scientists, risk analysts using detailed and historical computer models calculations now see an increasingly troubling pattern of more severe weather events. However, what they cannot predict with a reasonable degree of accuracy is the future of these trends. 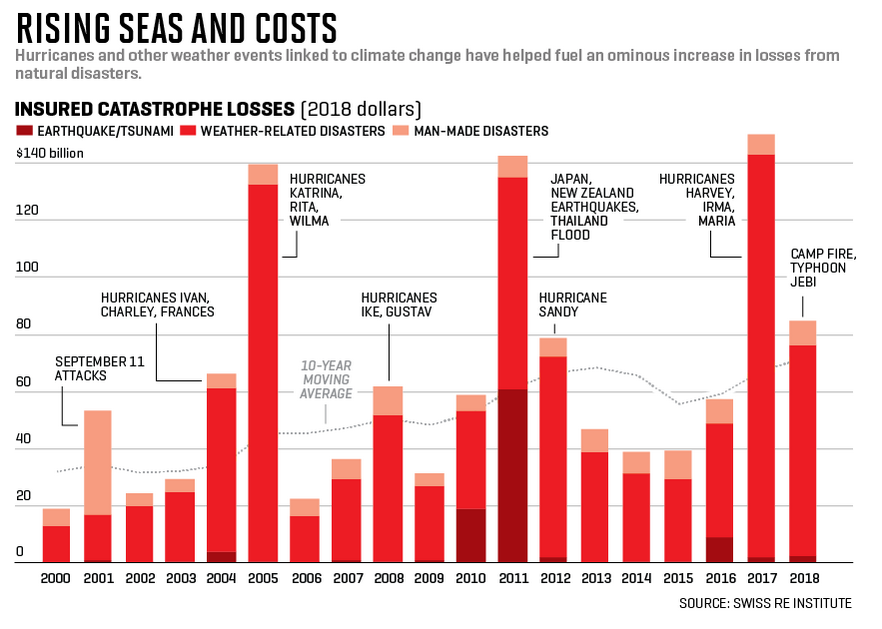 Mr. Ball writes, “Death and destruction are Swiss Re’s bread and butter. But what the company finds existentially worrisome about climate change, says J. Eric Smith, Swiss Re’s Americas chief, is that, as the world warms, the company’s “ability to predict frequency” in assessing the future flow of mayhem “is becoming a little shaky.” Smith describes discussions he has had with his fellow executives: “What we say in private is, ‘My gosh, we’ve had two bad years, and now we’re going to have a third bad year?’ ” The crush of intense hurricanes is, “ just not right. It’s just not normal that this is happening year after year.”

Ball reports SwissRe is not alone in these concerns. His article highlights how “This year alone, Norway’s sovereign-wealth fund, the world’s largest, said it’s divesting its holdings in pure-play oil-and-gas exploration and production companies, and the Bank of England asked U.K. insurers to assess how climate change might affect their returns. In the past couple of years, many of the world’s biggest insurers and reinsurers—among them Germany’s Allianz and Munich Re, France’s AXA and SCOR, and Chubb, whose biggest market is the U.S.—have announced they are pulling back their coal exposure, either in their investments, their insurance books, or both.”

On the legal front, an increasing rate of major lawsuits regarding the financial impacts of Climate Change

An excellent recent report issued by Senior Counsel Mr. Adam D. Krauss, Esq. and Partner of  Traub Lieberman Straus & Shrewsberry LLP titled, "Impact of Climate Change on the (Re)insurance Market" writes, “Climate litigation has been on a steady increase for the past decade across jurisdictions. In early 2017, there were over 1,200 laws and policies related to climate change in 164 countries, while in 1997 there were only 60. Outside the U.S., approximately 64 climate cases have been filed in the past 15 years, at least 21 of which have been filed since 2015.

Krauss writes, “In the USA seven climate lawsuits were filed against fossil fuel companies in 2017, and six in 2018. This rise can be attributed to advancements in science and economics modeling, the discovery of companies’ climate knowledge, increased public involvement, and collaboration between cities, lawyers, scientists, and activists.”

Mr. Krauss also warns, “The monetary cost of climate change – be it for adaptive actions or failure to adapt, will be enormous, eclipsing the GDP of many developed countries for decades to come. Injury and damage to persons, property, businesses, governments, ecosystems and natural resources, to name but a few, are unfortunately unavoidable at some level.” He further advises, “Given the foregoing, lawsuits against fossil fuel companies and other carbon producers seeking to hold them responsible for the effects of climate change will continue to grow. Similarly, suits by stakeholders against public companies and their directors & officers will likely proliferate. Coverage actions and decisional law relating to insurance for climate change liability are virtually non-existent, but that will likely change soon, given the rising prominence of the issue ...”

These assessments and reports show a remarkable consistency when Climate Change risks are quantified in the financial lens. Another conclusion as well may recognize its one thing to debate what is or what is not and is not Climate Change and what the cause might be. However, it’s another thing altogether when the firms that supply the funding for the development of property major start sounding warning bells. Or when the insurers and re-insurers who pay for the financial damages resulting from climate risks begin indicating they are now seriously rethinking what industries they will or will not insure. With the investment bank warnings and insurance trends, all compounded in price pain given all legal costs which will go with it.

Time is running out to pick and choose between different solutions