Keystone XL, One Head of the Hydra

In ancient Greek mythology, the Hydra was a deadly monster that had many heads.  If one was cut off two grew in its place.

Killing Keystone XL won’t stop Canada from developing its tar sand deposit.  Even if no new pipeline crossing the US border is ever approved, US ability to import as much tar sand oil as Canada can produce will not be affected for a number of years.

And as long as most of the rest of civilization wants to pretend it doesn’t have a climate problem, Canada can find other markets.

New tar sand projects are profitable as long as there is a sustained world oil price greater than $50.  (see:  The Economist) 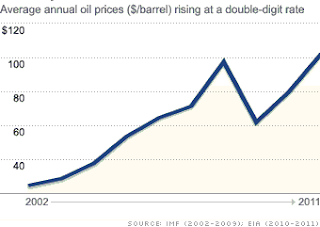 The oil price has been high enough long enough to have caused dramatic expansion of production in Canada, and a corrresponding expansion of the pipelines that are necessary to transport the oil to US markets.

The pipeline business is structured so that producers can back out of commitments to use projects that are delayed for any reason, which allows new projects to be quickly put together.

The idea that Keystone XL represented something new, i.e. the first big US tap into Canada’s tar sand deposit, is not correct.

The Keystone project is already partially complete.  The 30 inch Keystone Phase 1 pipeline got its Presidential permit to cross the US border with tar sand oil in 2008.  It became operational in mid 2010.  The shorter 36 inch Keystone Phase 2 from Steele City to Cushing was in operation by February 2011.  Here’s what these two pipelines look like on a map: 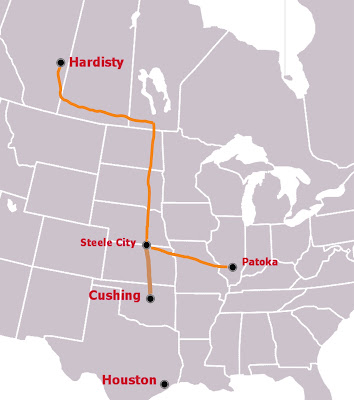 A competing project, the Alberta Clipper, got its Presidential permit in 2009.  It started moving oil in 2010.  It is the same diameter as Keystone XL was supposed to be, i.e. 36 inches.  Adding the Clipper to the map looks like this: 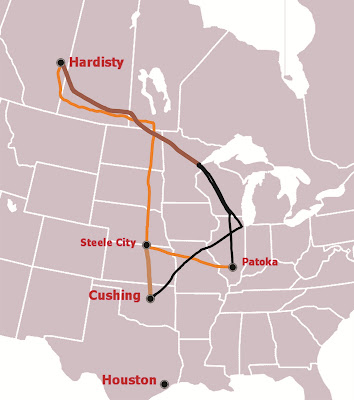 The Clipper is the dark brown line extending from Hardisty Alberta to the tip of Lake Superior, where it connects with the existing Enbridge pipeline system shown in black.

Keystone Phase 3 and 4, generally known as the Keystone XL, the dotted red lines on the map below, are the parts of the Keystone project that were just delayed by Obama.  They would have added to this picture in this way: 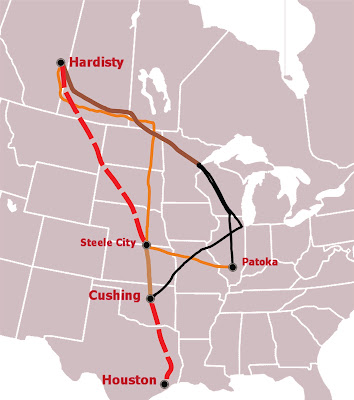 The more immediately important part of Keystone XL was the Phase 3.  This was supposed to be a 36 inch diameter section from Cushing to Houston.  The startling recent increase in US oil production and expanded tar sand activity has exceeded the existing capacity to move oil from Cushing to Houston.  This meant tar sand oil producers received a significantly lower price for their products.

People were calling the Keystone XL the “bullet line” because of its direct route from the source of the oil to the refiners who want it in South Texas.  Anyone might think if this line was killed, it would have to have a negative effect on producers of tar sand oil.

But this recent discovery by planet huggers that Obama can be pressured over permits to cross the border if an election campaign is looming can be circumvented.

Only the northern section of Keystone XL needs the Presidential permit because it crosses an international border.  The lines that are crossing already can have pumping stations added so they can handle more oil.  New capacity can be built from Cushing to Houston without such a permit.

The proposed Cushing to Houston part of Keystone XL, a 36 inch line with enough pumps to move 1.3 million bpd initially was big enough and thought to be so certain to be completed that competing proposals and ideas were further back on the drawing boards.  The Keystone XL delay caused immediate action:  after briefly considering increasing the capacity of a competing Cushing to Houston proposal, i.e. the Wrangler, and rushing it to completion, its owners bought an empty existing pipeline, the Seaway, which was originally built to carry crude from the Gulf up to Cushing, and announced plans to reverse its flow and boost its capacity to 500,000 bpd.

Remove Keystone XL, increase the capacity of The Clipper and the original Keystone by installing more pumping stations, reverse and beef up the capacity of the Seaway pipeline, parallelling it as the Cushing to Houston demand warrants, and you have a map that looks like this: 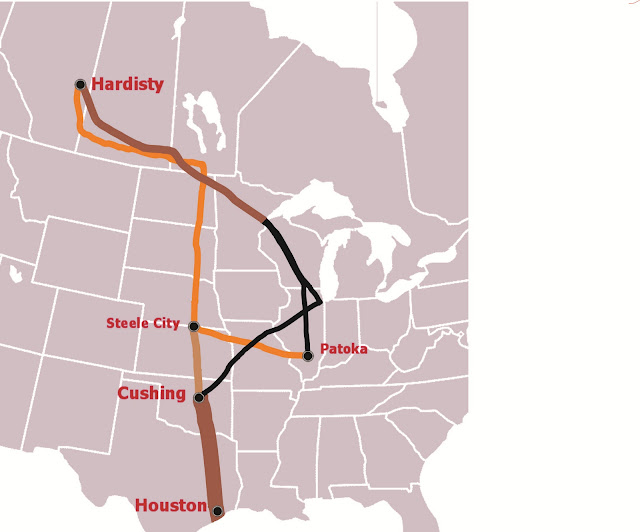 Keystone XL’s owner, TransCanada, is saying they are going to talk to the State Department about separating the Cushing to Houston part of Keystone XL out from their overall proposal so they could build that section starting in a few months, in spite of Obama’s refusal to grant the entire project a permit and even as they modify their northern route and reapply for approval.

And there is this: rail transport jury rigged to get oil out of the Bakken in North Dakota has proven its ability to move 700,000 bpd south.  The Canadian Pacific Railway company has already started moving some tar sand oil out of Canada towards the refineries on the Gulf.  A report out of Calgary suggests 2,000,000 bpd can be moved across the border on rails and barges.

This kind of response makes the Keystone XL delay look like a problem only for its owner rather than for the industry or for Canada.

For the longer term, there is some talk in Canada about finally opening up a new market for Canada’s tar sand oil now that there is some slight question as to whether the US wants it.

Canada’s Natural Resources Minister Joe Oliver recently said this: “China has emerged as the largest consumer of energy in the world, so it is utterly obvious what we must do”.  Jim Flaherty, Canada’s Minister of Finance, said:  “It may mean that we may have to move quickly to ensure that we can export our oil to Asia through British Columbia”:

Two projects aimed at opening up Canada’s tar sand reserves to the Chinese are already under consideration: 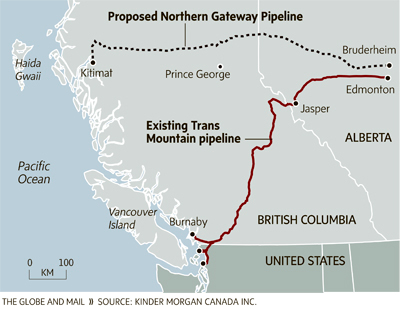 The Northern Gateway pipeline would be the same diameter as the Alberta Clipper and the Keystone XL – 36 inches.  This could eventually move more than 1,000,000 bpd out to Kitimat on Canada’s West Coast where China could access it.

Kinder Morgan Canada is in the process of upgrading its existing 24 inch TransMountain pipeline to 36 inches as well.  There’s another 1 million bpd.  The existing pipeline is already sending some oil to Asia and California.

Both of these projects have problems Canadians would rather not deal with.  The biggest supertankers can’t get into the Burnaby terminal for TransMountain, and the Northern Gateway faces an approval process British Columbia’s disgruntled Natives appear eager to exploit.   Native opposition stopped Canada from building a pipeline to move gas from the Beaufort Sea to markets in the south in the 1970s and everyone remembers.  But if the prospects in the US market are taken to be of limited or declining size, Canada, especially the climate science denying government now in power, can get one or both of these lines done.

Heracles initially attacked the Hydra of myth by cutting its heads but reconsidered once he saw two grew back in place of each one.

Keystone, The Alberta Clipper, Keystone XL, and the Cushing to Houston pipelines are drawn on a blank map obtained from Wikipedia Commons.

The tar sands project picture was taken from The Ecologist website

The map showing the Northern Gateway project is taken from the Toronto Globe and Mail newspaper.