As the costs of battery storage continue to decline, its benefits are increasing in understanding. Yet there remains a level of uncertainty among end-users and financiers regarding how well a given battery system will perform.

With more systems being deployed worldwide, buyers and investors, in particular, want to know the details of the system’s battery performance. How long will the batteries last? How much power will they deliver? How do we know the varying states charging and discharging of the batteries? How quickly can they be recharged and what will all of it cost? Additional considerations come into play when these systems are part of a PV solar system along with a battery storage system.

A battery storage system is comprised of bi-directional inverters, battery banks, software controls and balance of the system. Within each system, it’s the batteries in terms of operating performance which are the most important components. Given their key role, it’s in the buyer’s best interest to know how battery banks are constructed and the basic operating principles which govern battery life.

Understanding how lithium-ion battery banks are designed and constructed

The operating capacity for a lithium-ion battery storage system is determined, among other factors, by the type of lithium-ion chemistry being used combined with the number of battery cells in the total battery bank. While a system may look like one big battery, it’s actually comprised of a number of battery modules which in turn are made up of individual battery cells.

Tesla along with Panasonic, for example, has taken the approach of using cylindrical battery cells in Tesla’s electric vehicle and battery storage businesses. These cells all undergo similar testing and manufacturing processes going from individual cells into battery modules then a pack sub-assembly into a final pack assembly and combined with battery management controls added as shown in this process flow: 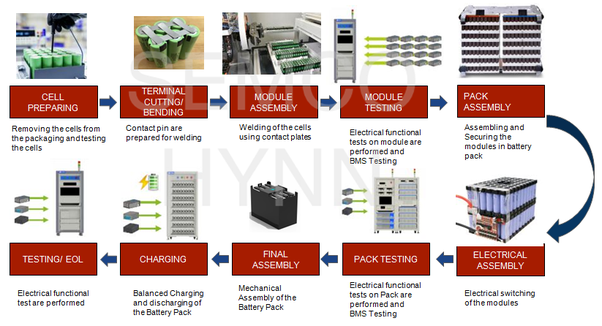 How these battery principles work together

To better understand how to determine battery life, it’s helpful to start by looking at the industry favored term, battery cycles. This measurement refers to the number of times the battery can be charged and discharged over its lifetime. Battery cycles are the specification term used by a majority of battery and battery storage manufacturers.

For the average lithium-ion battery, it will have a cycle life of between 3000-6000 cycles, which means the more cycles the battery can do, the longer its lifetime ability to hold a charge. With this, the battery management system will show a current state of charge to a known state of charge range. But things get more complicated with just using cycle life given they do not reflect the batteries ability to hold a charge over time from use, also known as battery degradation.

According to Dr. Frank OYoung, AVP, Battery Storage Darfon America Corp. of Mountain View, CA, “Yes, we see energy throughput as the most accurate way to estimate battery capacity and we use this in our calculations. We also see this with Tesla and Panasonic as well. However, the depth of discharge incurred in each battery cycle is also a key indicator of lifetime performance as well.”

Dr. OYoung of Darfon also stated a good battery management system (BMS) can record both the cycles of the battery bank and the energy throughput as in counting the kWh used from the battery bank while the counting of the depth of discharge of history is somewhat more complicated. 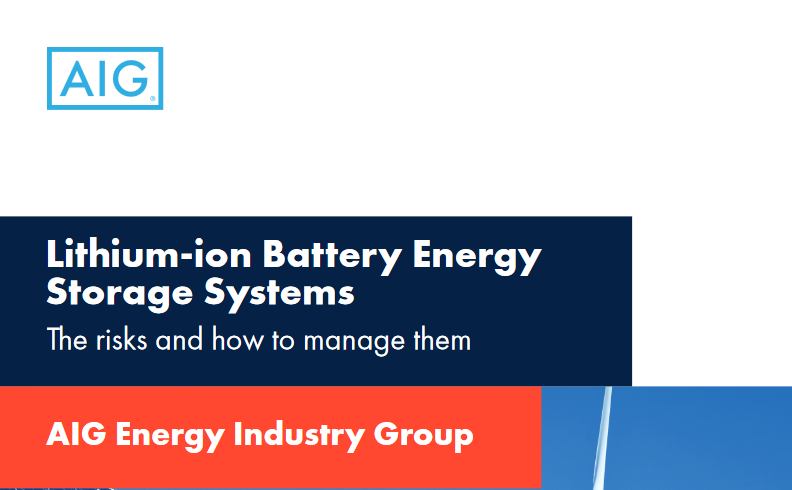 Significant industry and third-party certification along with the National Electrical Code, major insurers and major fire departments such as the Fire Department of the City of New York, the California Energy Commission and the New York State Energy Development Authority all spend time and effort in understanding, minimizing and planning for the large scale lithium-ion battery storage projects. A number of risks associated with the use of lithium-ion are now well known such as:

Heat can create a thermal runaway

This refers to a condition that can occur inside of a lithium-ion battery in which heat begins to turn into excessive heat at a level which the lithium-ion battery chemistry is not designed to handle.  It’s caused by a battery module that may have a defective battery cell or physical damage to the battery modules and cells or from voltage overcharging. It’s infrequent but it can lead to serious fire safety risks and this is not an ignored risk within the industry. 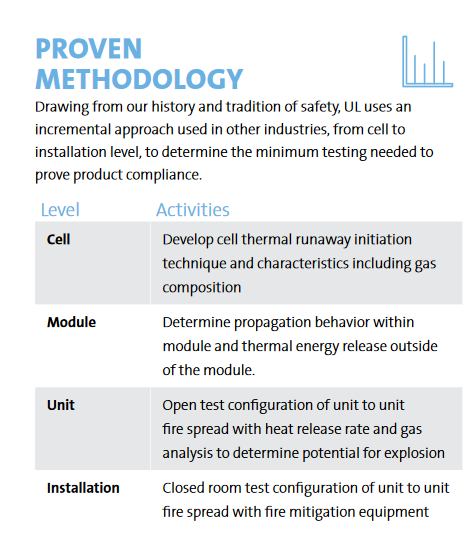 Another issue can be the failure of protection and control systems. For example, a Battery Management System (BMS) failure can lead to overcharging and an inability to monitor the operating environment, such as temperature or cell voltage.

To minimize this it’s critical the battery storage inverter firmware’s is opened and the correct lithium-ion battery performance values are inputted into the inverter’s registry along with an operating BMS within the battery bank. Additionally, remote monitoring and control of the system through the use of Battery Energy Storage System (BESS) operating software be operational at the time of system commissioning.

The sensitivity of batteries to mechanical damage, lightning strikes, and ground faults

Unlike conventional lead-acid batteries, lithium-ion batteries regardless of the type of battery chemistry used can be very sensitive to mechanical damage and electrical surges which have the possibility to result in battery short circuits. Well designed grounding and more advanced automatic lighting and ground fault protection systems should be considered.