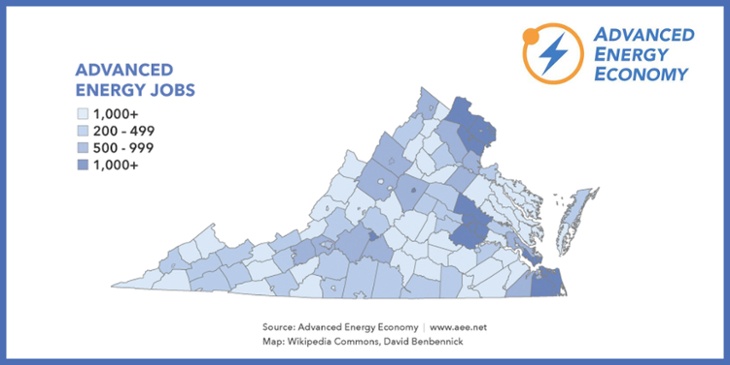 Last month, elected leaders in the Old Dominion crowed as CNBC crowned Virginia “The Best State for Business” in the United States. Here is what you might not know. Not only is Virginia a good place for business in general, it is a good place for advanced energy businesses – and workers – in particular. As shown by AEE’s new Virginia employment fact sheet, more than 100,000 people in the Commonwealth are employed in the industry. That is more people than are employed in every hospital across the Commonwealth, and over twice as many as work in Virginia’s real estate sector. And advanced energy employers say there are lots more Virginia jobs on the way this year.

Companies doing business in advanced energy employ people with a range of skill sets and educational backgrounds in fields as diverse as energy efficiency, wind and solar generation, electric vehicles, and battery storage. Of the 101,400 Virginians employed in advanced energy, 78,000 work making our homes, offices, and factories more efficient, saving energy and money.

What is particular exciting, though, is the pace at which Virginia’s advanced energy industry is growing. Last year, employment in the sector expanded by 4% – three times the clip of jobs in the Commonwealth as a whole. Given how robust Virginia’s economy is at the moment – lest you forget, it is “The Best State for Business” – that’s no mean feat. On top of that, employers say they expect to add advanced energy jobs at nearly twice that rate – 7% - this year.

In part, Virginia’s advanced energy industry is growing because of actions taken by the Northam Administration. Last year, the Administration announced it would use $14 million from the VW “dieselgate” settlement to help develop a network of high-speed EV chargers across the Commonwealth, making Virginia one of the first states in the nation to do so. In recent months, the Governor’s Administration followed that up with investments to electrify municipal bus fleets, again using VW settlement funds.

But it is also due to smart policies enacted by lawmakers in recent years. The Grid Transformation & Security Act (GTSA), passed last year, has prompted a significant investment in advanced energy. For instance, the law has led to a dramatic expansion of energy efficiency in Virginia, helped facilitate approval of Dominion’s offshore wind pilot project – the first in the Mid-Atlantic – and is creating new opportunities for large-scale solar and battery storage projects.

At the same time, some outdated and arbitrary policies are holding back Virginia’s advanced energy industry. Local companies, like Sigora Solar, are feeling the effect.

“We’re hiring as fast as possible to keep up with our exponential growth. In the past year, Sigora expanded operations to 10 new states, most of which have made long-term commitments to grow solar,” said Logan Landry, Sigora’s CEO. “As a Virginia-based company, we would prefer to hire more Virginians. Sadly, absent the General Assembly prioritizing programs to grow our advanced energy economy and reforming significant policy barriers — like the cap on PPA projects and rooftop solar — Sigora will have to continue to look elsewhere to grow and hire skilled staff.”

Virginia’s failure to meet its full potential isn’t limited to the solar sector. The Commonwealth is still far from meeting its full potential when it comes to saving money – and that’s costing taxpayers money, as Larry Cummings, Marketing Leader of Strategic Partnerships at TRANE points out.

“There are untapped opportunities that could create even more jobs for advanced energy companies like ours, like deferred maintenance projects at our public colleges and universities,” notes Cummings. “These self-funded projects, which tally into the hundreds of millions of dollars, would create jobs while saving students and taxpayers money. We need public policies to prompt more smart energy investments like that."

When it comes to advanced energy business, the Old Dominion has a great story to tell. AEE’s latest jobs numbers illustrate that. But there is far more the Commonwealth can do, to grow jobs, generate prosperity, and create a clean, reliable, affordable advanced energy future. You can count on Virginia AEE to be working on that.