Comments on the Seeking Consensus process

Most data presented here come only from my estimates presented below the articles focussed on different energy options. However, the Seeking Consensus process enjoyed good readership and almost all internalized cost estimates got 50 or more likes. This can be attributed to the good quality and relatively low degree of variation in publically available internalized cost data of various energy options. When we move on to externalized costs in the next chapter of the Seeking Consensus project, I expect more widely spread responses resulting from much greater uncertainty in the data.

The average global internalized costs of new builds of different electricity options are presented in the graph below. Different estimates emerged for nuclear where the range of estimates is indicated by error bars. 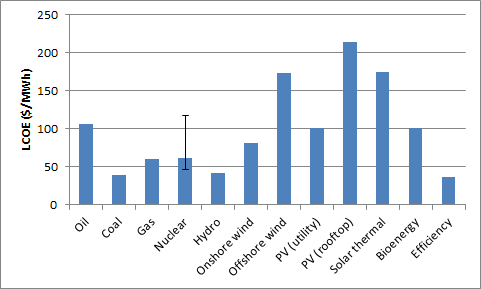 It is clear that conventional technologies (coal, gas, nuclear and hydro) remain the most economical options on a global basis. Onshore wind, utility-scale PV and bioenergy have also reached price levels allowing significant deployment in certain favourable locations. Energy efficiency emerged as the cheapest option of all.

The average global internalized costs of using different energy options for industrial/residential heat are shown below. 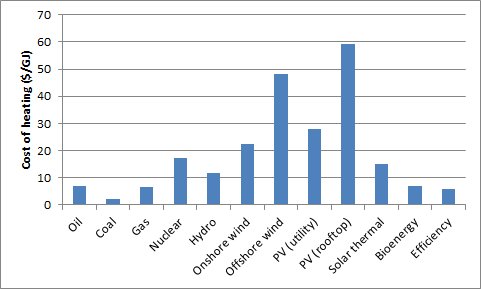 The intuitive conclusion that combustible fuels (fossil fuels and bioenergy) are far more economic for heat production than electricity is confirmed in the data presented above. Solar thermal heat also proved to be comparatively affordable relative to solar thermal electricity. Efficiency once again proved to be an attractive option.

The average global internalized costs of different transportation energy options are shown below. 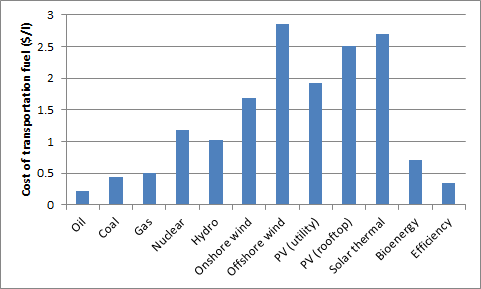 As shown above, oil is still by far the most economical fuel for transportation purposes. Efficiency takes second place with other fossil fuels and biofuels also proving reasonably affordable. Note that transportation fuel costs for most electricity producing technologies were calculated according to optimistic future synfuel costs. EVs were considered in the calculation of transportation cost using rooftop PV electricity where most of the equivalent fuel costs resulted from the higher capital costs and depreciation of EVs.

The neglected energy option of conservation

Energy conservation (here defined as reductions in energy consumption achieved through behavioural choices which have a negligible or positive effect on the number of happy life years achieved) emerged as the most economical energy option by the proverbial country mile. The graphs below show that intelligent energy conservation can result in savings which are as large as the costs of the most expensive energy production technologies. 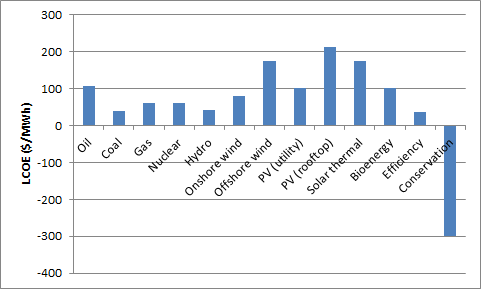 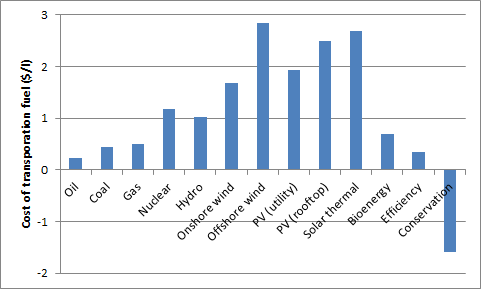 It is clear that electricity is the sector with the greatest number of economically viable energy options. Given increasing environmental concerns, it is not surprising that the projected mix of new energy capacity installations is quite diverse. Global capacity factor weighted capacity additions in the period 2014-2025 in the latest IEA New Policies scenario are shown below. Capacity factor assumptions are as follows: Coal – 65%, Gas – 50%, Nuclear – 85%, Hydro – 40%, Wind – 25%, Solar – 15%, and bio – 70%. 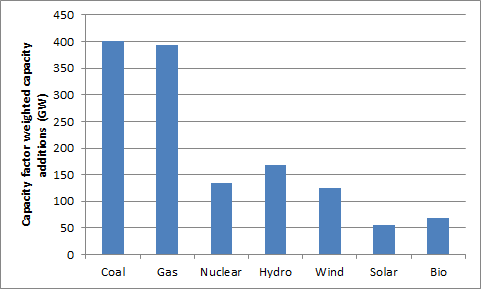 The capacity addition numbers presented above reflect the internalized cost numbers presented in the first figure in this article fairly closely. If internalized costs were the only important factor, however, cheap coal and hydropower should see more deployment, but pollution concerns surrounding coal and physical limitations related to hydro impose important restrictions. Political headwinds faced by nuclear also moderate projections for this technology.

As the internalized cost numbers above suggest, diversification will be much more challenging for heat and transportation applications. As shown in the diagram below (large interactive version available here), electricity makes up only a small part of final energy consumption, implying that this is a very important challenge.

For heat purposes, information from the IEA Energy Technology Perspectives report suggests that CCS and efficiency are the primary mitigation options for the most important industrial processes such as iron & steel and cement shown below. This implies that the energy mix for these applications will see little change over coming decades as also suggested by the internalized cost numbers presented in the second graph in this article.

For transportation, efficiency is also the most important carbon reduction mechanism with alternative fuels becoming more important in later decades.

As the third figure in this article suggests, much of the alternative fuel wedge is likely to come from advanced biofuels (below). Although the internalized costs associated with biofuels are much higher than with oil, costs will still be affordable as many developed nations charge 5 or even 10 times the actual internalized fuel costs for gasoline due to taxation and the global nature of the oil market (price set by most expensive production). 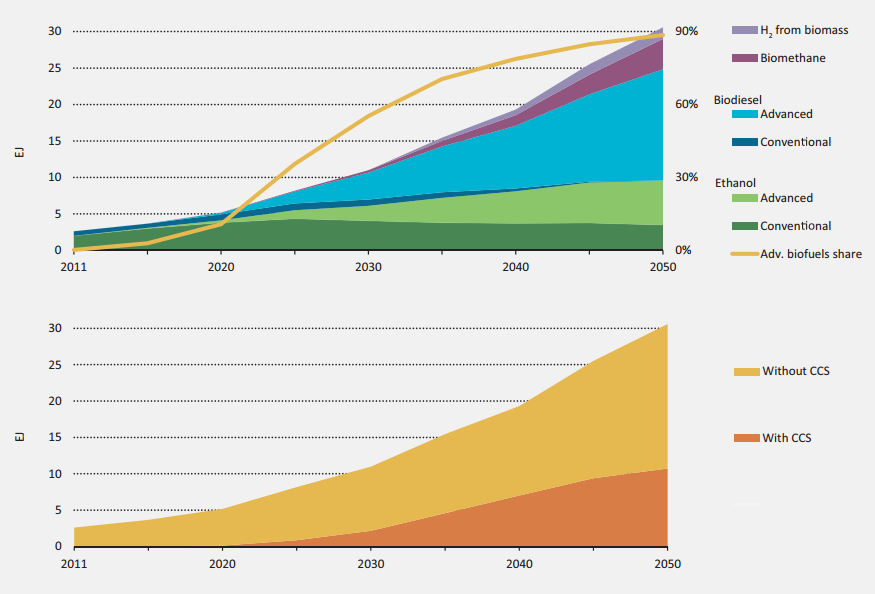 Conservation does not get much mention in official energy scenarios. The “Avoid” and “Shift” wedges in the transport carbon avoidance graph present one of the few examples that can be found. The resistance to adopting conservation measures despite the large potential savings indicated in this article is a good example of why sufficiently fast decarbonization will be very challenging over the 21st century.

I only looked at the effective cost of transportation fuel coming from different energy options. Each of the articles linked at the top of this article has a section on energy for transportation. All options are based on liquid hydrocarbons (produced through oil refining, Fischer Tropsch, fermentation or electrolysis) to get a common ground for comparison except for the case of distributed PV where I did an estimation for EVs.