Infrastructure Negotiations and the Fate of National Climate Policy— Will There Be a Chance to Make a Second Impression?

Gina, Gina, Gina…didn’t your mother ever tell you that you never get a second chance to make a first impression? Certainly, mine told me, and I’d venture most have been offered such pearls—or something like them—at one time or another.

I’m confident my mother heard the phrase in an ad for a brand of men’s suits. The first of many times she told it to me was just before a meeting with my college’s scholarship committee, when she advised I shave my beard, cut my hair, and put on a suit. But I digress.

The Gina of whom I speak is Gina McCarthy. Ms. McCarthy serves in the White House as President Biden’s climate czar; it’ a role for which she is more than qualified, having served in the Obama administration as EPA’s administrator and during the Trump administration as president and CEO of the Natural Resources Defense Council.

McCarthy gave voice during a Politico interview to what many in the climate community have thought but rarely spoke of publicly—that President Biden would accept gutting a central climate provision of the infrastructure bill as part of a bipartisan deal.

In her own words:

While every piece like a clean electricity standard may not end [up] in the final version, we know that it is necessary, we know that the utilities want it, we are going to fight like crazy to make sure that it’s in there. And then we’re going to be open to a range of other investment strategies. (Emphasis added)

The timing of this statement was awful.

The day before McCarthy’s Politico interview, President Biden ended his negotiations with Senator Shelley Moore Capito (R-WV). He told the senator that he appreciated her efforts to put together an infrastructure bill that he and Senate Republicans could support, but that he would now try his luck with a bipartisan group of senators that included Sinema (D-AZ), Manchin (DWV), Romney (R-UT), Cassidy (R-LA), and Portman (R-OH).

The group comprised of the Senate’s leading moderates was still working on their version of an infrastructure bill. It was hardly the time for McCarthy to have suggested that the White House might be willing to sign off on legislation that failed to include a national clean electric standard (CES).

A clean electric standard would require an amount of generation from clean energy sources like solar and wind. It is similar to the renewable portfolio standards (RFP) with which most states are familiar. (See Figure 1)

The significance of a CES is hard to overstate. The nation lacks an integrated energy and environment plan with clear measurable goals and objectives.

US climate policy is akin to putting a jigsaw puzzle together without a picture on the front of the box, letting you know what it is supposed to look like when finished.

A national clean electric standard would be the keystone of a national climate policy that has a chance to meet President Biden’s goals of a decarbonized power sector by 2035 and net-zero emissions economy-wide by no later than 2050. 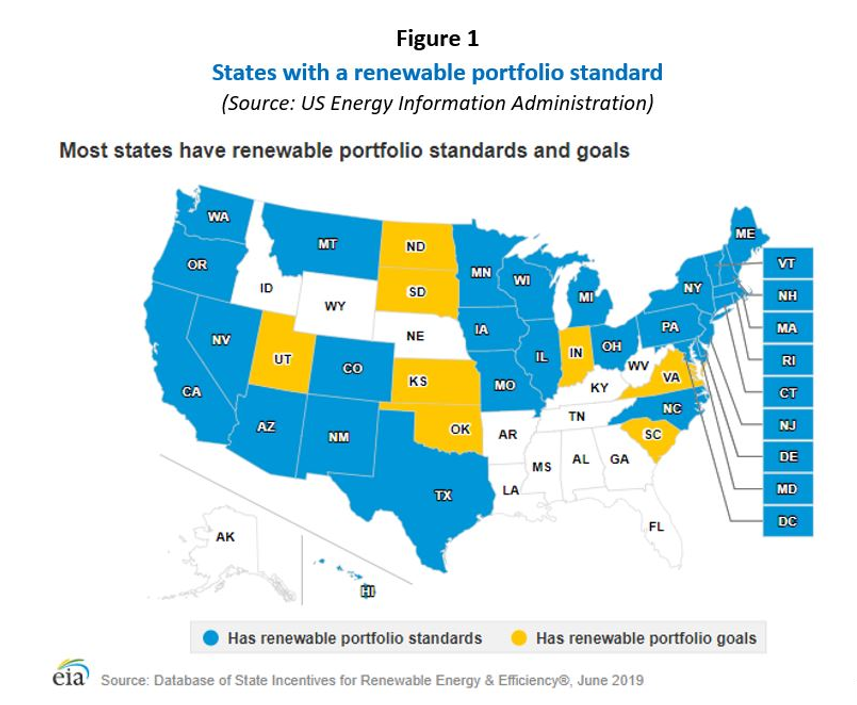 Moreover, federal legislation establishing the CES could also include a clear statement that the EPA has the authority to regulate carbon and other greenhouse gas emissions along with other clarifications, e.g., who has standing to sue, that could reduce the number of lawsuits against the federal government that take years to be decided.

McCarthy’s statement couldn’t have come at a worse time. Whether her words were meant to suggest the White House would be willing to sign an infrastructure bill without the CES provision or not—it’s how it’s being interpreted by conservatives, moderates, and progressives.

At this point, it’s not at all clear whether a significant number of Republican senators would be willing to vote favorably on an infrastructure bill along the lines the bipartisan group is discussing. The whispers are they will propose a bill of around $1 trillion with over $500 billion of new monies—but with no tax implications.

Although Senate Minority Leader McConnell had indicated he could muster the ten Republicans needed to join the 50 Democrats to pass the Moore Capito infrastructure bill, he’s not made the same commitment to the bipartisan group.

In any event he can be counted on to keep squeezing the White House for his own purposes that have more to do with blocking the entirety of Biden’s legislative agenda—whether climate-related or not—in advance of the 2022 midterm elections. It’s an objective shared by House Minority Leader Kevin McCarthy.

Gina McCarthy’s statement has ignited the concerns of progressives in both the Senate and the House. They were already nervous that Biden might cave too early because of his commitment to bipartisanship. Following McCarthy's interview Senator Sheldon Whitehouse, a staunch supporter of climate protection and a longtime friend of the president, tweeted:

Climate has fallen out of the infrastructure discussion as it took its bipartisanship detour. It may not return. So, then what? I don’t see the preparatory work for a close Senate climate vote taking place in the administration.

Whitehouse is not the only senator concerned about Ms. McCarthy’s recent statement. Senators Markey (D-MA) and Heinrich (D-NM) have said no climate, no deal on infrastructure legislation. Words being echoed on the House side by Representative Ocasio-Cortez and other progressives in and out of Congress.

There are times for a politician to be publicly honest and times not to be. This was clearly the time not to be. Ms. McCarthy’s experience as an accomplished policymaker and politician makes her statement all the more extraordinary and concerning.

The real problem, however, is not what the White House climate czar said in an off moment in an interview. The problem goes much, much deeper and is emblematic of what ails American politics today.

The thornier climate provisions would then continue to be worked on and made the subject of separate legislation with the agreement of both parties that it would be brought to the floor of the Senate and House for a vote. It’s a scenario Senator Carper, another moderate longtime friend of President Biden, has suggested.

Why such an agreement cannot be reached is the enmity and mistrust that Republicans and Democrats feel for each other. These days there is no first or second chance to pass stand-alone legislation.

Until trust and civility are restored, governing the nation will continue to be beyond anyone’s grasp. Talk about an unsustainable environment.