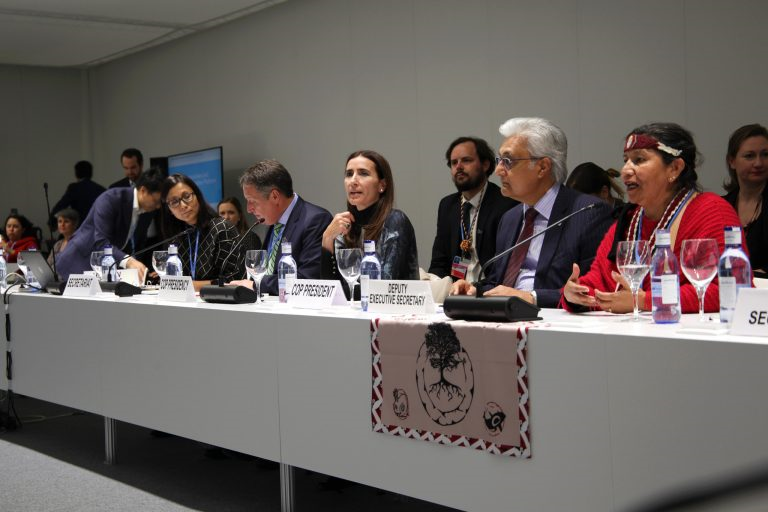 The negative impacts of COVID-19 span beyond direct health effects, particularly among Indigenous Peoples—who have been among the most drastically impacted by the pandemic. Human rights violations have skyrocketed and environmental conflicts have intensified, forcing Indigenous communities to grapple with these circumstances and what they mean for their ability to continue participating in political processes integral to advocacy for their rights and equality.

COVID-19 has prevented Indigenous Peoples from participating in person at the international climate change negotiations convened by the United Nations Framework Convention on Climate Change (UNFCCC), as these have been postponed or moved online. The presence of Indigenous Peoples at these negotiations ensure that human rights are central to all discussions, and also help reduce the possible negative environmental and social impacts of new international policies. Their perspectives are key to painting an accurate picture of what is happening on the ground in their territories, and how climate change is already having a significant impact on their way of life.

During COP24, parties to the UNFCCC agreed to launch a Facilitative Working Group (FWG) to the LCIPP—a key decision in the operationalization of the LCIPP—which is composed of seven party representatives and seven Indigenous representatives. The FWG, which will be open to having local community representatives once a constituency is established under the UNFCCC, is tasked with determining the best ways to facilitate successful knowledge exchange among and by Indigenous Peoples. Knowledge holders of the Indigenous Peoples, for example, have to identify what kind of knowledge they want to share about climate change adaptation and mitigation. Additionally, in the context of transfer of technologies, Indigenous Peoples need to determine what kind of information they need to support their communities against the impacts of climate change. For example, in determining how to deal with flooding, Indigenous Peoples might benefit from knowledge exchange of different measures and tactics for flooding management from different parts of the world.

This week, the LCIPP FWG is going to convene FWG 3, its first official virtual meeting of the year 2020. As with all other UNFCCC in-person events in 2020, this meeting will also take place virtually due to the impacts of COVID-19. While more convenient on one hand, this modified meeting format will present quite a few challenges for the effective participation of Indigenous Peoples.

Ahead of the upcoming LCIPP FWG meeting, Mr. Estebancio Castro Díaz , Representative for the UN Indigenous Sociocultural Region: Central and South America and the Caribbean to the UNFCCC LCIPP, provided insight on the challenges that Indigenous Peoples are facing with regards to participating in international climate change policy discussions, and his expectations for the virtual LCIPP FWG meeting this week.

Estebancio Castro, Representative for the UN Indigenous Sociocultural Region: Central and South America and the Caribbean to the UNFCCC LCIPP. Photo by Bärbel Henneberger.

COVID-19 and Indigenous Participation:
This year, the LCIPP FWG meeting was supposed to take place in May 2020 during the COP26 intersessionals. But that meeting, along with the first regional meeting of Indigenous knowledge holders, was postponed due to the COVID-19 pandemic.

Now that most international climate events are hosted online, not having reliable internet access, in addition to simply not being used to participating in virtual events, is preventing Castro and other Indigenous Peoples from full and effective participation in important processes throughout the year. In Castro’s case, the lack of internet connectivity in his community in the Kuna Territories on the coast of Panama, especially during the rainy season, has been a significant issue.

Furthermore, exclusively virtual meetings do not accommodate the different styles of advocacy work that Indigenous Peoples engage in. Many Indigenous Peoples, for example, often approach Party members during in-person meetings to engage in conversation and state their positions in order to ensure their inputs are reflected in official UNFCCC documents.

What to expect during the FWG 3 meeting:

Castro expects the focus of FWG 3 to be on the work to revise the official climate change communications of the Parties to UNFCCC. Other topics on the FWG 3 agenda include:

He expects that the first regional meeting of Indigenous knowledge holders, and other relevant activities that will lead to the operationalization of the LCIPP, will be rescheduled for next year. Considering that the COVID-19 situation may not improve anytime soon, Indigenous Peoples will likely continue to face challenges with full and effective participation in international climate policy forums. According to Castro, the virtual meeting set up will make it nearly impossible for the FWG to make decisions due to lack of participation and representation from all of the delegates and Indigenous knowledge holders. As such, we have to think about new ways to make Indigenous participation more effective in light of the circumstances, says Castro.

The FWG 3 will provide an opportunity for participants to discuss potential strategies to improve participation and keep advancing the work of the LCIPP. We will be closely monitoring these discussions.