Having now spent a good seven years intently watching global energy developments, I thought it was about time to put my understanding to the test. And there is no better arena for such a test than long-term energy forecasting.

The only thing I'm certain about with this forecast is that I'll be wrong. The interesting part will be seeing the magnitude and direction of my error over the years and trying to figure out which of my assumptions should carry most of the blame.

Large institutes doing this sort of thing usually emphasize that their projections are not forecasts, but scenario analyses. Well, this one is a forecast. In this first post, I will outline the narrative I think the global energy system will follow together with some headline numbers from the forecast. The following four articles will then dive a little deeper into the development of different technologies up to 2050.

The global conversation about climate change will dominate the energy landscape in coming decades. In my view, there will be a marked global policy shift from technology-forcing to technology-neutrality shortly before 2030.

A combination of two events may well end up triggering this tipping point: the official exhaustion of the 1.5 °C carbon budget and the next serious El Nino event (as shown below, a big one comes around every decade or so). With the momentum building behind climate change awareness, a late 2020's media storm triggered by the demise of the 1.5 °C target and several consecutive new all-time highs in global temperatures may just translate talk into action. 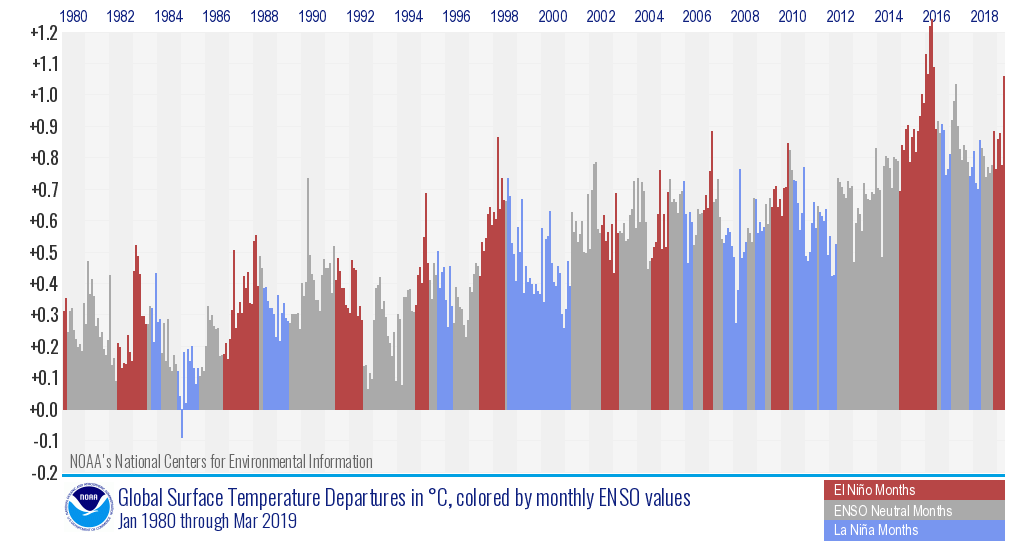 At this point, policies like renewable energy mandates will be replaced by dedicated climate change policies, such as CO2 pricing schemes imposing an emissions cost above $50/ton with a clear upwards trajectory. Developed nations will be forced into the lead by mounting pressure from increasingly powerful developing economies feeling the effects of the vast historical emissions of the rich world.

This global policy shift will not really affect the rapid growth trajectory of wind and solar, which will also benefit from technology-neutral policies. What it will do is to also bring nuclear, biomass, CCS, efficiency and lifestyle change to the party. As a result, I see global CO2 emissions starting a permanent and gradually accelerating decline around 2030.

In the figure below, the solid lines are the projections and the dashed lines the projections without CCS. Clearly, CCS plays an important role in reducing emissions from all fossil fuels as well as biomass, starting in earnest after technology-neutral climate policies are successfully implemented. 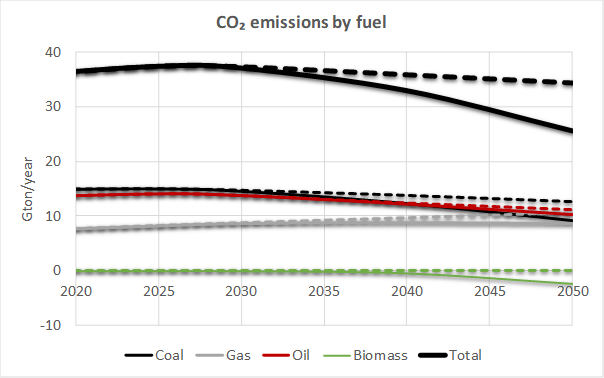 Despite successfully decoupling economic growth from emissions growth, the world will still burn through the 2 °C carbon budget in the 2040s. However, I believe that technological progress will have inspired greater confidence that this damage can be mitigated in the second half of the century.

Overall, I see a world on the right track in 2050. There will be a huge amount of work left to be done, but we will have the tools and the motivation required to do it. Developments in the second half of the century will depend greatly on the latest insights from climate science at that time. Given the large uncertainty in current climate models, forecasting past 2050 is not useful.

Electricity grows strongly in my forecast, more than doubling by 2050. Clean energy will be responsible for all this growth, led by wind and solar power. I see solar surpassing wind around 2030 as cost declines continue and centers of global economic growth gradually shift to sunnier countries. Nuclear also starts growing noticeably beyond 2030 after technology-neutral policies are implemented.

Together, wind and solar grow massively to supply more than a third of global electricity by 2050. However, in line with the standard S-curve for technology deployment, wind growth starts decelerating around 2030 and solar around 2040. During this time, the capacity installed over the past decade will reach retirement age, various integration challenges will increasingly constrain future expansion rates, and sites with good resource quality and public acceptance will be harder to find. 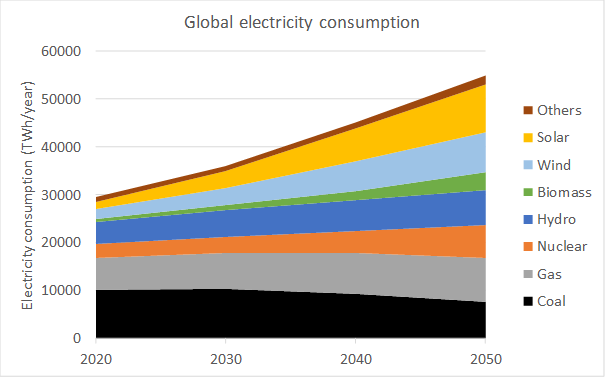 Primary energy growth will be much more modest, increasing less than 30% to 2050. Steady electrification, efficiency gains and lifestyle changes will all contribute to reduced primary energy consumption. Oil demand will be hit particularly hard by the intelligent lifestyle design trends outlined earlier.

Gas will do well thanks to its lower emissions, clean combustion and versatility. Coal will prove difficult to remove from the global energy system as industrial demand in growing regions with limited gas reserves remains robust. Overall, I see fossil fuels still supplying 59% of global primary energy by mid-century. 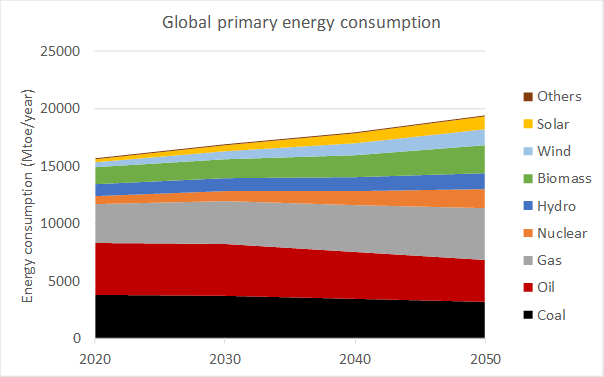 The following four articles will delve a little deeper into various energy sources. Each article will feature comparisons to the three different scenarios in the IEA World Energy Outlook 2018. In addition, there will be some interesting insights derived from a simple power system model that optimizes investment and hourly dispatch of 13 different technologies.

We'll start with the rising stars; wind and solar, looking at my forecasts for capacity additions, capacity factors and the resulting generation. There will also be some insights about how these variable generators interact with other generators and how they benefit from battery storage and electrolysis.

Next, we'll move on to fossil fuels and why they are so difficult to displace from the energy system, despite increasing climate ambition. Their roles as firm capacity in an evolving electricity system and their continued dominance in other economic sectors will be analyzed in more detail.

The less popular climate change solutions of nuclear, biomass and CCS will be discussed next. Here, the focus will be on understanding why they are important, where they complement wind & solar and where they clash.

We'll end with a look at battery electric vehicles, exploring what might happen in this rapidly growing segment. The focus will be on how much they can contribute to climate change mitigation, particularly with my projections of the declining popularity of cars in cities around the world.

It will certainly be interesting to observe how actual data compares to this forecast over coming years. Where do you think I'll be proven wrong?