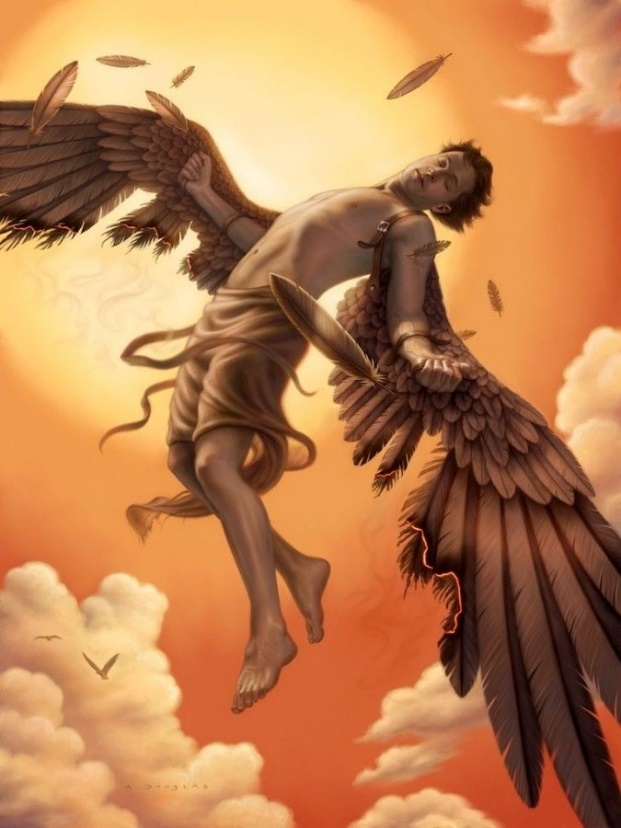 Richard E. Smalley, 1996 Nobel Prize in Chemistry, in a series of lectures given in 2005 shortly before his passing from leukemia, found that the consensus of his audiences was energy is the most critical problem mankind will face this century and that it is the solution to its next nine greatest challenges. “To give all 10 billion people on the planet the level of energy prosperity we in the developed world are used to, a couple of kilowatt-hours per person, we would need to generate 60 terawatts around the planet—the equivalent of 900 million barrels of oil per day”, he said.

Unfortunately, the goal of generating 60 TW of power runs up against the thermodynamic limit identified by Physicist Tom Murphy in his blog post Galactic-Scale Energy, whereby the historical U.S. growth rate of 2.3% for global power since 1650 leads to a requirement for as much power as the sun will be generating in less than 1000 years. 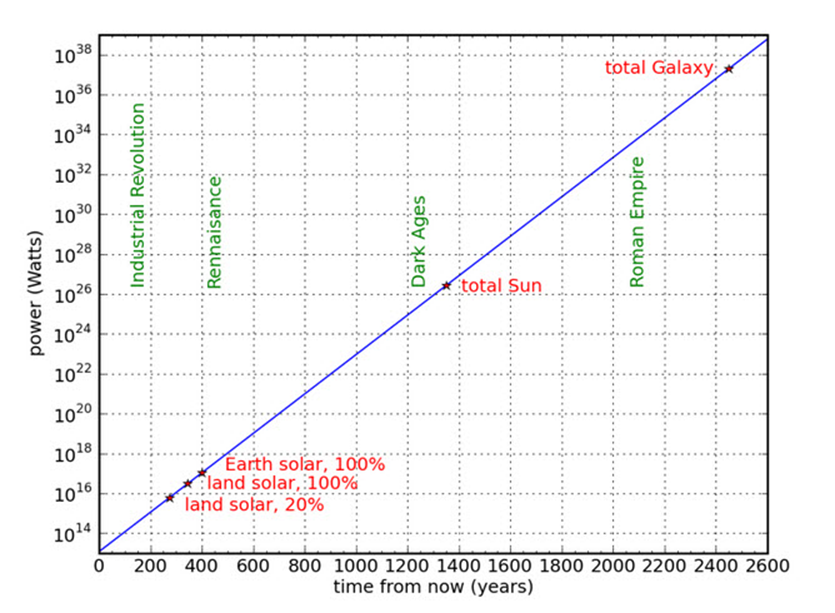 Engineers equate thermal efficiency with capital efficiency, which is why fusion, which requires temperatures of about 100 million degrees Kelvin, is considered energy’s holy grail. But the waste heat of nuclear power and fission, if and when it comes commercially available, is higher than coal or other fossil fuel fired plants.

Waste heat can be used to heat homes and industry during the winter, but summer heat waves in 2003, 2006, 2015, and 2018 forced shutdowns or curtailment of the output of some nuclear plants and the problem of waste heat from fission or fusion, to say nothing of other thermal plants, will grow exponentially and as assuredly as does the COVID virus.

Furthermore, in the U.S. over 40% of all freshwater withdrawals are for thermal power generation and by 2025, two-thirds of the world’s population may face water shortages.

Waste heat from the thermal processes that produce energy, and the low thermodynamic efficiency of these processes is unsustainable.

Icarus defied the laws of both nature and man, including his father, and rose higher and higher to look down, like a god, on those below with fatal consequences. And in many respect we too will be burned producing energy from fission and fusion. And instead, we should be producing our energy as remotely as possible from the Sun that brought about Icarus’ downfall.

In their paper Increasing ocean stratification over the past half-century  two of the planet’s top climate scientists, Michael Mann and Kevin Trenberth point out that increasing ocean stratification inhibits the vertical mixing of heat, carbon, dissolved oxygen, and nutrients. With implications for tropical storm formation and strength, a decline in ocean oxygen concentration, reduced nutrient flux and alteration of marine productivity and biodiversity. All of which are mitigated by reducing ocean stratification by converting a portion of the surface heat to work and relocating the bulk of the heat into deep water from where it returns and can be recycled to produce more work.

The conventional wisdom is the low thermal efficiency of Thermodynamic Geoengineering (TG) and high volumes of seawater that must pass through the large heat exchangers would render the capital cost per MW of power capacity too high for economic feasibility.

A TG system is an arrangement, in order of cost, of a platform and hull, heat exchangers, turbines, electrolyzers (if hydrogen is to be produced), pumps, a heat pipe, and an interface between the platform, the pipe and the condensers and/or the electrolyzers situated in deep water.

The paper Preliminary design of a 100 MW-net ocean thermal energy conversion (OTEC) power plant study case: Mentawai island, Indonesia estimates heat exchangers account for about 21% of the total cost of a system like TG and the next biggest cost is the turbine.

The World Nuclear Association reports that the retrofit of a 1000 MWe Chinese coal plant to air cooling from water cooling  was $200 million.

But the heat exchangers for the TG plant of the same capacity are both evaporators and condensers so the cost of each function would be $170 million each. Cheaper than the Chinese coal fired plant’s cooling system. 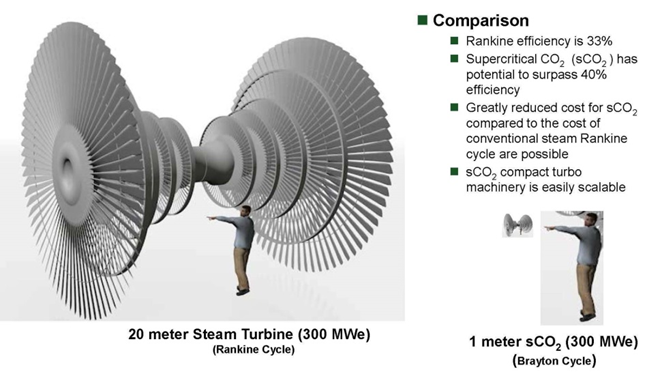 Whose Brayton Cycle’s Economic and environmental benefits they itemize as:

All of which are enhanced and advanced by a TG system using a CO2 working fluid that becomes supercritical at the bottom of a 1000-meter-long column of the gas that gains about 5oC under the influence of gravity. And which is as remote from the wax melting influence of the Sun as is possible and is the best possible use of CO2.

Thirty-one thousand TG platforms flying the Stars and Stripes to produce 12 times the current US  consumption of primary energy while mitigating every consequence of global warming, costing about a fifth the $.10/kWh US citizens for their electricity provide the jobs, taxes and political stability that every politician could ever ask for.

Daedalus challenged human limitations that had so far kept mortals separate from gods, until finally, he broke right through. With fission and fusion, we also are needlessly tempting the gods.

They have provided us with more energy than we can use, are not using the best of it, are instead glutinously consuming fossil fuels and playing with the fire of fission and soon of fusion.

"Waste heat from the thermal processes that produce energy, and the low thermodynamic efficiency of these processes is unsustainable."

Jim, energy striking the Earth from the Sun (~173 petawatts) is more than 10,000 times that consumed by humans. With 99.6% of energy from both sources radiated harmlessly out to space, energy consumed by humans, including all power plants, all transportation, everything, is obviously not the problem. It's completely sustainable, and always has been.

The problem is that .4% of energy from both sources is not being radiated out to space due to increasing quantities of CO2 in the atmosphere. And it's accelerating: from 2005-2019, the Earth's energy imbalance has doubled. Why? With intermittent solar and wind sources of energy unable to meet our needs, we've had to rely on fossil fuel sources to back them up - and fossil fuel sources emit carbon.

The misperception that solar and wind are "renewable" is the problem - they're anything but. 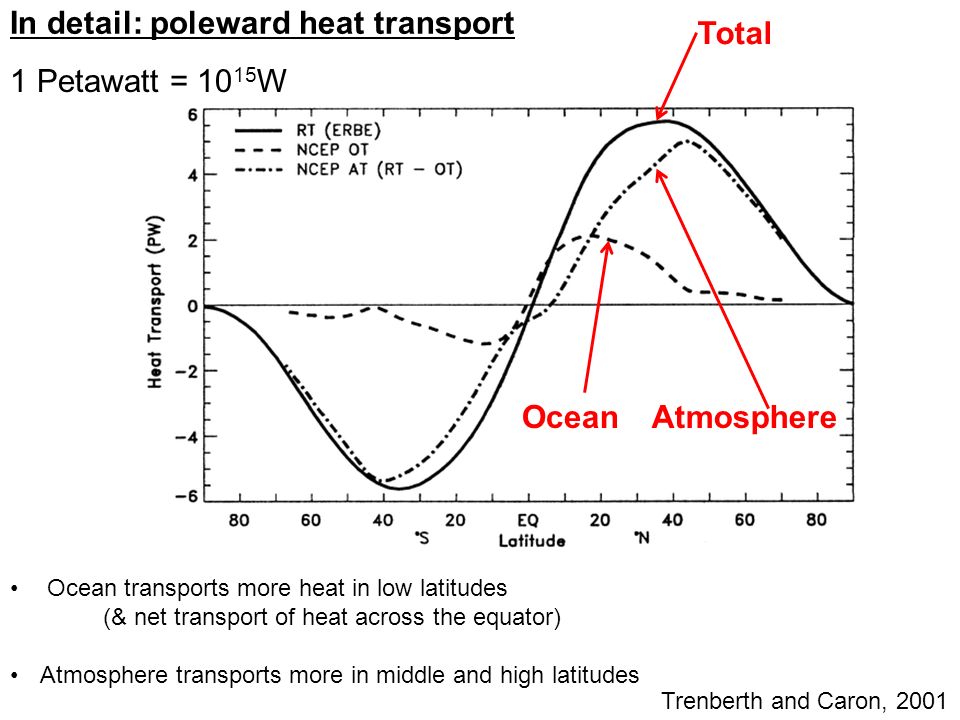 Bob the heat we can influence is the 6 petawatts that is moved from the equator to the poles annually. The 441 TW of global warming heat is a about 7% of this.

Jim, once again: power is a rate. Saying "6 petawatts that is moved from the equator to the poles annually" makes as much sense as sayiing, "The sprinkler system in my front yard consumes 5 gallons per second each hour."

The phrase "6 petawatts" is equivalent to 6 quadrillion joules per second, and your graph describes how fast warm water is shifting northward and southward each year as the Earth revolves around the Sun. Yes, that's a lot of power, but they are big oceans. Does it represent a shift of thousands of kilometers of hot water from the equator, or thousands of meters? The answer would indicate whether it might be possible to harness that power with OTEC or a similar technology. And like windfarms that draw power from the shifting atmosphere, there will be consequences (siphoning off a significant amount of that power would likely shift the Earth's polar axis slightly).

Bob, Trenberth and Caron describe sensible heat transfer through the air and ocean.

Thermodynamic Geoengineering entails heat transfer as the latent heat of the phases of the working fluid.

The only water movement is horizontal through the heat exchangers, and the 1 cm/day diffusion of the water warmed by the transfer of heat into the deep back to the surface.

The thermohaline circulation, the global conveyor built, important to the rate of sea ice formation near the poles, which in turn affects other aspects of the climate system like albedo circulates only 15 Sv.

The consequence of shifting this kind of volume of water is not only the dilution of the surface OTEC resource, but upwelled water also pushes surface heat out of the OTEC zone towards the poles where it is an environmental hazard

Heat shifted beyond the limits of the OTEC zone is no longer capable of producing energy and becomes anergy.

With TG the only vertical transfer of water is the 1 cm/day diffusion of warmed water from 1000 m back to the surface.

Perhaps conventional OTEC would shift the polar axis, TG would not.

"With fission and fusion, we also are needlessly tempting the gods."

That's one of the less common arguments against nuclear power, but probably one of the most honest ones, in terms of reflecting the hidden motivation by anti-nuclear activists.

For decades now, we've known how to power our civilization with clean nuclear energy, but instead continue to pollute the air by burning fossil fuels (killing tens of thousands of Americans each year and changing the climate).  When advocates ask why, we are given answers like it costs too much or takes too long (even though we know for a fact that everything gets cheaper and faster, the more we do it); alternatively we are told that nuclear is unsafe, even though the nuclear accidents of the past have had such low casualty counts that nuclear is proven to be the safest energy source.  Of course, the new excuse is that "renewables can do it better", and we are offered either renewables like sun and wind that are so variable as to increase our dependence on fossil fuel or in Jim's case, a source so remote that it could only ever benefit a few island nations, assuming we could over-come the issue of very large machines that make a small amount of power and are at risk of storm damage and have the potential for large environmental impact.

So we'll go on, wringing our hands and burning fossil fuel.

Obviously the stated reasons are not the real reasons we avoid nuclear.  The real answer is a combinations of "nuclear opponents are being manipulated by the fossil fuel companies" and "nuclear opponents have an irrational emotional hatred of nuclear".

Time to be honest with ourselves about our looming energy risks.

"2.3% is less than we have been expanding since the 1600s. So 2.3% per year from here on out. In 440 years say the surface of the earth is now at the temperature which water boils just because of the waste heat of the energy that we are consuming. Let’s imagine for a moment this low energy nuclear reaction is real or some other fancy thing where we can actually get unlimited energy. In fact, if we just that in a status quo way of expanding on a constant basis we hopefully, we would figure out well before the earth’s surface reached the temperature of boiling water we would say this is a bad idea. We have to change something here. And that within less than a thousand years the earth’s surface would be at the temperature of the sun if we were going to continue that process out."

The heat of warming converts to 31 terawatts of power. Twice the output of fossil fuels which would benefit all nations. Again large machines with lots of power which operate in the doldrums and mitigate every concern of global warming.