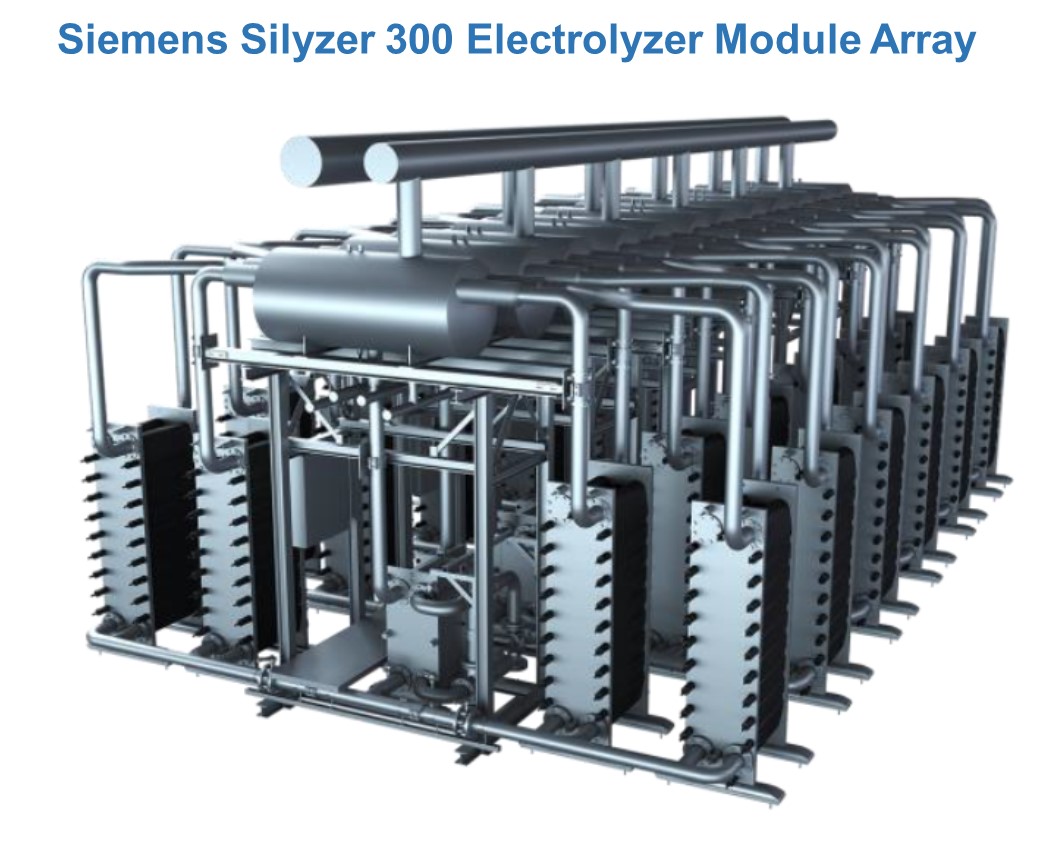 For roughly the last month or so, I’ve danced all around the subject / title of this brief paper with the posts referenced below. However, I’ve seemed to do this without bringing these together, as this post will do.

So what is a hydrogen hub? It is a major user of green hydrogen that will use renewable electricity from the grid to produce adequate supplies of green hydrogen via an electrolyzer and store this hydrogen in high pressure tanks. The storage might have several functions:

It always seems hard to imagine how to get past the chicken/egg scenario of supply/demand for infrastructure and commodities, but hydrogen hubs are a great way to do that. Do you think the greater number of applications will allow them to scale up more quickly than, say, EV infrastructure has done?

I believe Hydrail and backup generation will be among the first applications. These are already starting early deployments, and will spawn larger electrolyzers, which will also drive down the cost of making green hydrogen. Electrolyzer production volumes will increase over time, decreasing their component cost and improving technology.

See my earlier post below. The full story will be in "The Economics of Green Hydrogen," which I will post next month.

Great post for diving into hydrogen hubs and why we might need them.  In your four categories of users, I didn't see any compelling new uses for hydrogen, or the need for a hub, except possibly the use for trains (still a bit skeptical on that one). I've read lots of recent papers on why hydrogen for power generation, either at full content or partial content, is a dumb idea (Mitsubishi notwithstanding). You even mentioned that electric transit buses far outnumber fuel cell buses--there's a reason for that. In your current list of hydrogen users you don't mention refinery (hydrocrackers, hydrogenation) or for fertilizer manufacturing. Refineries are close to my heart since I worked in one as a young chemical engineer many years ago. You don't need a hydrogen hub for either. Short haul heavy duty trucking is going quickly to all-electric. I think long haul will as well, which doesn't leave much for new uses of hydrogen.

The main need for hydrogen is to replace existing technologies that work perfectly well, but also pump huge amounts of greenhouse gas into our atmosphere. Since you live in CA like me, you are aware of some of the major negative effects of climate change.

The next question is, when will green hydrogen be cost effective. I'm writing a post on that subject right now, but it will not post until mid to late May. I've pasted a couple of excerpts from that post below.

The Economics of Green Hydrogen:

Most that have looked at the economics of the title fuel believe that it will play an important role in the transition to a greenhouse gas (GHG) free economy in future years. However the big question is, when?

First of all this answer depends not only on the specific application of the fuel, and the technology to convert the fuel back to energy, but also where it is being evaluated. For instance, in a recent post on clean backup generation, I found a similar application in large, long-range buses (commonly called coaches). I also found an economic evaluation that found fuel-cell-electric buses would be competitive with battery-electric buses as soon as in the mid-2020s. Also, California offers a $240,000 incentive for the purchase of a large fuel-cell electric bus (verses $120,000 for a large battery-electric bus).

Note that the cost of renewable electricity, based on actual power purchase agreements throughout the U.S., is already at or below $20/MWh for large utility-scale PV projects (200 to 400 MW) in the Western U.S...

So the two answers to the original question are; (1) it's complicated, and (2) for some specific applications / locations, now.

David commented on ...
Kamala Harris and Hope for Transmission Development
The "Inflation Reduction Act" (which is really a climate bill) has a mere $760 million in its pot for transmission siting and development grants...
Energy Central Jobs
Featured Jobs
More Jobs