There are currently a lot of debates going on about the potential of hydrogen. The question arises as to what role hydrogen will play in the energy transition. In this article you can find out which political regulations have already been made and which changes are just around the corner.

Here in the second of two articles on hydrogen in the energy system, we also consider the ramp-up of the required electrolysers. In addition, we examine the current regulatory developments. You can find the first article on the German hydrogen strategy here .

In July 2020, the European Commission published the EU's hydrogen strategy . This includes a precise idea of ​​the expansion targets for hydrogen. The desired strategy is divided into three phases (see Figure 1): 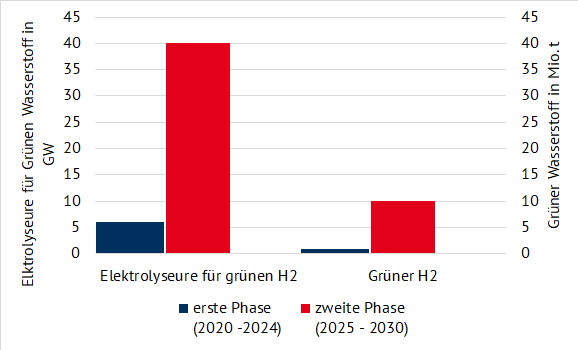 The ramp-up of green hydrogen in Germany

In a joint study with Greenpeace Energy , Energy Brainpool examined the future use of green hydrogen in Germany. Based on the results of our modeling, we have developed various scenarios. We would like to explain some of the results and two of the five scenarios that have been developed in this article. You can find a more detailed overview of all studies in our study directory .

The following Figure 2 shows in the first step the planned capacity of the electrolysers depending on the scenario for the key years 2025, 2030, 2035 and 2040. In the reference scenario (“Stated Policies”) the expansion follows the goals of the German National Hydrogen Strategy and the National Development Plans. The capacity of the electrolysers will increase to 5 GW by 2030 and to 10.5 GW by 2040. It is assumed that the expansion of renewable energy systems follows the ramp-up of the hydrogen electrolysers.

In the "Acceleration - cost-optimized" scenario, the solar and wind power supply increases steeply. The fleet of electrolysers can be expanded correspondingly quickly. In 2040, their electrical output will be 107 GW - 10 times the forecast capacity in the reference scenario. 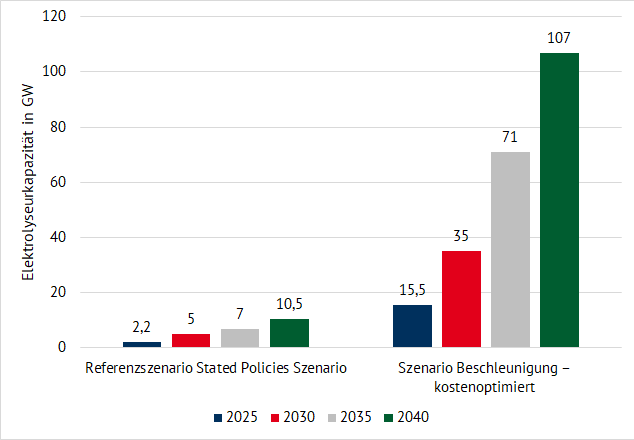 Figure 2: Planned capacity of the electrolysers depending on the scenario for the reference years 2025, 2030, 2035 and 2040 (cumulative) (Source: Energy Brainpool) 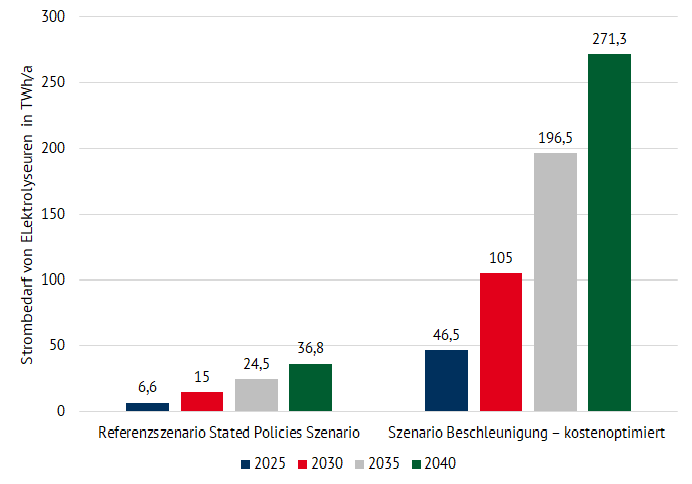 Figure 3: Planned electricity demand of the electrolysers depending on the scenario for the reference years 2025, 2030, 2035 and 2040 (cumulative) (Source: Energy Brainpool)

So there is still a lot of room left for developments on hydrogen and electrolysers. Which paths will ultimately be followed depends heavily on the political framework conditions in the coming months and years.

What will be important in the coming months?

The new EEG was passed at the beginning of this year . The new § 69b EEG 2021 exempts electricity purchases from paying the EEG surcharge as long as the electricity is used by a company to produce green hydrogen. The electricity used for production may only come from renewable energies that do not benefit from funding under the EEG. The electrolysers must also be connected to the grid via their own meter point.

The subsequent use of the hydrogen is irrelevant. In addition, this only applies to facilities that were put into operation before 01.01.2030. With the new section 27b KWKG, the CHP surcharge is no longer applicable, provided that the above conditions are met.

These levy exemptions are directly related to the new § 93 EEG 2021 and the definition of green hydrogen there. The paragraph provides for a comprehensive authorization to issue ordinances on requirements for green hydrogen. This is to be presented by the BMWi in spring 2021. In particular, "requirements in terms of content, space or time can be set there in order to ensure that only hydrogen is considered green hydrogen that was actually generated with electricity from renewable energies and that is compatible with the goal of a sustainable development of the energy supply".

It therefore remains to be seen what requirements will be placed on the production of green hydrogen in the future. One question will certainly be how a green electricity purchase should be proven. Because certificates of origin will probably not be sufficient (source: BHH Group ).

On February 10, 2021, the legislature passed a draft law to amend the EnWG. The draft contains amended or new definitions, a new section on the regulation of hydrogen networks and transitional provisions. Hydrogen is now defined as an independent energy carrier alongside gas. However, the innovations only apply to pure hydrogen pipelines and not to networks in which hydrogen is mixed with natural gas. It should be noted that the regulations are transitional solutions until the EU Commission delivers concrete proposals for the regulation of hydrogen at the end of 2021. That the German legislator will implement this in German law, however, is only expected from 2025 (source: CMS ).

It remains exciting to see which changes in politics will follow. Possible funding instruments for green hydrogen are the obligation to label PtX products with CO 2 , a quota system for green hydrogen or “Carbon Contracts for Difference” (CCfD).

"One question will certainly be how a green electricity purchase should be proven. Because certificates of origin will probably not be sufficient."

Simon, good to see Germany is addressing verification, because it isn't one question - it is the question.

Many don't realize using hydrogen as a liquid fuel was a 1990s-era marketing creation of the oil industry. With the promise of electric vehicles, industry analysts foresaw the end of gasoline. They realized hydrogen made from steam-reformed methane could be marketed as a "green" fuel by disingenuously emphasizing the only exhaust from fuel-cell vehicles is water vapor - while neglecting copious carbon emitted during its production.

At this point, planning for hydrogen production goals in 2040, 2050, and beyond is grossly irresponsible. We need to determine first whether electrolyzed hydrogen - its compression/liquefaction, and its transpport to point-of-use - could ever be remotely cost- or energy-effective. Currently it isn't, and with a tiny sliver (300 tons/yr) of truly green hydrogen produced worldwide, the most likely outcome of committing to it now is building in continued reliance on fossil-fuel methane.

My ancestors migrated from Germany to the U.S. in the 1860s. They were spirited, resourceful entrepreneurs who crossed an ocean in a day when safe arrival at a U.S. port was anything but assured. Today, I hope their descendants will have the courage to overcome their irrational, cultural fear of nuclear energy, and focus on its potential instead. Despite two high-profile accidents with machinery built half a century ago, it is by far the most promising source of energy in the fight against climate change - an unfolding disaster to which Fukushima is already insignificant by comparison.