Hydrogen, the fuel that can provide a future. 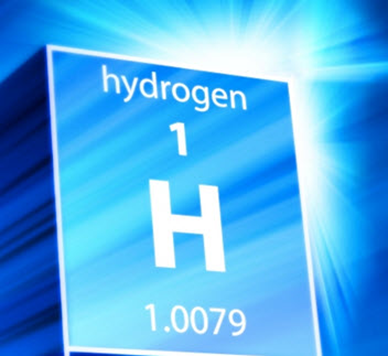 The International Energy Agency (IEA) released a report “The Future of Hydrogen” last week that suggests  developing renewable sources of hydrogen fuel is a reasonable step toward a low-carbon future.

The report emphasizes that renewable energy needs to be scaled up to produce hydrogen because nearly all of today’s hydrogen is produced from natural gas and coal and this production is responsible for 830 million tonnes of CO2 emissions per year.

Concurrently to the IEA announcement China’s father of electric cars said that hydrogen is the future,  the World Economic Forum proclaimed, hydrogen isn't the fuel of the future. It's already here and the Institution of Engineering and Technology said the United Kingdom could use hydrogen instead of natural gas – if it can make enough of it.

Four years ago this writer submitted an entry The Diverse Energy Potential of the Water Carrier Hydrogen to the MIT Climate CoLab contest, which was one of the semi-finalists in the energy-water nexus category.

The premise was deep water electrolysis produces hydrogen with the potential to produce mechanical, electrical and gravitational energy as well as water. Hydrogen is a water as well as energy carrier. Produced in deep water it arrives pressurized at the surface and can rise from there to the top of any structure where it can be converted to fuel and water that in turn falls to the ground back to the surface to produce additional energy.

In other words deep water electrolysis addresses the IEA’s concern about emissions, reinforces China’s interest in hydrogen and is pointed out here there is more than enough renewable energy available from ocean thermal energy conversion to produce all the hydrogen the world, not just the UK, needs.

It was suggested four years ago the world was looking to the United States, specifically California for leadership on climate change and that a Lawrence Livermore team has demonstrated that electrolysis of saline water produces not only hydrogen, chlorine and oxygen gases, the resulting electrolyte solution is significantly elevated in hydroxide concentration, which are strongly absorptive and retentive of atmospheric CO2.

The following is a schematic of this process. 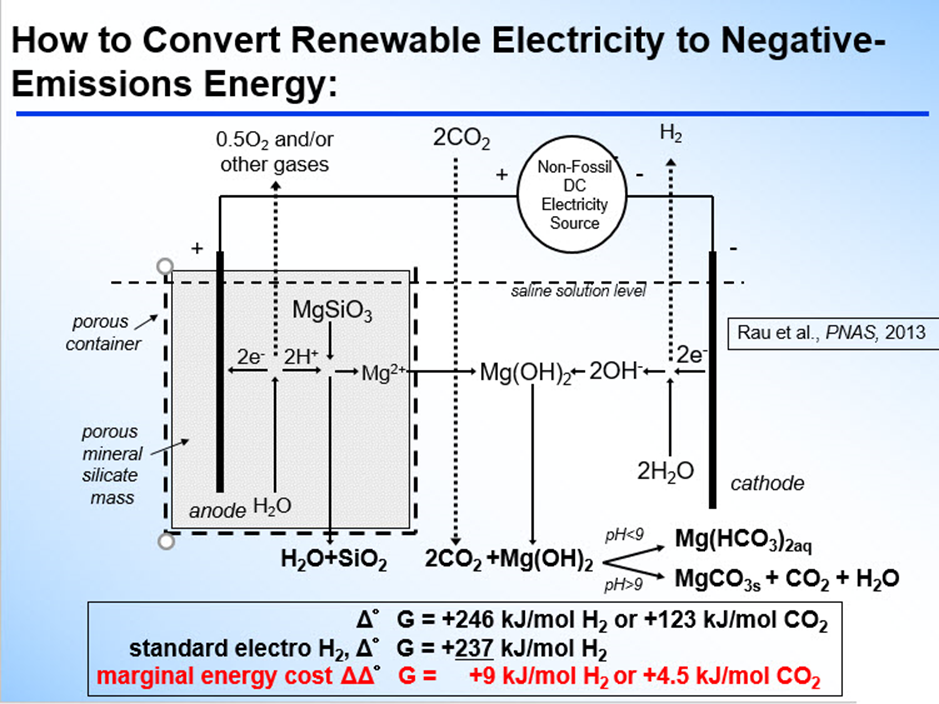 Below is a schematic of NEOTEC: Negative-CO2-Emissions Marine Energy With Direct Mitigation of Global Warming, Sealevel Rise and Ocean Acidification presented by Dr. Gre Rau, Gary Noland and this writer to the American Geophysical Union Fall Meeting, San Francisco, Dec. 13, 2016: 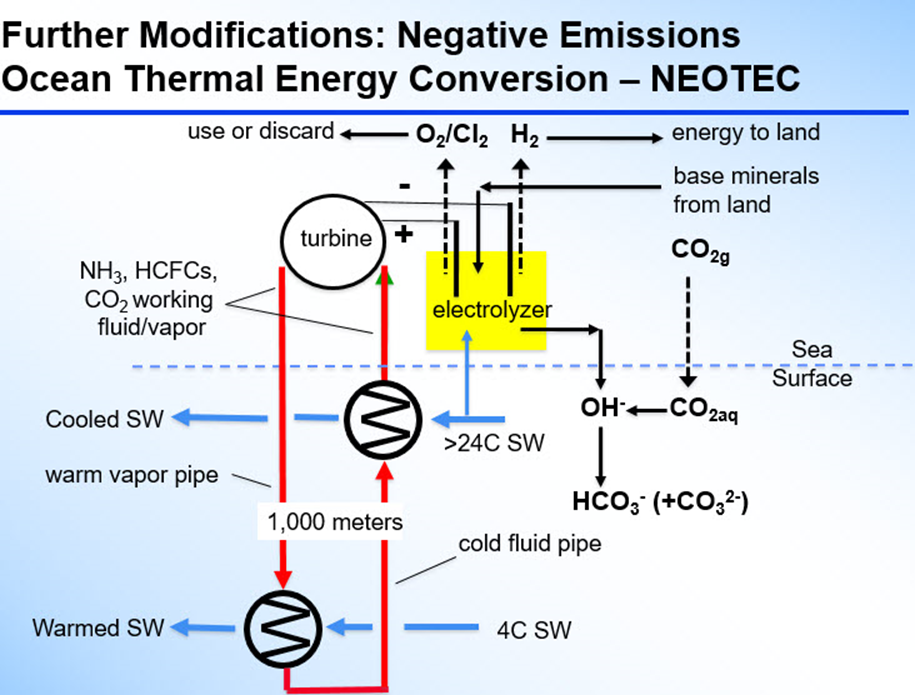 As pointed out in the MIT submissions, carbon lock-In is the self-perpetuating inertia created by large fossil fuel-based energy systems that inhibits public and private efforts to introduce alternative energy technologies like NEOTEC.

It will take decades to turn the global energy ship a round so it is imperative we get the greatest benefit from the actions taken to prevent a greater than 2ºC temperature increase. With NEOTEC every watt of energy produced is a thermal watt of global warming heat converted to productive use and at least 13 thermal watts moved to the safety of the abyss .

We can’t waste another election cycle before coming to grips with the problem of global heating. Especially when we can have energy that reduces surface heat, sea level rise and ocean acidity.

Jim - I'm trying to access your submission to the Climate Co-Lab contest:

But I'm not seeing any images of what I assume are schematics - should I be?

Bob I change internet providers since the submission. I assume the graphics were embedded and are no longer iinked, sorry.