Media coverage of energy has focused heavily on oil prices, lately, for understandable reasons. Oil’s dramatic plunge and subsequent volatility would be newsworthy, even if petroleum weren’t still our leading source of energy, especially for transportation. In this context, the dog that hasn’t barked is natural gas, although oil and gas are still linked by common drilling hardware and often produced from the same wells. With oil drilling being curtailed in response to low oil prices, should we be concerned about natural gas supplies in the months and years ahead?

At first glance the answer ought to be a straightforward “no.” As most people now know, US drillers figured out how to tap the country’s vast shale gas resources economically. US gas production is at record levels, after rising steadily since 2006 and surpassing former top producer Russia around 2009. US natural gas inventories were severely depleted following last year’s “Polar Vortex” winter, but output grew fast enough to keep the benchmark price of gas below $4 per million BTUs this winter, despite below-average temperatures east of the Mississippi.

However, in assessing gas supply under low oil prices we must factor in the industry’s response to the natural gas price collapse in 2008. The prices of oil and gas both dropped precipitously during the financial crisis, but gas didn’t recover to the same extent as oil. In 2007 the average spot price of natural gas on an energy equivalent basis was just over half that of West Texas Intermediate crude (WTI). By 2010 gas was worth only a third as much as oil, and by 2012 just 17%–the equivalent of $16 per barrel in a world of $100 oil. Drillers responded accordingly.

As the Energy Information Administration (EIA) chart below depicts, drilling for gas fell sharply from 2009-12, while  “oil-directed drilling” rose just as sharply. In fact, these were mainly the same rigs, redeployed to pursue different targets–sometimes in the same shale basin–as gas grew cheaper. 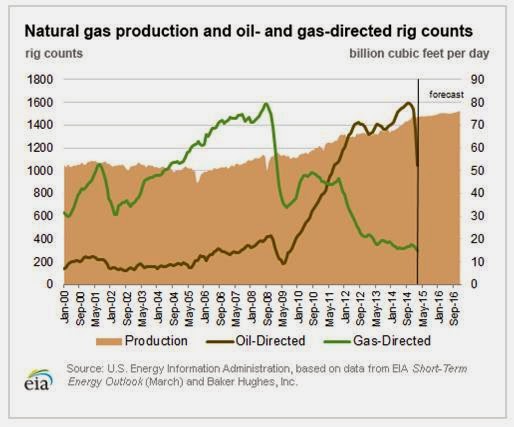 So shouldn’t natural gas production have fallen in tandem with the decline in rigs drilling for gas? The extremely useful charts in the EIA’s latest Drilling Productivity Report help to explain why gas output continued to climb. First, just as the increasing productivity of shale oil drilling has confounded expectations about how soon US shale oil production would begin to decline after prices fell below $50 per barrel, shale gas drilling productivity improved rapidly following the gas price collapse.

For example, between 2009 and 2012 average gas production per rig–not per well–in the mainly gas-yielding Marcellus Shale more than tripled. From 2012 -14 it doubled again. Those gains reflect the combination of improvements in drilling efficiency (more wells or more feet drilled per month), improvements in hydraulic fracturing effectiveness, and companies targeting more productive well sites as knowledge of the basin’s geology increased.

A key development following the gas price collapse was the growth of gas production from wells drilled in pursuit of shale oil. The best example of this is in the Eagle Ford Shale in Texas. While oil production there grew from virtually nothing to over 1.7 million bbl/day, the region’s gas output nearly quadrupled, to 7.5 billion cubic feet (BCF) per day, or 10% of total US gas production.

Now we’ve entered a new chapter, due to a global oil surplus. As of the latest drilling rig count from Baker Hughes, oil-directed rigs employed in the US have fallen by around 45% since November 2014, and gas-directed rigs are down  by a quarter. A few companies may have shifted from oil back to gas, but the overall rig trend is still down for both.

The net result is that the EIA expects oil production from the major US shale basins to remain essentially flat from March to April, while gas production should still grow by about 0.3%. How much farther would US shale oil and gas drilling have to contract before lower rig counts swamped productivity improvements for gas? Comparing those figures to the growth rates in previous months, perhaps not very much.

Of course the US represents only about a fifth of the global gas market. Elsewhere, especially in Europe and Asia, many gas sales contracts are pegged to oil prices, while supply is dominated not by flexible shale, but by large conventional gas fields and the trade in liquefied natural gas (LNG). So outside the US, lower oil prices may do more to stimulate gas demand than to shrink supply. Cheaper gas imports into China are apparently already having an impact on coal consumption.

That could create new opportunities for companies developing LNG facilities to export US gas, at the same time that the economics of such exports become more challenging. In markets like Asia, the effect of lower oil prices has cut the gap between landed LNG prices and US pipeline gas–and hence the motivation for exports–by more than half.

Even after oil’s collapse, US natural gas at the Henry Hub has recently traded at about one-third of the price of WTI, per-BTU of energy. The contraction of drilling in response to low oil prices may tighten supplies and nudge the prices of both commodities higher, reminding us that gas isn’t entirely immune to oil’s influence. However, with US gas inventories ample, the market doesn’t seem to anticipate either a spike in gas prices this summer, or a narrowing of gas’s discount vs. oil any time soon.