"How Effective Is The Paris Agreement?"

The Paris Agreement is an international treaty on climate change, adopted by 196 parties at COP 21 in Paris, on 12 December 2015 and entered into force on 4 November 2016. So what has been the emissions reduction record of those 196 parties since 2016?

Its goal is to limit global warming to well below 2, preferably to 1.5 degrees Celsius, compared to pre-industrial levels, and requires countries to set emissions-reduction pledges. Every five years, countries are supposed to assess their progress toward implementing the agreement through a process known as the global stocktake, with the first planned for 2023. Countries set their own targets, and there are no enforcement mechanisms to ensure they meet them.

President Barack Obama exercised his executive power when he entered the Paris Agreement, signing it in August 2016 without ratification from the Senate. Consequently, the Agreement can be rejected or rejoined simply by Executive Order.

To begin assessing the effectiveness of The Paris Agreement, the performance of different countries in their amount of CO2e over the years is key, as shown in Chart 1. Key emitters are China, U.S., India, Asia, and Europe. 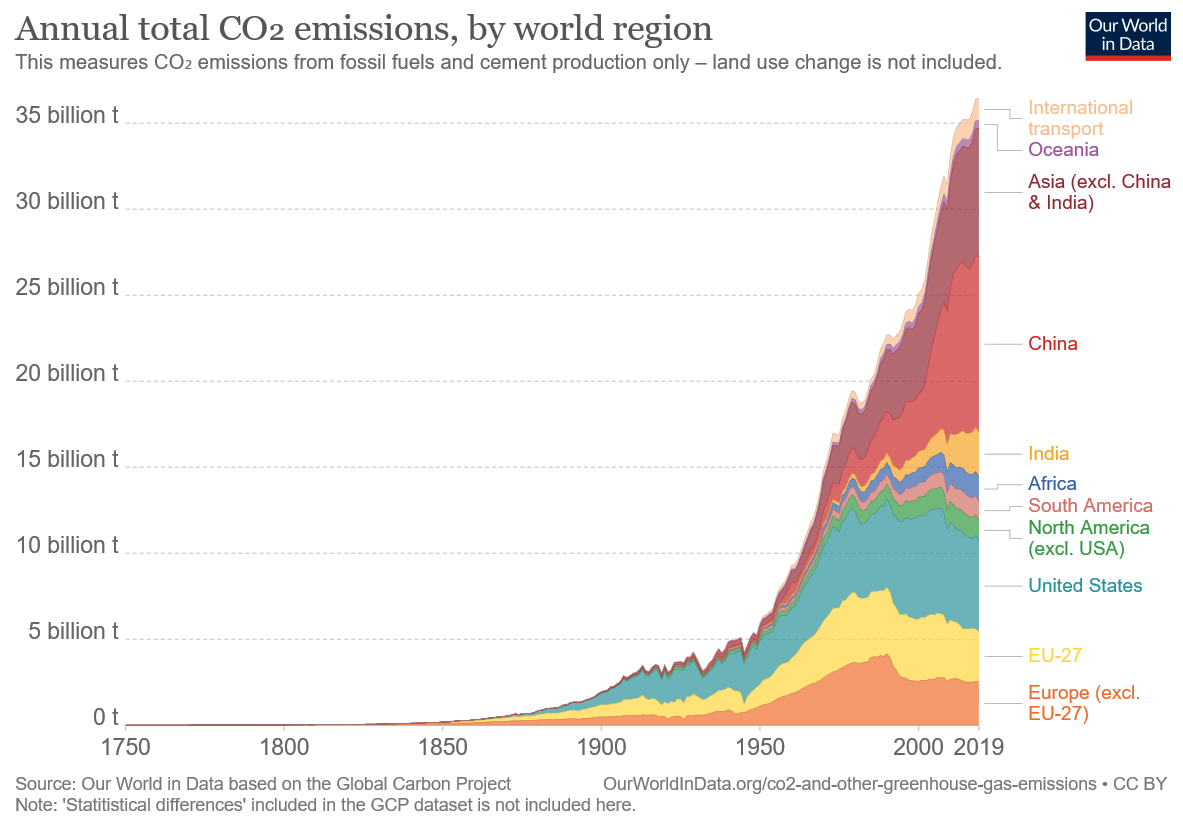 Looking at the relative share of 2020 emissions of the largest emitters CO2e   shown in Chart 2 reveals China is responsible for 28%, the U.S. for 15%, and India for 7% of world emissions. 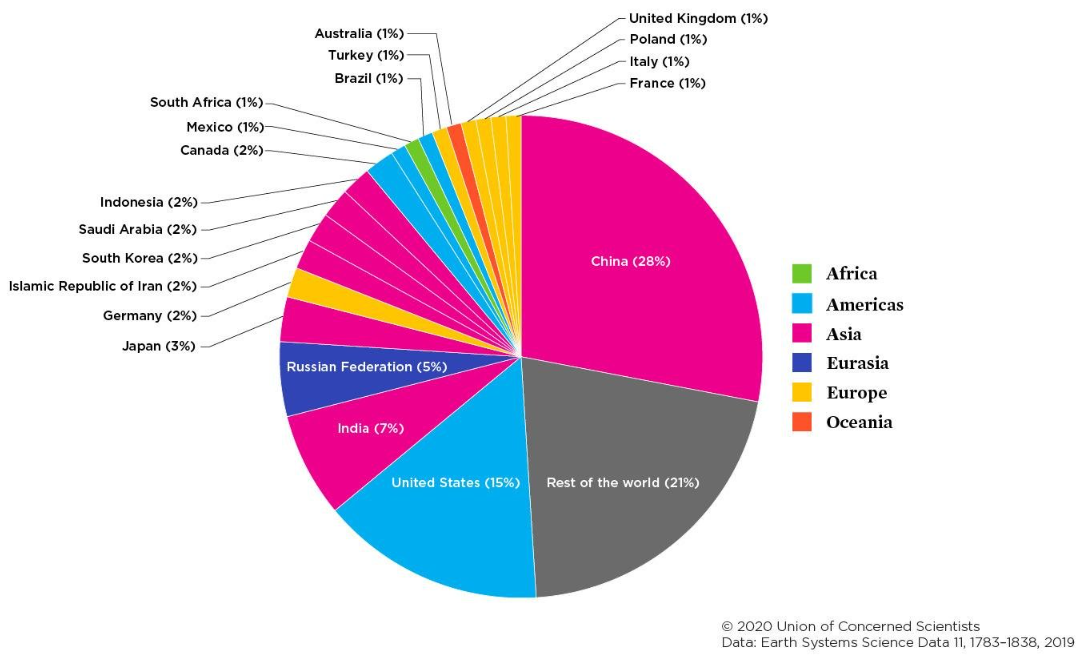 Although China’s emissions during 2014-2016 leveled as shown in Chart 3, it raised hopes of decoupling its economic growth from pollution, but the numbers then continued to climb in subsequent years. Although the U.S. and the EU made progress lowering its emissions, China and India increased their CO2e emissions significantly. 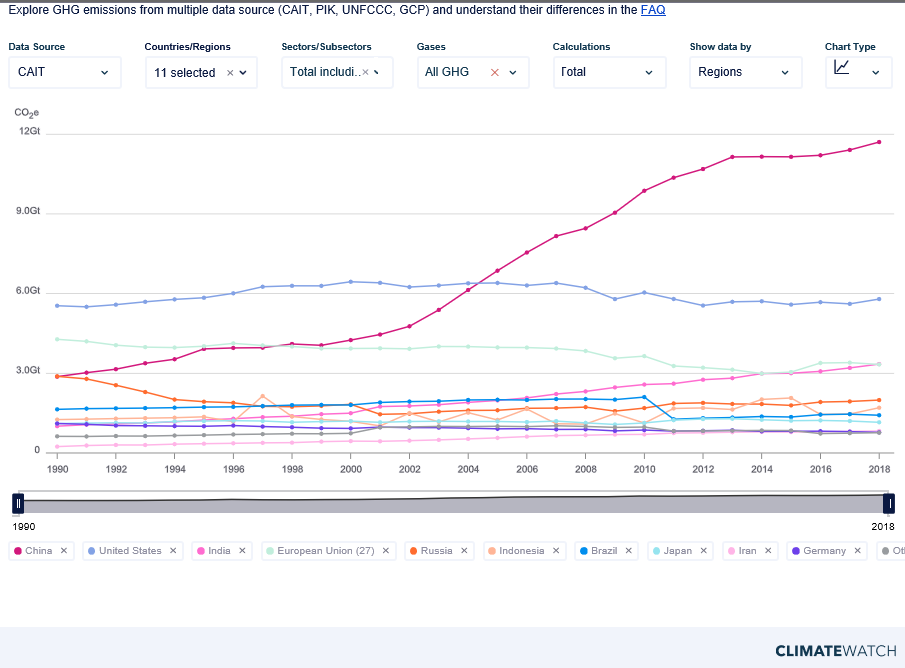 The Paris Agreement may be a landmark in the multilateral climate change process, but it has few, if any, teeth to drive enforcement and target achievement, as exhibited by China and India’s performance post signing. It will be 2023 before the first analysis of performance is calibrated, and the first 5-year cycle didn’t start until 2018, a full 2 years after signing.

To better frame the efforts towards the long-term goal, the Paris Agreement invites (not demands, or regulates) countries to formulate and submit by 2020 long-term low greenhouse gas emission development strategies (LT-LEDS).

With the Paris Agreement, countries established an enhanced transparency framework (ETF) in which starting in 2024, countries will report on their progress toward climate change mitigation. There is a lack of accountability in reporting each year the total emissions by country to monitor progress toward the ultimate goal.

The Paris Agreement requires all Parties to put forward their best efforts through “nationally determined contributions” (NDCs) and to strengthen these efforts in the years ahead.

How many contracts does your company sign that emphasize “best efforts” rather than independently-assessed performance metrics on which to judge success or failure?

“The Paris Agreement is not enough. Even at the time of negotiation, it was recognized as not being enough,” says the Council on Foreign Relations Alice Hill. “It was only a first step, and the expectation was that as time went on, countries would return with greater ambition to cut their emissions.” Unfortunately, the vague nature of performance metrics has not led to anticipated significant performance, leading to Yale University economist William Nordhaus’s idea to penalize countries that do not meet their obligations.

If a grade is awarded to the Paris pact “based on whether we have any prospect of meeting a 2°C target, from that point of view, it’s probably a D or an F,” says Michael Oppenheimer, a climate scientist and policy expert at Princeton University.

“The Paris Agreement is full of soaring ambitions, and few enforcement mechanisms, thus setting the stage for falling short due to a lack of a few concrete penalties”, per Science Magazine (https://www.sciencemag.org/news/2020/12/paris-climate-pact-5-years-old-it-working).

Global greenhouse gas emissions have continued to grow since the Agreement was signed with a billion tonnes of CO2e added to annual figures between 2015 and 2018, with the trend dominated by emerging economies in Asia. In recent years, U.S. carbon emissions have been on a downward trend - as it moves away from coal towards natural gas and renewable energy as shown in Chart 4. 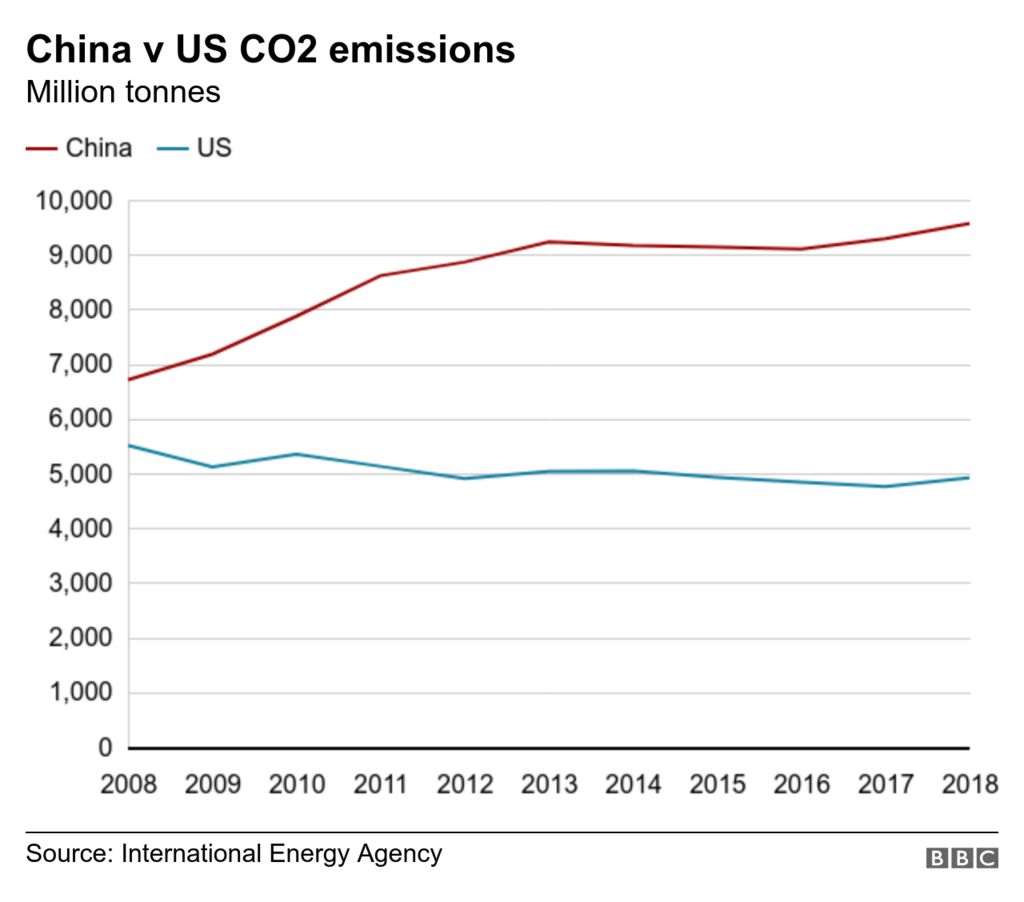 The IEA graph in Chart 5 demonstrates the efforts made by the U.S. and the EU in lowering emissions during the 2015-2019 time frame, China, India, and Japan have increased emissions.

Cause Of China’s Emissions Growth

Under The Paris Agreement, China pledged that its emissions would peak around 2030, far later than other signatories, however, their emissions have continued to grow.

China coal consumption, which had declined from 2013 to 2017, driven in part by a push to improve China’s notorious air quality, began to rise of late as the economy faced economic headwinds and the government sought to stimulate industrial growth.

CO2e emissions from energy use around the world were 2 percent higher in December 2020 compared to global levels during the same month in the previous year, according to the intergovernmental International Energy Agency.

In 2020, China approved the construction of a further 36.9 gigawatts (GW) of coal-fired capacity, three times more than a year earlier, bringing the total under construction to 88.1 GW. It now has 247 GW of coal power under development, enough to supply the whole of Germany. China also put 38.4 gigawatts (GW) of new coal-fired power capacity into operation in 2020, according to new international research, more than three times the amount built elsewhere around the world and potentially undermining its short-term climate goals.

Including decommissions, China’s coal-fired fleet capacity rose by a net 29.8 GW in 2020, even as the rest of the world made cuts of 17.2 GW, according to research released by Global Energy Monitor (GEM) and the Helsinki-based Centre for Research on Energy and Clean Air (CREA). Source: (https://www.reuters.com/article/us-china-coal/chinas-new-coal-power-plant-capacity-in-2020-more-than-three-times-rest-of-worlds-study-idUSKBN2A308U)

China’s CO2e emissions increased again by around 2% in 2019, based on recently released official economic data, and 65% of the annual growth in energy consumption came from fossil fuels. China has moved aggressively to add coal capacity from 2019 to 2023 as shown in Chart 6.

New coal-fired power capacity in the pipeline in China are color-coded, with red meaning new capacity cannot receive permits to move ahead towards construction per the Global Energy Monitor. However, permitting loosened for 2019 with construction started or restarted on another 18GW of capacity, while 37GW of previously inactive projects have been revived.

The industry group for China’s power sector giants, China Electricity Council, has argued that coal-power capacity will reach 1,300GW by 2030, up from 1,050GW today. This target is based on its projections for annual electricity demand and the need for capacity to meet peak loads. While the rest of the world is closing coal plants, China is adding to the coal emissions problem by building 250 GW of more coal-fired generation plants.

Chart 7 illustrates the trajectory of China’s coal industry, one that is growing in direct defiance to The Paris Agreement. 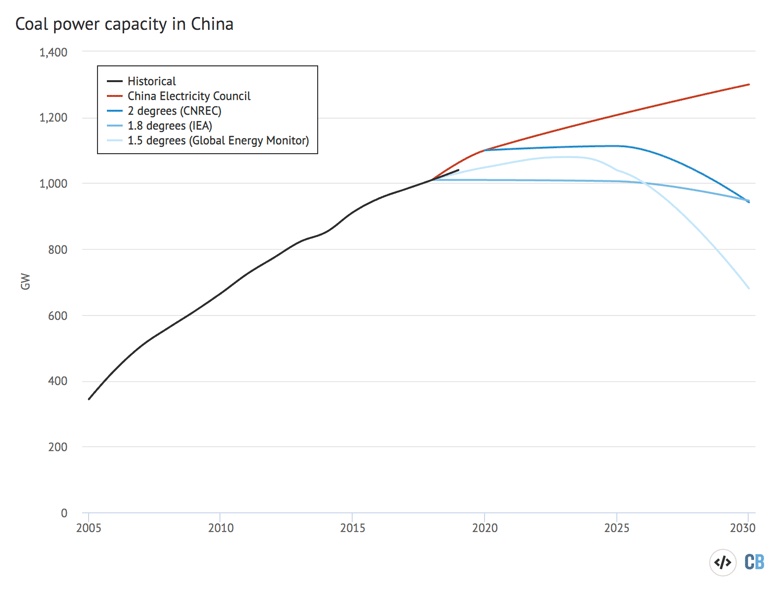 The new wave of coal power in China will clearly pose risks for global efforts to limit climate change, yet where is the enforcement measures of The Paris Agreement?

In a world full of good intentions, so The Paris Agreement has relied on all countries of the world to reduce emissions without any provision for penalties for non-compliance. For success, does your company rely on good intentions or contractually-enforced rewards/penalties to strive for exemplary performance?