How Can Cities Reduce Their Ecological Footprint? 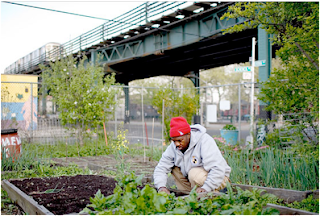 Is this the future of cities?

The last post in this series looked at the vital role of ecological footprinting in ensuring that our individual actions are truly sustainable – i.e. within the limits of what the Earth’s resources can provide. This is called ‘one planet’ development.

This post will begin to look at how communities of varying sizes might transition to one planet living, in other words, how towns and cities can reduce their consumption levels.

The world’s citizens must reduce their collective footprint to one planet equivalent or face various catastrophes: out-of-control climate change, mass extinctions, famine and the death of the oceans to name but four on the agenda.

Yet all around the world, many different projects and initiatives to tackle their impact – both top-down and bottom-up – are evolving, especially in urban areas, as cities gain more confidence. They are supported by a plethora of pan-global organisations such as C40, ICLEI and the World Future Council.

These initiatives cover most fields from energy and water to transport, buildings and industry, with the latter being particularly tough to tackle.

Cities hoover up resources from the rest of the world. Unless those resources are both replenished in their place of origin and reclaimed for reuse in closed loop systems within cities, then cities cannot survive indefinitely.

So it is in cities where the battle for the future will be most harshly fought.

To help us fight this battle effectively, we need assured processes. Enter the role of standards.

Standards are essentially manuals containing a set of guidelines and metrics to be followed and met in pursuit of whatever goal you’re setting yourself.

There is a new standard to measure the sustainability of cities: Indicators for City Services and Quality of Life (ISO 37120). It is being piloted as part of an integrated suite of standards for sustainable development in communities by such as Mexico City.

There are many other indicators and standards for measuring sustainability: for example the United Nations Sustainable Development Goals contain a goal specifically about cities, and there is the New Urban Agenda, not to mention the Global Footprint Network’s Ecological Footprint Standards 2009

Which standards should we use?

Standards can be relative or absolute. In other words, they can set a target of, say, a (relative) 50% reduction from a certain baseline, or an (absolute) target of, say, zero waste to landfill.

Absolute targets enable comparison and ranking between different cities or projects; we can compare the performance of communities by dividing their consumption by their population.

Absolute targets can also be linked to the (absolute) resources of the planet. In fact, standards must refer to planetary boundaries.

Standards should also be simple to communicate and implement – especially in relation to the gathering of the necessary data.

They might be designed to make it easy automate the gathering of data from existing data collection methods.

According to John Delaney of the British Standard Institute, “What option is chosen depends on what suits a city and/or what they are most comfortable with.”

Mathis Wackernagel, president of the Global Footprint Network, says that, “Perhaps the driving question becomes – what do places need to know in order to operate safely in an ecologically ever more constrained world. Cities need to have the critical information.”

Back in Wales, the home of One Planet Development, its Well-Being of Future Generations Act is its very own charter to make Wales sustainable within a generation or two. It uses various metrics and standards to measure this and some have yet to be decided at the local level. 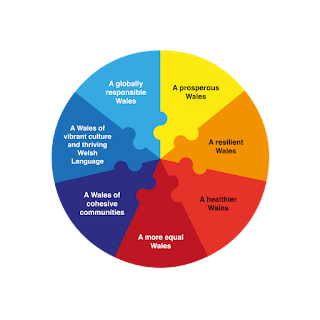 The seven Well-Being Goals in the Well-Being of Future Generations Act.

It is essentially about spending. The Act means to ensure that the spending of public money is done in a sustainable way. That is to say, it does not jeopardise the ability of future generations both to live well and within planetary limits. The list of metrics includes:

To try and ensure this is done, procurement strategies still need to be thrashed out.

And there is an independent Commissioner for Future Generations, who acts as a government watchdog.

(In England, the Tory Government abolished this role, which was held by Jonathan Porritt, in 2011).

The path towards One Planet Towns and Cities

So here is my deceptively simple six-step process for a town or city that decides it wants to reduce its ecological footprint to a fair and sustainable level:

This makes it sound easy. But the task ahead is momentous. Above all it requires skills, knowledge and leadership.

You know, anyone can become a leader. You just have to decide to do something.

If you doubt this, look for a moment at the enormous difference a small group of people in Todmorden have made. They started the ‘Incredible edible’ guerilla food-planting movement now copied all over the world.

One Planet Towns vs. Transition Towns

Transition towns do not generally measure the efficacy of their actions. While they may very well be doing lots of good work, it may be that the efforts of some are only scratching the surface of what needs to be done, and at worst, wasting their time.

They would have to account for the whole picture of consumption of their community in order to be sure, and then check what difference their actions are making over time. This is hard for voluntary organisations to do, and indicates why it is crucial to work with the authorities.

But the authorities often do not want to know. In such cases they need to be trained to see the benefits that would accrue to their communities. Success depends on both top-down and bottom-up co-operation.

The need for training

In 2018 I am setting up a new body called The One Planet Institute that will contribute to this work. Contact me for more information or to get involved.

Measurement and verification may be boring. It may be hard work. It might even seem a waste of time to some people.  But I know from my experience in energy management and in the post-occupancy evaluation of buildings that were intended by architects to be low-carbon, that it is the only way to be absolutely sure we are NOT wasting our time.

In short, that we are targeting our efforts in the most worthwhile directions.

The next article in this series will look at the hardest component of the ecological footprint to reduce – food production and consumption.

One Planet Living is about showing the way: