How Biden Can Unleash $7.8 Trillion Investment And Create 6 Million Jobs By Expanding The Grid

The COVID-19 pandemic has dealt a devastating blow to the economy, creating an urgent need to stimulate a sustainable recovery that creates good jobs. A new study shows building a Macro Grid across the Eastern United States could create 6 million high-wage jobs across the region, while dramatically reducing harmful greenhouse gas emissions.

But despite myriad demonstrated economic and climate benefits, significant policy barriers stand in the way of planning, permitting, and paying for new transmission projects.

President-elect Joe Biden can get to work overcoming these barriers on day one, starting with actions by the U.S. Department of Energy (DOE), Federal Energy Regulatory Commission (FERC), and Department of the Interior (DOI). By developing a coordinated and comprehensive strategy to harness the economic opportunity of renewable energy across our grid systems, the federal government can accelerate transmission development and avoid delays while fairly allocating costs and benefits.

The U.S. transmission system is the “interstate highway” of electricity delivery, transferring power long distances to the distribution lines supplying homes and businesses. But most of this system was constructed in the 1950s and 60s and is well past its life expectancy. This system is also highly fragmented – a mishmash of regional, state, and local authorities oversees transmission system operation and development. 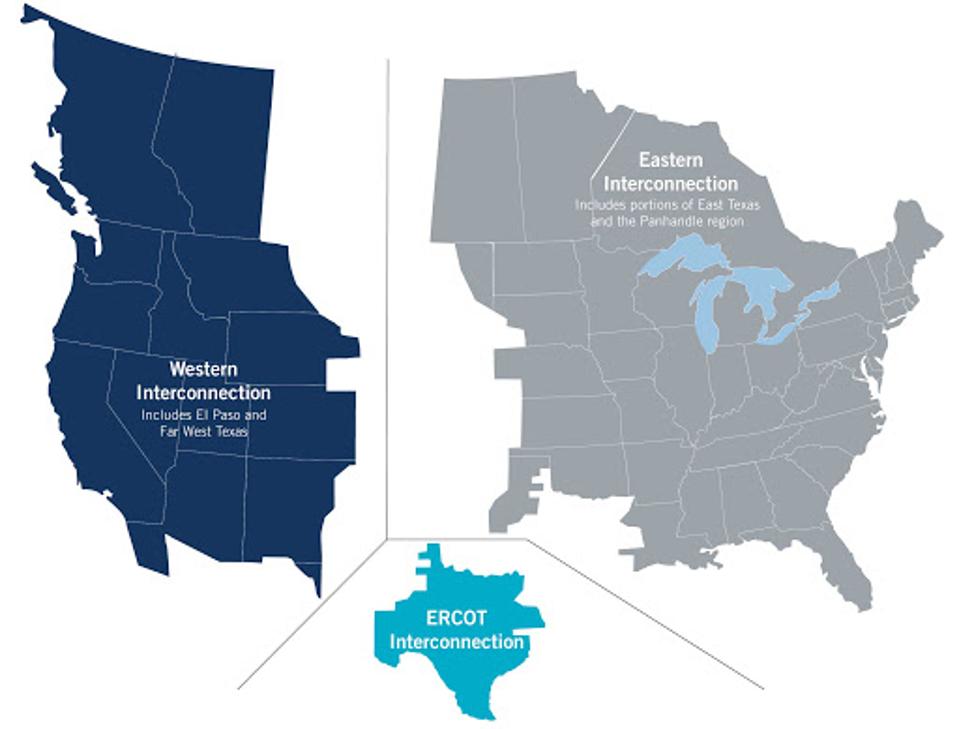 The analysis compared renewable and transmission deployment under modest CO2 emission reductions in the electricity sector against renewable and transmission deployment to reach a 95% reduction by 2050. An interconnected Eastern power grid would unleash up to $7.8 trillion in private investment, create 6 million good-paying jobs, and reduce consumer costs while meeting Paris Agreement climate goals.

Rapidly declining costs, state policies, and consumer demand have ushered in an era of rapid renewable energy growth, but a safe climate future demands accelerating renewables deployment. This requires connecting dense population centers needing clean energy to where the country’s renewable energy resources and usable land are most abundant. The 15 states between the Rocky Mountains and the Mississippi River represent 88% of U.S. wind potential and 56% large-scale solar photovoltaic potential, yet only represent 30% of projected 2050 electricity use. 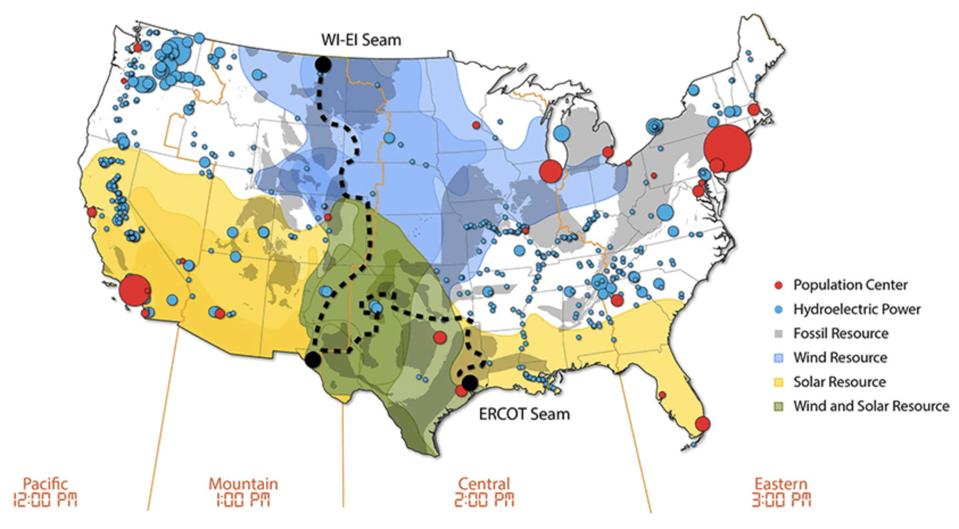 The ACEG study found an interconnected Eastern U.S. grid could provide access to a broader diversity of low-cost renewables across the entire region, enabling wind and solar to supply more than 80% of the region’s electricity by 2050, while enhancing reliability. The modeling highlights interconnection’s benefits where wind and solar variability are offset by geographic diversity: Wind and sunshine are generally available somewhere at any given time. They key is connecting these regions with adequate transmission.

The ACEG study found an integrated transmission system, where wind and solar provide 80% of electricity, would deliver cumulative savings of more than $105 billion through 2050, reducing customer electric bills a third from current levels and saving a typical household more than $300 a year. 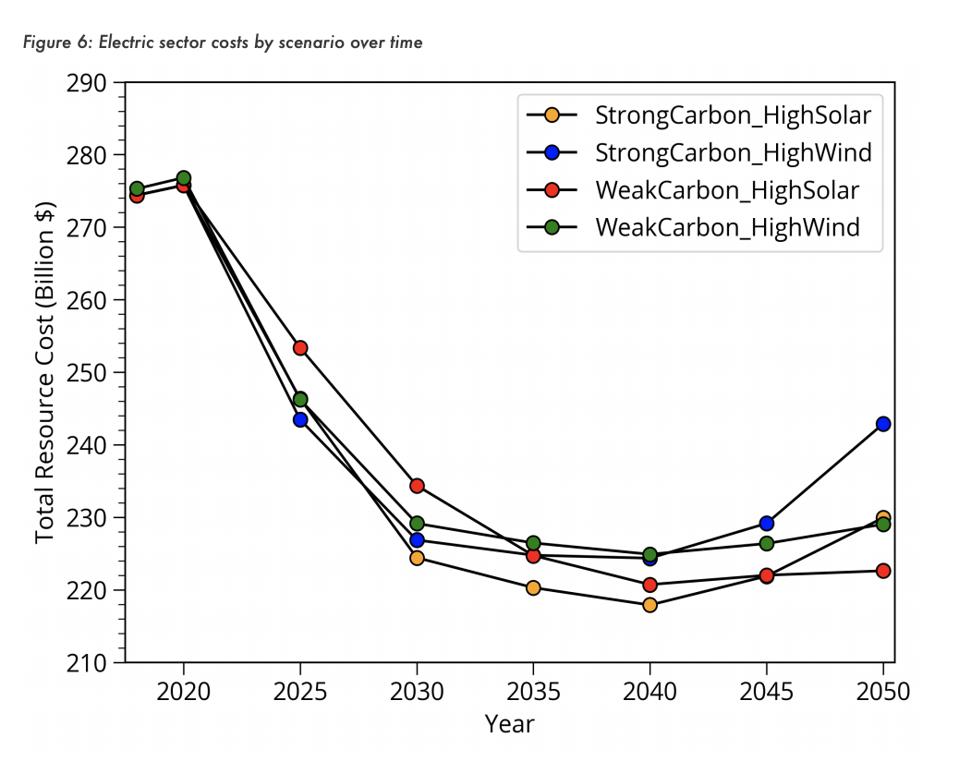 Recent National Renewable Energy Laboratory modeling found similar results, showing investments to strengthen connections between the Eastern and Western Interconnections would return more than $2.50 for every dollar invested and save customers at least $3.6 billion a year by 2038 by sharing low-cost wind and solar resources while enhancing regional flexibility. And yet another recent study found inter-state coordination and transmission expansion would reduce the cost of a 100%-renewable U.S. power system 46% compared with a state-by-state approach.

The modeling is reinforced by the value generated by real-world transmission projects. In 2017, the CapX2020 initiative built 800 miles of new transmission across Minnesota, North and South Dakota, and Wisconsin. The $2 billion project added $4 billion in regional economic benefits, returning nearly $2 for every $1 invested to customers and $150 million in revenue for state and federal taxes. The Southwest Power Pool has similarly seen massive transmission investments quickly paid off as lower cost wind enters the market, delivering lower costs for consumers. 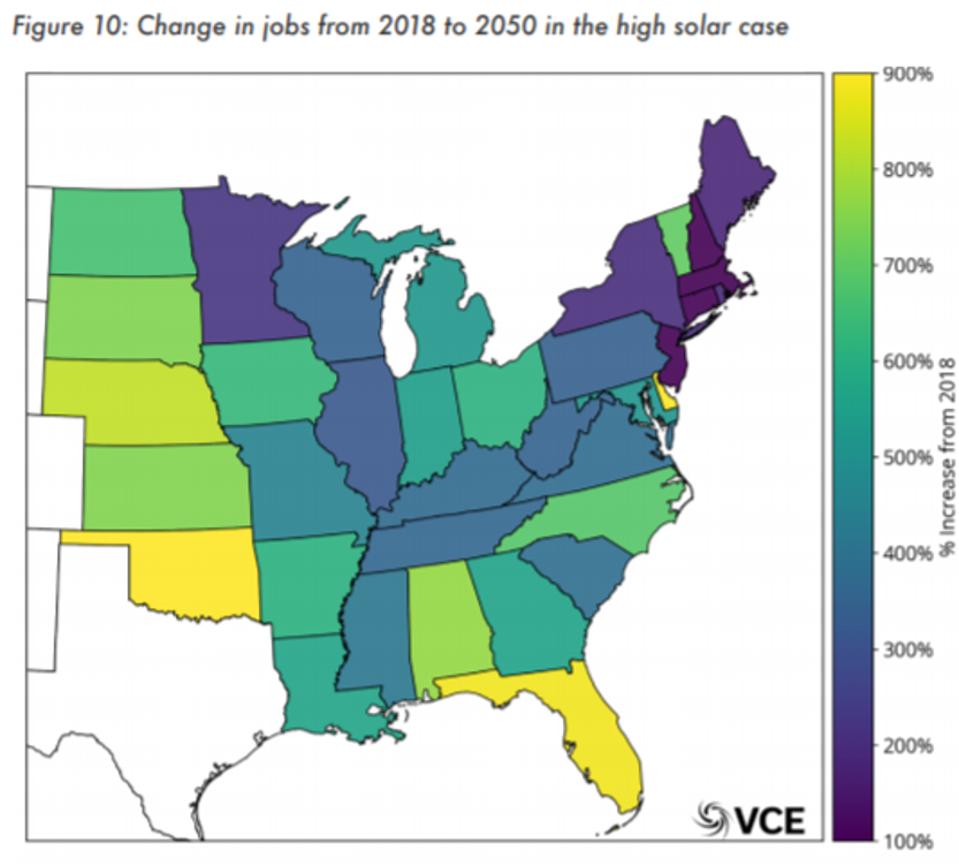 Many of these jobs are in transmission, but the majority come from wind and solar investments unlocked by transmission. Most of the wind and solar resources in America’s rural areas are currently stranded because insufficient transmission exists to deliver their power to market. Building out that grid will enable private investors to develop those clean resources, creating millions of new jobs.

“This is not just about job creation, it's about creating quality jobs that people can count on to do more than just put food on the table but also to be a ladder into the middle class,” explained Jason Walsh, Executive Director of BlueGreen Alliance in response to the ACEG study. Clean energy jobs pay 25% more than the national median wage and are more likely to health insurance and retirement benefits.

A Vision For A Safe Climate And Safe Communities

Clean energy infrastructure and transmission investments are also a climate imperative. ACEG found an expanded and modernized grid would facilitate a 65% reduction in electricity sector emissions by 2035, and more than 95% by 2050.

Transmission infrastructure that delivers clean energy can displace highly polluting coal-fired power plants that are often located in or near communities of color. ACEG modeling shows dangerous particulate matter from electricity generation, along with other harmful pollutants like sulfur dioxide, all drop to near zero by 2030 as dirty coal can no longer compete with clean energy. Integrating renewable energy with a more robust transmission system will have far-reaching benefits for public health, especially in historically disadvantaged communities.

Policy Change Is Needed to Modernize the American Grid

Obstacles stand in the way of achieving the opportunities of more interconnected, cleaner electricity grid, and our current regulatory and planning regime has not evolved to meet this opportunity. Most transmission projects drag on for more than a decade, while new solar and wind generation can be built in just around two years. While regional interstate transmission lines will benefit all consumers and the air we breathe, policies must evolve to meet this challenge.

The lack of a single decision-maker responsible for siting and approving these projects is arguably the largest barrier to grid modernization. Building across state lines requires siting approval from multiple government entities and faces potential legal challenges or objections in each jurisdiction.

Paying for transmission is the other primary barrier. Regional transmission authorities in Texas and the Midwest have pioneered successful policies to proactively plan transmission that maximizes economic and reliability benefits while broadly allocating transmission costs to those who benefit. These regions are now national leaders in renewable energy.

President-elect Joe Biden can get to work solving these challenges on day one, starting with new leadership at DOE and FERC developing a long-range, comprehensive electricity infrastructure strategy designed to harness the economic opportunity of rapid wind, solar, and transmission.

Time is not on our side when it comes to the clean energy transition. Though renewables are beating dirty fossil fuels on cost and are preferred by energy customers, without the infrastructure to support a rapid wind and solar buildout, we will not reduce electricity emissions in time to avoid climate catastrophe.

At the same time, investing in a modern, climate-resilient transmission system offers the opportunity to build back better and stronger with cleaner air and millions of new jobs. Transmission investments more than pay for themselves, and billions of private investment dollars are waiting to be spent. All policymakers need to do is unleash it.

If any sort of energy, grid, or infrastructure transition/innovation is going to work in this country and get majority support, it HAS to be marketed as creating jobs. It's clear that in the U.S. we are slow to embrace necessary changes. But job creation is going to be crucial in this post-COVID economy and it's going to be a way to sell these sorts of massive innovations and transitions this country needs.