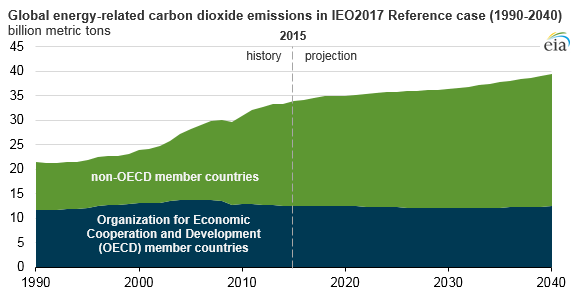 EIA projects that growth in global carbon dioxide (CO2) emissions from energy-related sources will slow despite increasing energy consumption. EIA’s International Energy Outlook 2017 (IEO2017) Reference case projects that energy-related CO2 emissions will grow 0.6% per year from 2015 to 2040, a slower rate of growth than the 1.8% per year experienced from 1990 to 2015. Emissions from countries outside the Organization for Economic Cooperation and Development (OECD) account for all of EIA’s projected growth in energy-related CO2 emissions.

EIA expects non-OECD countries to experience a 1.4% per year rate of increase in annual energy consumption from 2015 through 2040. The overall population in non-OECD countries is projected to grow more than twice as fast as that of OECD member countries, and the demand growth for energy services such as air conditioning, home electronics, and personal vehicles increases with rising incomes.

Some of the CO2 emissions related to increasing non-OECD energy demand are likely to be mitigated by changes in the fuel mix, similar to trends seen in the OECD countries. In 2015, renewable energy and nuclear power accounted for 14% of non-OECD countries’ energy consumption. By 2040, the IEO2017 projects that percentage to increase to 21%. EIA expects coal demand and related CO2 emissions, especially in China, to flatten as natural gas replaces coal in power generation and in industrial applications. China is currently the largest emitter of energy-related CO2 emissions in the world and is projected to remain in that position through 2040.

Because OECD economies are relatively mature, markets for many energy services such as air conditioning and personal transportation are saturated. Population growth is relatively low, and technology improvements largely mitigate population growth-related increases in energy demand in buildings and vehicles.

Automated systems can save time and man hours when properly utilized but some cases require live interaction.  How well is your customer care team responding to the frustration and confusion of ratepayers?

I shared some insights into Energy Central’s then brand-new Community Ambassador program back in October, and as we turn to the dog days of Summer and the participants continue to make great strides I thought it was due time for an article..