It’s been a long time since we covered Makani Power, the company developing kite-like wind turbines. But the company didn’t float away (bad pun intended). In fact, it has just been bought by Google, for development under its Google[x] division. 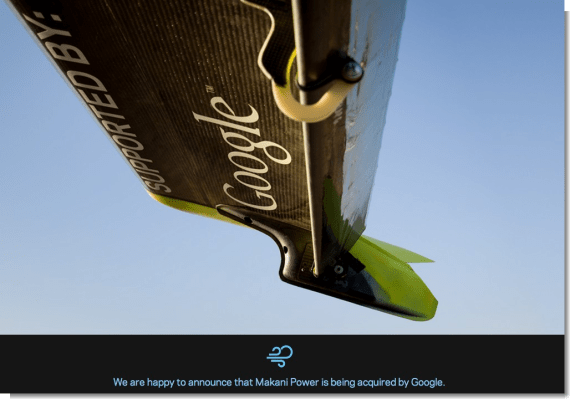 Some quick history: Makani’s creators several years ago came up with the idea of essentially combining kites with wind turbines in order to capture the strong and steady wind energy high up in the sky — too high for conventional wind turbines to capture.

“The secret to the air turbine design lies in using a fraction of the material necessary for a standard wind turbine. A conventional 1-megawatt wind turbine can weigh more than 100 tons, but Makani’s airborne turbine only uses a carbon-fiber wing and lightweight rotors of their own creation,” Silvio wrote back in 2011. “The company says its 1-megawatt airborne turbine system will weigh a tenth as much and have an installed price half a normal turbine, but with the same rated power.”

“We expect the cost to be around 3 cents a kilowatt-hour,” said Corwin Hardham, Makani CEO. “That’s getting lower than a lot of coal-fired generation at the moment.”

Makani Power has received a number of awards and grants over the years, including a $3 million dollar grant from the Department of Energy’s ARPA-E program, and $20 million in venture capital funding from Google.

Google’s purchase: Apparently, Google liked what it saw. And a critical development unveiled last week probably didn’t hurt. From the Makani Power website: “This formalizes a long and productive relationship between our two companies, and will provide Makani with the resources to accelerate our work to make wind energy cost competitive with fossil fuels. The timing couldn’t be better, as we completed the first ever autonomous all-modes flight with our Wing 7 prototype last week.”

“They’ve turned a technology that today involves hundreds of tons of steel and precious open space into a problem that can be solved with really intelligent software,” Google X Director Astro Teller said. ”We’re looking forward to bringing them into Google.”

What is Google[x]? Well, you won’t find a Google website about it (at least, I didn’t). But it is reportedly, “a secret facility run by Google thought to be located somewhere in the Bay Area of Northern California,” according to Wikipedia. ”Work at the lab is overseen by Sergey Brin, one of Google’s co-founders.” About 100 potentially groundbreaking projects are reportedly in some process of development there. Google’s driverless car technology (which I happened to get some video of last year, as well as pics, while on a short trip to the Bay Area) and Project Glass are probably the two most well known projects in Google[x].

We’ll see where Makani’s (er, Google’s) wind turbine kites goes next. Hopefully they do hit those 2015 commercialization and 3 cents per kilowatt-hour targets.

For now, here are a few videos highlighting the innovative, kite-like wind turbines:

The Makani Airborne Wind Turbine from Energy NOW on Vimeo.

Google Buys Makani Wind Power (Kite Power Company) was originally published on: CleanTechnica. To read more from CleanTechnica, join over 30,000 others and subscribe to our free RSS feed, follow us on Facebook (also free!), follow us on Twitter, or just visit our homepage (yep, free).