Peter Lang is a retired geologist and engineer with 32 years’ experience on a wide range of energy projects throughout the world, including managing energy R&D and providing policy advice for... 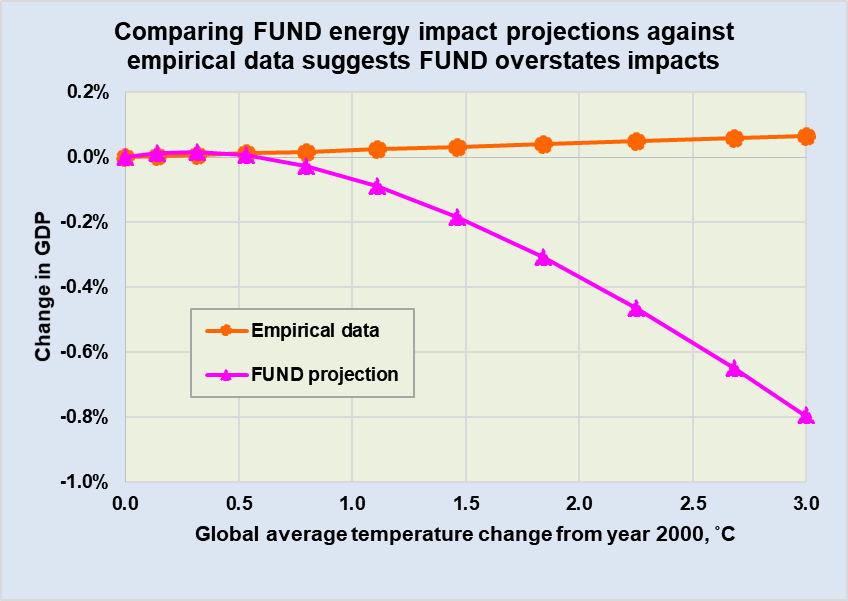 Abstract: This paper tests the validity of the FUND model’s energy impact functions, and the hypothesis that global warming of 2 °C or more above pre-industrial times would negatively impact the global economy. Empirical data of energy expenditure and average temperatures of the US states and census divisions are compared with projections using the energy impact functions with non-temperature drivers held constant at their 2010 values. The empirical data indicates that energy expenditure decreases as temperatures increase, suggesting that global warming, by itself, may reduce US energy expenditure and thereby have a positive impact on US economic growth. These findings are then compared with FUND energy impact projections for the world at 3 °C of global warming from 2000. The comparisons suggest that warming, by itself, may reduce global energy consumption. If these findings are correct, and if FUND projections for the non-energy impact sectors are valid, 3 °C of global warming from 2000 would increase global economic growth. In this case, the hypothesis is false and policies to reduce global warming are detrimental to the global economy. We recommend the FUND energy impact functions be modified and recalibrated against best available empirical data. Our analysis and conclusions warrant further investigation.

Excerpts from the paper:

The figure below plots the projected global economic impacts by sector as a function of global average temperature change from 2000 to 2100. The total of all impact sectors, and the total excluding energy, are also shown. 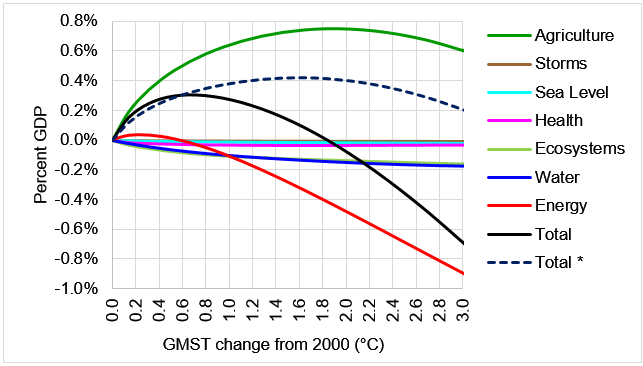 With energy impacts excluded, FUND projects the global impacts to be +0.2% of GDP at 3 °C GMST increase from year 2000. The conclusion that 3 °C of global warming may be beneficial for the global economy depends, in part, on the total of the non-energy impact projections being correct, or more positive. Whether this is the case needs to be tested.

This study tests the validity of the FUND energy impact functions by comparing the projections against empirical space heating and space cooling energy data and temperature data for the USA. Non-temperature drivers are held constant at their 2010 values for comparison with the empirical data. The impact functions are tested at 0° to 3 °C of global warming from 2000.

The analysis finds that, contrary to the FUND projections, global warming of 3 °C relative to 2000 would reduce US energy expenditure and, therefore, would have a positive impact on US economic growth. FUND projects the economic impact to be -0.80% of GDP, whereas our analysis of the EIA data indicates the impact would be +0.07% of GDP. We infer that the impact of global warming on energy consumption may be positive for the regions that produced 82% of the world’s GDP in 2010 and, by inference, may be positive for the global economy.

The significance of the paper's findings for climate policy is substantial. If the FUND sectoral economic impact projections, other than energy, are correct, and the projected economic impact of energy should actually be near zero or positive rather than negative, then global warming of up to around 3 °C relative to 2000, and 4 °C relative to pre-industrial times, would be economically beneficial, not detrimental.

[We encourage readers to read the full paper.]

It looks like this is suggesting that increasing global temperatures will be beneficial for global agricultural practices-- can you explain how that why that would be the case? While it may help with growing conditions for certain plants in new areas, the wider impacts of climate change are likely to be detrimental to crop yields:

Higher CO2 levels can affect crop yields. Some laboratory experiments suggest that elevated CO2 levels can increase plant growth.  However, other factors, such as changing temperatures, ozone, and water and nutrient constraints, may counteract these potential increases in yield. For example, if temperature exceeds a crop's optimal level, if sufficient water and nutrients are not available, yield increases may be reduced or reversed. Elevated CO2 has been associated with reduced protein and nitrogen content in alfalfa and soybean plants, resulting in a loss of quality.  Reduced grain and forage quality can reduce the ability of pasture and rangeland to support grazing livestock.[1]

More extreme temperature and precipitation can prevent crops from growing. Extreme events, especially floods and droughts, can harm crops and reduce yields. For example, in 2010 and 2012, high nighttime temperatures affected corn yields across the U.S. Corn Belt, and premature budding due to a warm winter caused $220 million in losses of Michigan cherries in 2012.[1]

Dealing with drought could become a challenge in areas where rising summer temperatures cause soils to become drier. Although increased irrigation might be possible in some places, in other places water supplies may also be reduced, leaving less water available for irrigation when more is needed.

Many weeds, pests, and fungi thrive under warmer temperatures, wetter climates, and increased CO2 levels. Currently, U.S. farmers spend more than $11 billion per year to fight weeds, which compete with crops for light, water, and nutrients.[1] The ranges and distribution of weeds and pests are likely to increase with climate change. This could cause new problems for farmers' crops previously unexposed to these species.

Though rising CO2 can stimulate plant growth, it also reduces the nutritional value of most food crops. Rising levels of atmospheric carbon dioxide reduce the concentrations of protein and essential minerals in most plant species, including wheat, soybeans, and rice. This direct effect of rising CO2 on the nutritional value of crops represents a potential threat to human health. Human health is also threatened by increased pesticide use due to increased pest pressures and reductions in the efficacy of pesticides.[3]

Matt, thank you for your question.

"The conclusion that 3 °C of global warming may be beneficial for the global economy depends, in part, on the total of the non-energy impact projections being correct, or more positive. Whether this is the case needs to be tested."