Global climate targets can only be achieved through negative emissions?

If we look back on the past year, the coronavirus pandemic in particular will be remembered. In the public perception, the pandemic and its effects seem to have displaced climate change as the greatest challenge.

Global energy-related CO 2 emissions fell by around 6 percent in 2020 compared to 2019. In particular, due to the lockdown restrictions and the economic crisis, energy-related emissions fell by more than 2 gigatons (Gt) to a good 30 Gt in 2020. Nobody expected a decrease in emissions at the beginning of 2020. In fact, some countries, such as Germany, only achieved their climate goals because of the coronavirus crisis. Otherwise emissions would hardly have fallen as much.

However, a look at current figures and statistics reveals that energy-related CO 2 emissions have been back to the previous year's level since December 2020 and could only be 1 percent below the pre-corona emissions of 2019 in 2021 .

Even after strong reductions in emissions in the coming decades in all economic sectors through the expansion of renewable energies, the increase in energy efficiency and the reduction in energy consumption, residual emissions may still occur. Greenhouse gases must then be actively removed from the atmosphere in order to further reduce emissions in the balance sheet.

A country or organization achieves net zero emissions or climate neutrality when the amount of emissions removed equals that of the remaining emissions. This means that on balance sheet no more greenhouse gases get into the atmosphere. The amounts removed from the atmosphere are also known as negative emissions. There are various technologies and solutions for negative emissions, most of which today focus on removing CO 2 - the main greenhouse gas - from the atmosphere. Hence these solutions are also known as carbon removal.

However, a distinction must be made between carbon removal, carbon capture and storage (CCS) and carbon capture and use (carbon capture and use or utilization: CCU). CCS prevents fossil fuel emissions from getting into the atmosphere in the first place. However, CCS does not remove any emissions from the atmosphere. As such, it is not a negative emissions technology or solution. CCU refers to the use of captured CO 2 in the manufacture of fuels or other products. Whether or not a specific CCU process and product actually leads to negative emissions depends on where the captured CO 2 comes fromand how long the life of the product in question is. Figure 1 (source: cr.hub ) explains the difference between carbon removal, CCU and CCS.

The right terminology is therefore extremely important if credible net-zero targets or climate strategies are to be set and actually achieved. Likewise, these terms must be clearly defined when evaluating net zero targets or scenarios.

Due to the large number of global climate scenarios, we will only focus on a few here. Figure 2 (source: cr.hub ) shows an exemplary emission path for achieving the 1.5 ° C target. Traditional technologies for reducing emissions, such as renewable energies and energy efficiency, as well as carbon removal are presented separately here. The figure is based on the data of the climate scenarios of the Network for Greening the Financial System (NGFS) for central banks and supervisory authorities. 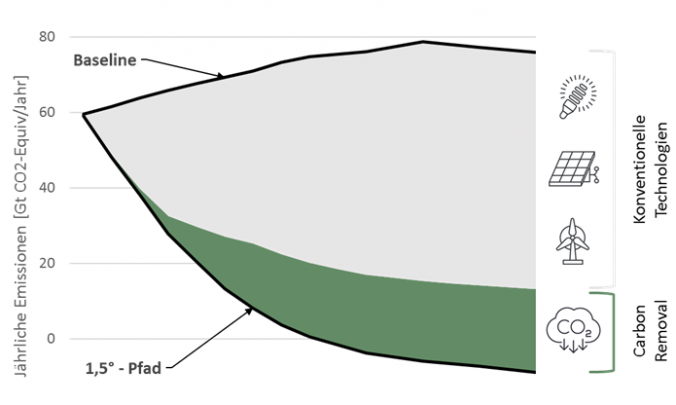 Figure 2: Necessary order of magnitude for carbon removal for an emission path for 1.5 ° C (source: cr.hub).

In order to keep the scope of this analysis as broad as possible, and not just look in one direction, we consider scenarios and calculations from five different organizations:

The Net Zero by 2050 Roadmap of the International Energy Agency (IEA), the consultation paper Reaching climate objectives: the role of carbon dioxide removals of the Energy Transitions Commission (ETC), the Special report: Global warming of 1.5 ° C of the Intergovernmental Panel on Climate Change (IPCC) and McKinsey’s Climate math: What a 1.5-degree pathway would take and the NGFS climate scenarios . Some information on the required negative emissions was taken from the report The case for Negative Emissions by the Coalition for Negative Emissionsdistilled. We at cr.hub are aware that this selection only represents part of the available literature.

All the scenarios considered aim to keep the temperature rise below 1.5 ° C compared to the pre-industrial level. Nevertheless, the comparison is difficult, as there are different assumptions about which part of the economy and thus which emissions flow into the scenario or what exactly counts as negative emissions and what is not. In addition, the probabilities of maintaining a certain temperature threshold differ between the scenarios and studies.

This means that the assumptions for the modeling and scenarios for Net Zero should be shown as clearly as possible in order to be able to classify and understand the results as best as possible.

What do the scenarios have in common?

Emission reductions through the widespread use of renewable energies and the electrification of large parts of the industrial and transport sector are included in all scenarios. Nevertheless, all scenarios agree that there is a considerable need for negative emissions in the gigatonnes range (Gt CO 2 e) in order to achieve the 1.5 ° C climate target, as Figure 3 (source: cr.hub ) shows ( Data sources: Coalition for Negative Emissions , IEA , ETC ). 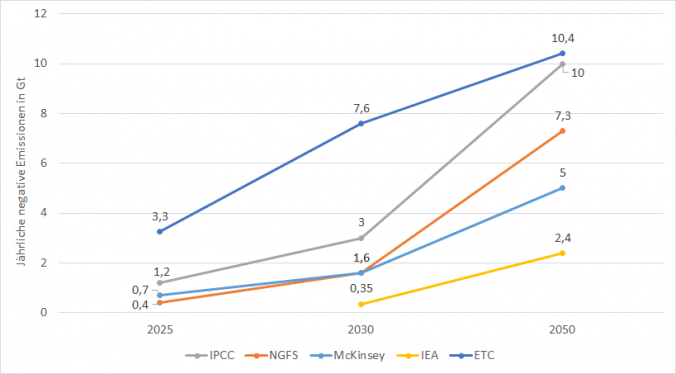 In addition, technologies for removing CO 2 from the atmosphere must be available on a large scale by this decade and reach the Gt level from a very low level today by around 2030. Given today's greenhouse gas emissions of almost 50 Gt per year, the level of negative emissions according to the five scenarios in 2050 will amount to around 5 to 20 percent of current global emissions. This is a clear indication that negative emission technologies are not marginal applications on the way to net zero emissions, but an important prerequisite for dealing with the remaining emissions in the sectors that are difficult to decarbonise.

Where do the numbers disagree and why?

At the upper end are the high numbers of the ETC and the IPCC with up to 10 Gt of negative emissions by the middle of the century, while the IEA's Net Zero Roadmap is at the lower end with an expected demand of 2.4 Gt by 2050. The IEA provides for a total separation of 7.6 Gt including CCS and CCU. However, originally negative emissions only make up about 30 percent of them. The scenario assumptions of the IEA do not include any new investments in coal-fired power plants without CCS and in new oil and gas fields or coal mines from 2021, as well as the phase-out of coal-fired power without CCS worldwide by 2030. The level of ambition for classic emission reductions is very high compared to the other four scenarios high.

If a medium path as in the NGFS or McKinsey scenarios is taken seriously, then negative emission technologies (NETs) will have to be scaled up quickly in the coming decades in order to get into the Gt range. According to the report The case for Negative Emissions , a scaling of at least 50 times compared to the current level is required. Especially since the current pipeline of carbon removal projects including nature-based solutions, bioenergy with CCS and direct air capture is only around 0.15 Gt by 2025 (source: Coalition for Negative Emissions ).

An example of how increased climate ambitions require negative emissions is the case of the new German Climate Protection Act. We will also publish an analysis on this soon.

Achieving net zero emissions by 2050 while limiting global temperatures to below 1.5 ° C requires unprecedented efforts and seems unlikely to be achieved without large-scale exploitation of negative emissions. In fact, many 2-degree paths are dependent on negative emissions, albeit at a lower level. This is especially true if international climate protection measures remain at today's level and are not tightened (source: Minx, et al ., Fuss et al. ).

Political decision-makers now have to ask themselves the following questions:

At the EU level, the first initiatives to support carbon removal, such as the Negative Emissions Platform, are on the way. The European Commission wants to propose a robust certification system for carbon removal by 2023. In addition, research and innovation on carbon removal and CCS are funded by Horizon 2020 and the successor program Horizon Europe. The Innovation Fund, which receives 10 billion euros from the revenues of the EU emissions trading system, also includes funding for commercial demonstration projects for low-carbon technologies such as CCS and NETs.

All solutions are needed to combat climate change, from emissions savings and reductions to the removal of greenhouse gases from the atmosphere. For a process or technology to be considered carbon removal, four conditions must be met:

However, some of the scaling and application of the various nature-based and technological solutions for carbon removal are still in their infancy. Figure 4 (source: cr.hub ) shows selected negative emission technologies .

How is the industry preparing?

For the private sector, especially for corporations and companies that set themselves climate goals and strive for their own net zero goals, the complexity of the discussion increases. Internationally recognized standards for setting climate targets and the role of mitigation and removal, such as the Net Zero Standard of the Science Based Targets Initiative, will be of great importance (source: SBTi ).

Industry-led voluntary carbon market initiatives such as the Task Force for Scaling Voluntary Carbon Markets (TSVCM) are also needed to drive demand and market growth. Cr.hub is part of the TSVCM consultation group, which recently published its report on the second phase of the implementation of a voluntary global CO 2-Market has published. In order to achieve real benefits for the climate, however, it is important that only high-quality certificates for abatement and carbon removal are taken into account in both private and voluntary, as well as government initiatives. The discussion about what constitutes high-quality carbon removal credits and solutions is leading too far here. However, Cr.hub will shed light on this topic in further articles.

In summary, it is clear that many actors and organizations take carbon removal and negative emissions seriously in their climate and energy scenarios as a potential instrument for achieving net zero targets. Furthermore, NETs have to be scaled heavily in order to achieve the necessary size.