The year 2022 starts with the preparation of some changes in the law. On the one hand, the federal government wants to adopt a legislative package to achieve the expansion paths for renewable energies, on the other hand, the EU taxonomy is currently being discussed. A reform of the law regarding the termination of electricity contracts is being planned.

At the opening balance sheet of the Ministry for Climate Protection on January 11, 2022, the Federal Minister for Economic Affairs, Robert Habeck, introduced his speech as follows: “We are starting with a drastic backlog. The previous climate protection measures are insufficient in all sectors. It is foreseeable that the climate targets for the years 2022 and 2023 will be missed”. A number of measures are therefore necessary to counteract this. Figure 1 shows the necessary expansion paths for wind and PV. The first legislative package is to be passed in the cabinet in April (source: BMWI ). 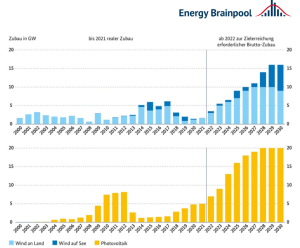 The Federal Ministry of Economics and Climate would like to implement these immediate measures in a timely manner (source: BMWI ):

Divided opinions on the EU taxonomy

On December 31, 2021, the EU Commission presented a concept that will classify natural gas and nuclear energy as sustainable investments in the EU taxonomy. This ensures that investors can now start from the same basis when investing in environmentally friendly projects (source: EU Commission ).

The 27 EU member states initially had until January 12th, after an extension until January 21st, to react to the draft and to comment. While Germany says a clear "no" to nuclear power, opinion on gas is divided. The federal government describes it as a "bridging technology", which is the right way to reduce CO 2 emissions and make it possible to phase out coal under certain conditions. Numerous climate protection organizations in Germany appealed to the coalition to classify both energy sources as not environmentally friendly, since they are sending the wrong signals and threatening the energy transition (source: tagesschau ).

As it is a delegated act, it will enter into force automatically without objection. This means that either the EU Parliament or the Council of Ministers, the body of the member states, have to object within four to six months. This is currently quite unrealistic, since 20 out of 27 governments would have to vote against the draft. Eleven European countries, including France and Poland, support the EU Commission's draft. A failure in the EU Parliament is not to be expected (source: energate-messenger ).

Read more on this topic in the blog post Nuclear and natural gas in the EU taxonomy: what is it about? “.

Reform of the law to protect electricity customers is being planned

The federal government is currently planning a legal reform of the Energy Industry Act to protect consumers from short-term terminations of electricity and gas contracts by "cheap providers". As can be seen in Figure 2, the price of electricity in 2021 rose particularly towards the end of the year and is currently 40.46 ct/kWh. As a result of the rise in electricity prices, some low-cost suppliers have had to cancel thousands of contracts because they have aligned their contracts with speculation about low prices on the electricity exchange. Thus, the terminated electricity and gas customers have fallen into the basic supply, which is a lot more expensive than a regular contract. The legal reform is intended to protect consumers with clear notice periods and to better regulate the basic service (source: Handelsblatt).

In addition to a longer notice period, the Federal Ministry of Economics is planning a uniform tariff for the basic service. New customers should pay more than existing customers. According to a study by the Federal Consumer Association (VZBV), new customers currently have to pay between 889 and 1654 euros more per year (source: Handelsblatt ). 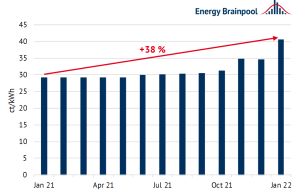 Figure 2: Average electricity price for an annual consumption of 4,000 kWh in ct/kWh (source: Energy Brainpool according to the Verivox consumer price index, 2022 [2] )

Mixed movements in the gas market

After being on a downtrend late last year, gas prices recovered earlier this month. Due to an improved LNG supply, however, the price collapsed shortly afterwards. LNG withdrawals mark a new all-time high this week at almost 4,400 GWh/day (previous month 2,500 GWh/day). The extremely high LNG supply is relaxing the gas trading markets somewhat. However, the impending supply disruptions due to the border conflict between Ukraine and Russia are boosting the gas price, which is on an upward trend (source: Montel ).

Brent crude oil prices hit their highest level in three years. One reason for this is, among other things, that the omicron variant has milder effects than previously feared. The front month traded at around USD 90/bbl, roughly at pre-pandemic levels (Source: Montel ). 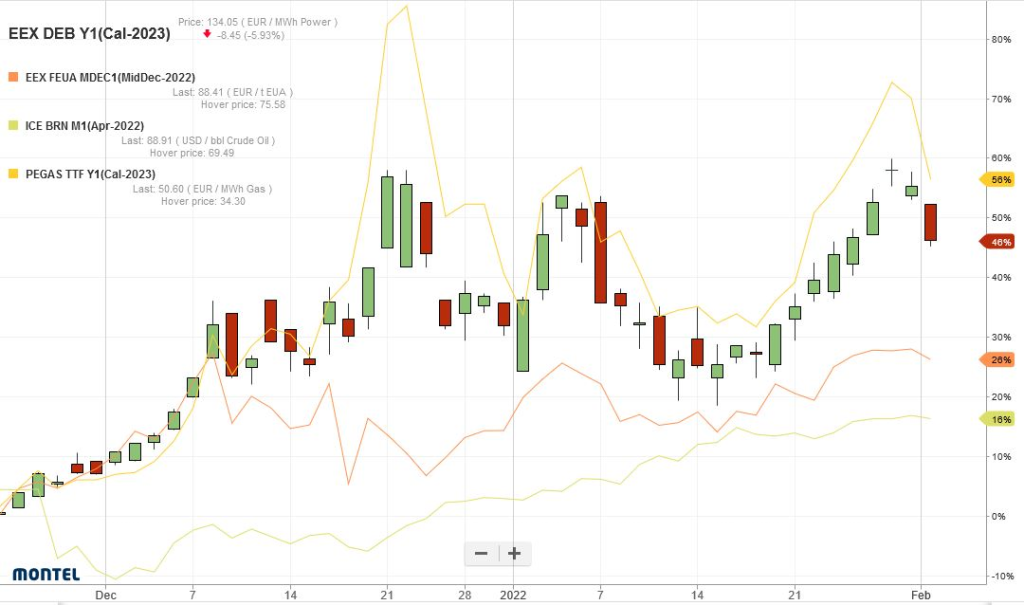 Figure 3: Percentage price development of the German electricity front year (candle sticks), the CO 2 certificates with delivery in December 2022 (orange line), the gas front year at the TTF (red line) and the coal front year (green line) from the end of December 2021 to the beginning February 2022 (Source: Montel, 2022 [3] )

Few hours of sunshine, but lots of wind

The share of renewable energies was higher in January 2022 at an average of 45 percent compared to the previous year (37 percent). Rather milder temperatures and windier weather are predicted for the remainder of the winter, which should ease the pressure on gas prices (source: Montel ). There was little solar feed-in throughout the month, so solar energy was at its lowest level in January at 0.84 TWh. The wind feed-in fluctuated strongly over the month. It ranged between 1.44 GW and 43.47 GW. In general, the wind feed-in was at a high level of 12.34 TWh and roughly corresponds to the wind feed-in of the past few months (source: Energy Charts ).

€0.40 for a single kWh of electricity, and more increases to come, I'll bet many less well-off Germans are feeling the cold this winter because they cannot afford to heat their homes. The German energy policy is being paid for by the consumer and in the future the tax payer also.  Nuclear becomes more attractive with each increase.

That’s getting pretty close, I believe, to the cost for CCS. Indeed, some CCS projects are in advanced planning stages.