In the tenders for offshore wind energy, the electricity generated is marketed without subsidies from the EEG subsidy. The new federal government will set the course for German climate policy. Preparations for the start of national emissions trading are in full swing. New record prices for gas & co. Were reached on the short-term and futures markets.

On September 9, 2021, the Federal Network Agency announced the results of the first tenders for offshore wind energy with a previously investigated area. Since this year, the bidding date has always been on September 1st. The wind farms that have been awarded are to go into operation from 2026. The tender volume is based on the area development plan. The award gives you the right to a grid connection and the right to operate the offshore wind farm for 25 years (source: BNetzA ).

This year, three areas with a total volume of 958 MW were tendered. Two areas (N-3.7 and N-3.8) are in the North Sea, one area in the Baltic Sea (O-1.3). RWE Renewables Offshore Development Two GmbH was awarded the contract for the area N-3.7 (225 MW). EDF Offshore has been awarded the contract for the area N-3.8 (433 MW). The contract for the area O-1.3 went to RWE Renewables Offshore Development One GmbH (300 MW). The award value on all three areas is 0 ct / kWh, ie the bidders want to market the electricity generated without money from the EEG subsidy and at the same time make clear the great interest shown by the applicants. In two cases the decision was made by drawing lots because several applicants had submitted zero-cent offers (source: BWO ).

The outcome of the federal elections sets the course for climate policy in Germany. Exploratory talks are currently taking place, and the Greens and the FDP in particular have quite different views. While the FDP advocates the digitization of the energy transition, the Greens see state regulations as the right solution (source: DNR ). But important common goals can also be found. Both parties want to streamline the approval process in order to expand the construction of solar and wind parks more quickly. It is important to them to increase the recycling rate and further promote the circular economy. They advocate renaturation of the moors as CO 2-Storage. Both the FDP and the Greens rely on clever CO 2 pricing when it comes to climate policy . When it comes to traffic and mobility, both parties agree that the charging station infrastructure needs to be expanded for more electromobility. From 2030, the Greens only want to allow new emission-free cars. The FDP rules that out completely. Opinions also differ on the issue of climate neutrality from 2050 onwards. The FDP does not want to achieve climate neutrality until 2050, while the Greens are aiming for the beginning of 2040 (source: DW ).

Preparations for the introduction of the national emissions trading system (nETS) were well underway through September. Sales started on October 5, 2021 (source: EEX ).

The EU ETS and the nEHS both work according to the “cap and trade” principle. The main difference is that the EU ETS is a “downstream” emissions trade. The nEHS, on the other hand, works according to the “upstream” principle. This means that those who emit CO 2 have to pay for the EU ETS . At the nEHS, participants have to acquire certificates that put the fuels on the market. This means companies that sell or supply fossil fuels. All fuels that emit CO 2 emissions during combustion are included. This also includes biomass. The heating and transport sectors, which generate a large amount of CO 2-Have reduction potential. As Figure 1 shows, the nEHS starts with a fixed price from 2021 to 2025. During this period, the prices for the certificates for the respective years have already been set. From 2026, the CO 2 prices will be determined within a price corridor. The minimum price is EUR 55 / t CO 2 and the maximum price is EUR 65 / t CO 2 (source: DEHSt ). 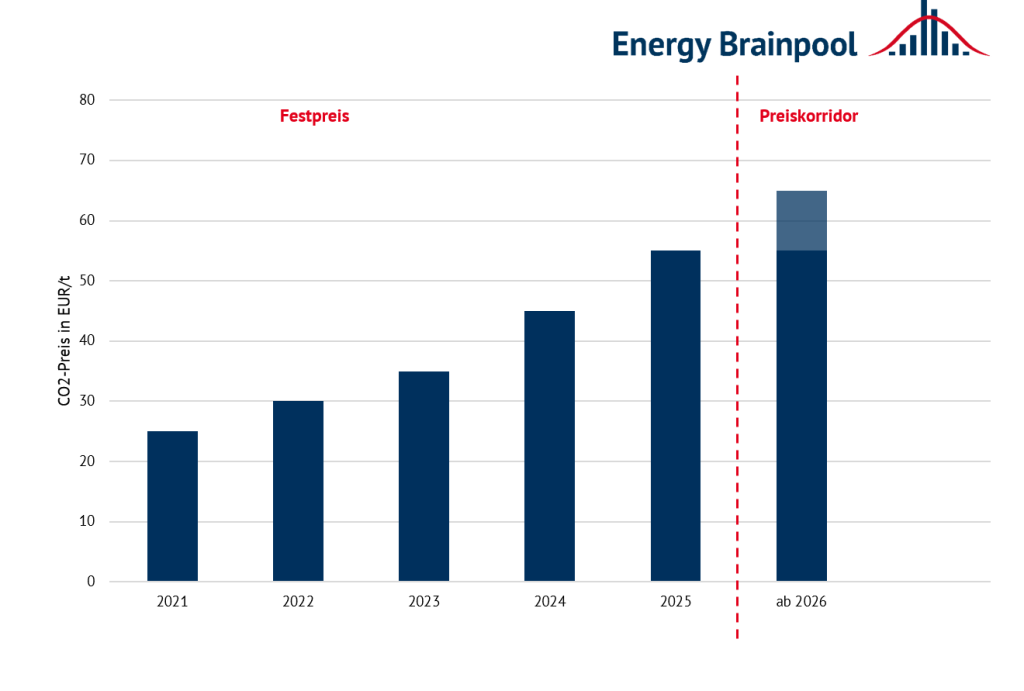 The prices for electricity, gas and coal are trading at multi-year highs. This is due to the rapidly increasing demand due to the expected below-average low temperatures. Figure 2 (source: Montel ) shows that the gas price in particular experienced a steep development in September due to the low storage level. The prices were at their peak. The front month traded above EUR 85 / MWh. The front year reached a record high of just over 60 EUR / MWh (source: Montel ).
The price of coal has risen to a 13-year high and the front year traded at $ 144.50 / t. The extremely high price is supported by low temperature forecasts, a low spot supply and a low gas supply. The low levels of gas storage tanks increase the profit margins of coal-fired power plants noticeably (source: Montel ).
The rise in gas prices and a general bullish mood also resulted in new all-time highs on the electricity market. The Cal 22 Base reached EUR 129.44 / MWh and there is no end in sight. The CO 2 price decoupled from the exploding gas and electricity prices at an early stage and hovered around 60 EUR / t CO 2. At the end of the month, the EUA lead contract nevertheless reached a new all-time high of 65.77 EUR / t CO 2 (source: energate-messenger ).

At 41 percent, the share of renewable energies in electricity generation was both significantly below the previous month and below the annual average of 47 percent. Towards the end of the month, high wind feed-in was announced, which is common for this time of the year.

In addition to the records on the futures market, there were also new price peaks on the short-term markets. The gas price on the day-ahead market has risen to over EUR 65 / MWh (source: Montel ). The electricity price on the day-ahead market climbed to 130.23 EUR / MWh at the end of the month and thus to a new all-time high (source: energate-messenger ). Figure 3 (source: Energy Charts ) shows electricity generation and consumption in September 2021. 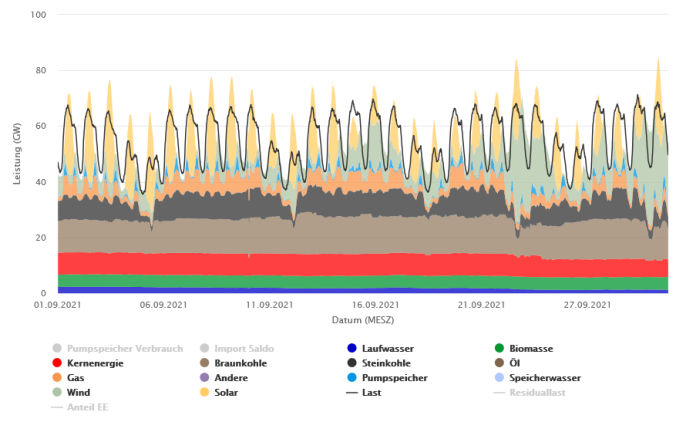