On 20 September 2019, the Climate Cabinet presented the Climate Protection Programme 2030 (source: Federal Government). In a three-part series, we examined the German government’s climate package in detail. In conclusion, the package is not sufficient to meet the climate and energy challenges until 2030. Instead, it follows the path of least resistance.

Above all, the CO2-price in the heating and transport sectors until 2025 is too low to encourage a switch to CO2-saving technologies. Figure 1 shows the CO2-price of the climate package compared to the necessary prices according to science. 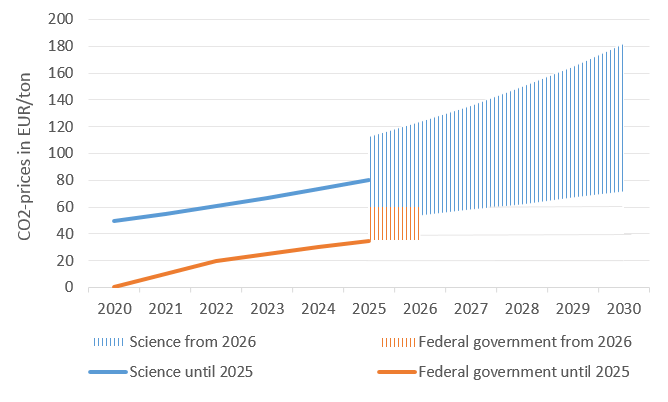 Figure 1: Additional CO2-pricing in the transport and heating sector according to Climate Package 2030 and scientific necessity (source: Energy Brainpool)

Thus, important six years to reduce Germany’s greenhouse gas emissions are being wasted. For many of the funding programmes of the Climate Protection Programme 2030 concrete details or funding sums are also not known to date.

On 25 September 2019, the Federal Cabinet unanimously adopted the climate package (source: PV Magazine). Several associations (source: vzbz) and the political opposition have strongly opposed the measures in the package. They see no red thread, but rather confusion and too many single support schemes (source: Erneuerbare Energien).

For a number of the 66 measures of the climate protection program new laws must be drafted and adopted. A quarter of the measures must be passed by the Federal Council and could be tightened up there (source: dena). Now, the hope of aligning parts of the package more strongly with climate protection lies in the coordination and negotiation phase of the individual measures.

Important measures for climate protection will not take effect until 2021. Meanwhile, the work in the political committees over the next few months and the pressure from society will show how and whether the proposals from September 2019 will actually determine German climate protection in its current form until 2030.

The mood in the German wind industry was gloomy when Minister of Economic Affairs Altmaier convened a national wind power summit on 5 September 2019. However, the reasons for the faltering expansion as well as the low participation in the tenders are well known: Approval procedures are too long, many wind parks face lawsuits and distance regulations limit the potential area available.

Trade associations and environmental organisations have published a 10-point-plan for the revitalisation of onshore wind energy development in the run-up to the wind power summit.

Mainly, the proposals focus on a new national strategy for the designation of land to wind parks. In detail, the strategy includes measures against outright distance rules from settlements, the possibility of repowering existing wind farms and the economic participation of municipalities. The latter serves the purpose to increase the local acceptance of the turbines (source: Windbranche).

In conclusion, the German government’s climate protection package took up some of the above points, albeit in a different way than the industry expected. A nationwide distance rule of 1000 metres from inhabited areas will apply soon. However, the federal states or municipalities can also reduce the distance by themselves. A concept on how municipalities can receive a financial share in the operation of the wind turbines is being under development.

Wind expansion until 2021 too low for renewable targets

For the onshore wind tender of 500 MW in September 2019, however, those proposals came too late. As in the August tender, the average tender value was the legal maximum. Of the 500 MW tendered, only 179 MW were awarded because there not enough projects were submitted. 64 percent of the tendered capacity was therefore not awarded (source: Federal Network Agency).

A revival of the expansion of German onshore wind power is not to be expected until 2021. All tenders have been undersubscribed since May 2018. Besides that an average implementation for new wind turbines endures 20 months. That means that the capacity of newly installed wind power in Germany might also be below 1500 MW in 2020. This is less than one third of the annual capacity of 4500 to 5000 MW needed to be installed in order to achieve the target of 65 percent share of renewable energies in electricity consumption in 2030 (source: Montel).

Unlike the climate protection programme of 2030, which has not won widespread support, E.ON  and RWE should be pleased about another political decision. The big German utilities E.ON and RWE decided to bundle their businesses in 2018. The Innogy part of RWE was to be transferred to the E.ON Group.

However, the transaction between the two energy giants also had to be notified to the EU antitrust authorities. Since January 2019, the exchange of company shares and business areas has been investigated by the EU authorities. An in-depth investigation was conducted to determine whether E.ON’s acquisition of Innogy would result in a too strong  position of the company in the sales and distribution of electricity and gas in many European countries (source: PV Magazine).

The conditions imposed by the antitrust authorities are relatively low. Many market participants, such as Lichtblick, the Association of Energy Market Innovators or Eurosolar criticise the merger of the business areas, as competition is likely to be prevented (source: PV Magazine).

Prices: up and down

In September 2019, commodity markets first moved upwards, while prices towards the end of the month were only slightly higher than at the beginning of the month. Electricity future prices rose by up to six per cent. This happend after concerns about the availability of French nuclear power plants during winter became known on 10 September (source: Montel).

Commodities received a further boost from attacks on Saudi Arabian oil infrastructure on 14 September. Crude oil prices rose by about 20 percent within one day, the highest jump in more than three decades. The front month of Brent rose to over 67 USD/barrel (source: Montel).

Figure 2 shows the price development of base-load electricity for the year 2020 in Germany during September 2019, which rose to over 50 EUR/MWh. Obviously, prices fell towards the end of the month, when fears of oil supply diminished again and the prices of coal contracts also fell again.

Figure 2: Price development of the electricity front-year Base Germany in September 2019 (Source: Montel)

The improved profitability of gas-fired power plants continues to make it mark on the spot market. In September 2019, they produced about twice as much electricity as the German hard coal-fired power plants. Wind and solar feed-in accounted for more than one-third of the monthly generation.

Figure 3 shows the power generation of the various technologies and the day-ahead prices for September 2019. Prices reached the negative area during the last weekend of the month.

Some strategic and joined up thinking on a future hydrogen economy...’With regards to the technology and the famous 5 phases of a hype cycle, we have gone through the first four and are now at the final slope ready for the ‘plateau of..