The German Energy Market Review May 2020

Corona and the energy industry

In May 2020, initial restrictions due to the Covid-19 pandemic were relaxed again in some countries. This also has an impact on energy consumption. For example, some network operators, such as Westnetz, notice a trend towards a return to normality (source: Montel).

However, this does not necessarily mean that electricity demand will return to pre-pandemic levels. RWE expects electricity demand in Germany, the Benelux countries and the UK to fall by five to six percent this year (source: Montel).

There has also been a significant change in the timing of electricity demand, especially in peak periods. According to statements by traders, a clear base-peak demand curve can now only be seen on the three working days in the middle of the week.

On Mondays and Fridays, however, the demand for electricity is rather at the level of the weekend without a clear division of prices and demand into base and peak periods (source: Montel).

CO2-emissions have fallen sharply in the past two months due to the lockdown restrictions, while lower demand has depressed prices on the short-term electricity market. As a result, the EEG levy for the year 2021, which in short makes up the difference between market revenue and the level of support for renewable energies, could rise by one to two ct/kWh. This would cause the levy to rise from today’s 6.76 ct/kWh to up to 8.6 ct/kWh (source: Agora Energiewende).

What happened on the oil-market?

OPEC also expects a decline in demand of around 9 million barrels/day or just under 10 percent (source: Marketwatch). The IEA also predicts that investment in energy across all sectors, including renewable energies, will slump by 10 to 50 percent in 2020 (source: Montel, PV Magazine).

All this makes it clear that the impact of Corona on the energy industry is still drastic, despite the slightly more positive outlook.

However, not a single project with a wind turbine entered the tender. With an average tender price of 5.33 ct/kWh, this figure was 0.15 ct/kWh above the average value for the technology-specific solar tender in March 2020 (source: Erneuerbare Energien).

Figure 1 shows the tender results for PV since the beginning of 2019. The figure also shows the results of the cross-technology tenders in this period, as in all cases only PV projects were awarded. 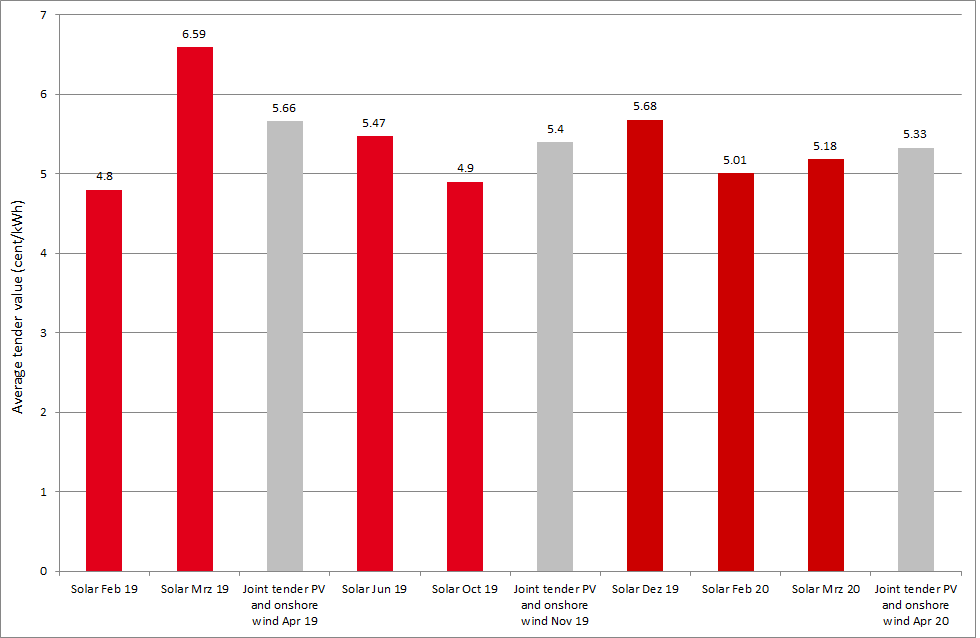 One would almost not have thought it possible any more. The federal government has agreed on a regulation for the minimum distances of wind turbines on land and for the abolition of the 52 GW expansion threshold for PV (source: PV Magazine).

It is now up to the federal states to decide whether to impose a minimum distance of 1000 meters between settlements and wind turbines (source: Solarserver). To this end, a clause opening the way for the states to do so is to be anchored in the building code. Existing stricter regulations, such as in Bavaria, are not affected by this new ruling.

On 15 May 2020, a mini-EEG (German Renewable-Energies-Act) amendment passed the German Bundesrat. This did not, however, include the above-mentioned resolutions, but above all removes the emission control privileges of citizen energy companies when they participate in tenders for onshore wind (source: PV Magazine).

There is a general call for a major amendment to the EEG. It particularly aims at including the removal of the 52 GW cap or even an increase in the expansion figures for renewable energies in order to achieve the energy and climate policy targets for 2030. A detailed timetable for this endeavour does not yet exist.

The Federal Cabinet has also approved the higher CO2-prices already set in December 2019 and the use of these revenues to reduce the EEG levy. National emissions trading will start in 2021 with a fixed CO2-price of 25 EUR/tonne and increase to 55 to 65 EUR/tonne by 2026. From 1 January 2021, the revenues from the sale of emission rights will be used to reduce the EEG levy (source: PV Magazine).

Since the beginning of the corona pandemic, the futures market has been subject to great uncertainty. The spread of the virus and, above all, reactions such as curfews and lockdowns in many countries ground the global economy to a standstill. Since mid-May 2020, however, some indicators have been pointing to slightly rising demand and prices, or at least to stability.

Oil prices have settled at a level of around 35 EUR/barrel. However, much of this price stability is due less to a return to normal demand than to the effectiveness of the production restrictions agreed by leading oil producers (source: Montel).

In the electricity market, rising CO2-prices at the end of May led to a 5-week high of over 22 EUR/tonne, while the price channel rather has its boundaries between 19 and 21 EUR/tonne (source: Montel). The front year contract for electricity in the German market area has developed similarly. It has risen by nine percent since mid-March and stood at just under 37 EUR/MWh at the end of May. The development for coal and gas alone is negative.

Figure 2: relative price development of the German electricity front year (candle sticks), CO2-certificates (orange), the Brent oil contract for December 2020 (red) and the front year for coal (green) from mid-March to the end of May 2020 (source: Montel)

However, electricity prices on the short-term market are at record lows. Compared to the previous year, German day-ahead prices have fallen by 42 percent and have averaged 23 EUR/MWh since the beginning of 2020 (source: Montel).

In May 2020, phases with low and high wind feed-in alternated in a weekly pattern. In contrast, PV generation was almost consistently at a high level. Generation in gas-fired power plants plays an ever more important role when compared to coal. Figure 3 shows electricity generation by technology and the day-ahead prices in the German electricity market in May 2020.

Figure 3: power generation and day-ahead prices in May 2020 in Germany (Source: Energy Brainpool)