In the case of PV, bids were submitted for a total of almost 450 MW, while the amount put out to tender was only 100 MW. More precisely, the average remuneration for PV was 5.27 ct/kWh in the June tender and rose slightly compared to the previous PV tenders in February and March 2020.

The tender for onshore wind energy was undersubscribed as it has been since the end of 2018 (source: Erneuerbare Energien). The projects submitted had a volume of almost 470 MW, while the volume tendered was 825 MW. However, the average remuneration for onshore wind remained relatively constant compared to previous tenders in 2020, reaching 6.14 ct/kWh.

Figure 1 shows the results of the tenders for PV and onshore wind since the beginning of 2020. In the joint tender of April 2020, the total capacity was awarded to PV installations. 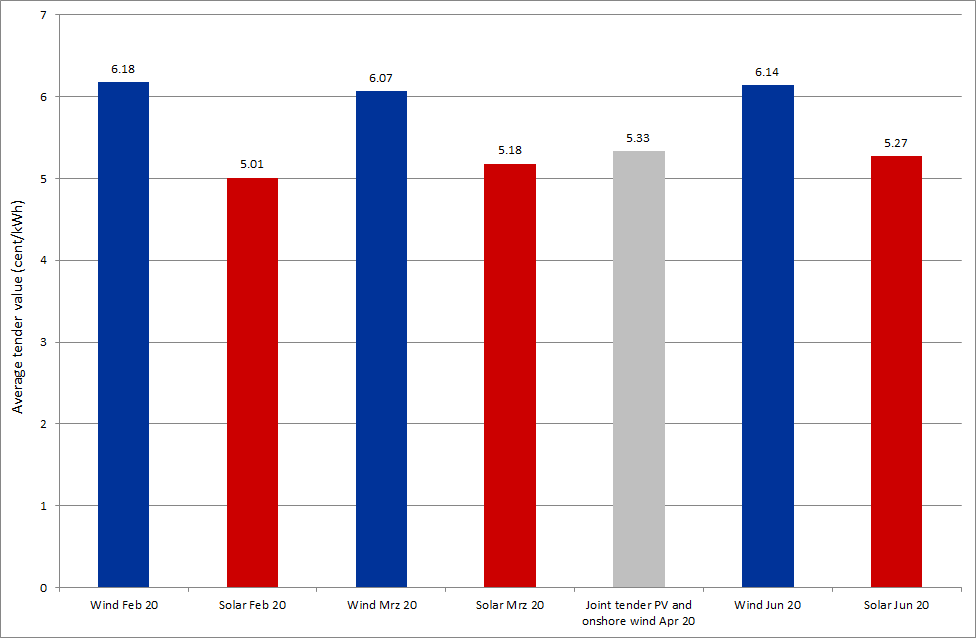 Electricity consumption in Europe remains below the norm. At the end of June, average consumption in ten selected countries was 8 percentage points below normal. However, this also represents a recovery in consumption from the low point at the end of March, when demand for electricity in the EU fell by 15 percent (source: Montel).

In any case, the corona pandemic has upended the energy market. Finally yet importantly, politicians also reacted and initiated a series of legal changes and innovations. In our article on the Corona economic stimulus package, some of the changes in the energy industry are described in detail. In summary: The offshore expansion targets have been raised, the EGG levy is being limited, e-mobility is being promoted more strongly and the hydrogen strategy is taking shape.

Other changes that became known during June 2020 are the final abolition of the PV cap, the adoption of the National Hydrogen Strategy (source: PV Magazine) and the changes to the draft law on the coal phase-out.

With the Building Energy Act, which was adopted by the Bundesrat on 3 July 2020, the paragraph on the PV cap will be deleted from the EEG. After a long period of to and fro, it is finally clear that PV systems up to 750 kW will continue to receive feed-in tariffs, even if the 52 GW mark of installed PV capacity will reached in Germany (source: PV Magazine).

On 3 July 2020, the two laws on the coal phase-out were also on the Bundestag’s agenda (source: PV Magazine). They were adopted in their current versions and have also been confirmed by the Federal Council (source: Montel).

June 2020 brought positive developments for commodity prices at the long end. Whether for coal, oil, electricity or CO2-certificates, prices rose everywhere. Only gas prices continue on their sideways trajectory.

The relaxation of corona restrictions in many countries is causing the prices of oil in particular to rise again. On June 5th, the important psychological limit of 40 USD/barrel was reached for Brent. Since then, the price of oil has hovered around this mark. There is still uncertainty on the traders´ sides about the further course of the pandemic and the possibility of a second outbreak dampens price expectations (source: Montel). The 10 percent drop in EU energy consumption this year predicted by the International Energy Agency also prevents a stronger increase (source: Montel).

At the same time, EUA prices under the European Emissions Trading Scheme rose again to over 25 EUR/tonne towards the end of June. Since the beginning of the month, the prices for CO2-certificates have thus risen by 4 EUR/tonne or around 20 percent. In this market environment, however, speculative buyers also seem to be driving the price (source: Montel).

With higher prices for CO2 as well as for coal, the German front year for base-load power also increased and exceeded the price of 40 EUR/MWh in the last week of June.

Figure 2 shows the relative price changes of oil, coal, electricity and CO2 from the beginning of May 2020 to the end of June 2020.

Figure 2: relative price development of the German power front year (candle sticks), CO2-certificates (orange), the Brent oil contract for December 2020 (red) and the front year for coal (green) from the beginning of May to the end of June 2020 (source: Montel)

A lot of gas in June

Gas, lignite, PV and wind each generated about 6 TWh of electricity in June 2020. Figure 3 shows the electricity generation from different technologies and the day-ahead prices in June 2020 for Germany.