The coal phase-out and the associated structural aid are now cast into two laws and were adopted at the beginning of July 2020. We examine the regulations on the coal phase-out in detail here. The overview: The phase-out of coal-fired power generation in Germany is to be completed by 2038 at the latest, while a total of up to EUR 40 billion will go to the affected regions as aid for structural change.

On 3 July 2020 the German Bundesrat approved the Building Energy Act (GEG). This marked the final completion of the merger of the Energy Saving Ordinance (EnEV), the Energy Saving Act (EnEG) and the Renewable Energies Heat Act (EEWärmeG) after three years of discussions and drafts. The new GEG is scheduled to come into force on 1 October 2020 and uniform regulations for the energy requirements of new and existing buildings will apply from then on.

In terms of content, however, the GEG is not a revolution. The requirements for energy-efficient refurbishment and new buildings are unchanged (former EnEV KfW 75 Standard) and standards have not been tightened. These requirements will not be reviewed until 2023. For this reason, according to environmental associations, the law falls short of its potential as well as of the climate and energy policy necessities (source: Erneuerbare Energien).

The law provides for a ban on the installation of oil heating systems from 2026 and also stipulates that gas and oil heating systems that have been in operation since 1991 may only be operated for 30 years. Anyone who replaces an old oil heating system with a more climate-friendly option will receive a replacement premium. An innovation clause also makes it possible to use renewable energies, heat pumps or low-temperature heating networks instead of relying solely on the insulation of a building. Another interesting aspect is that it is no longer necessary for each individual building to meet the energy requirements, but only for the entire neighborhood as a whole (source: Haufe).

First half of the year: renewables at over 50 percent

The semi-annual statistics of the German electricity sector show a high share of renewable energies. Their share of net electricity generation in the first half of 2020 was just under 56 percent (source: Fraunhofer ISE). Wind, solar and Co. accounted for almost exactly 50 percent of electricity consumption (source: Agora Energiewende). In both cases, the share was well above that of the previous year. The main reasons for this were the more than 10 percent higher generation from solar and wind power due to favorable weather conditions, as well as the decline in demand for electricity due to the corona pandemic.

In the first six months of this year, renewable energy sources generated 136 TWh. This represents an increase of about 8 percent compared to the same period last year. Wind energy accounted for more than 30 percent, while coal feed-in now accounts for only 20 percent (source: Fraunhofer ISE). Figure 1 shows the generation of the various energy sources in the first half of 2020. 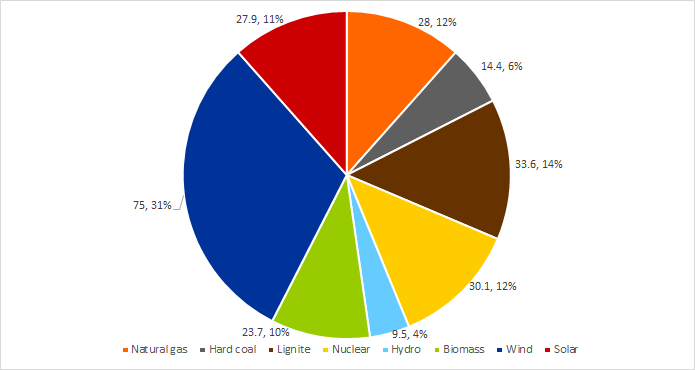 Figure 1: Generation in TWh and shares in percent of German net electricity generation from various technologies in the first half of 2020 (source: Energy Brainpool) 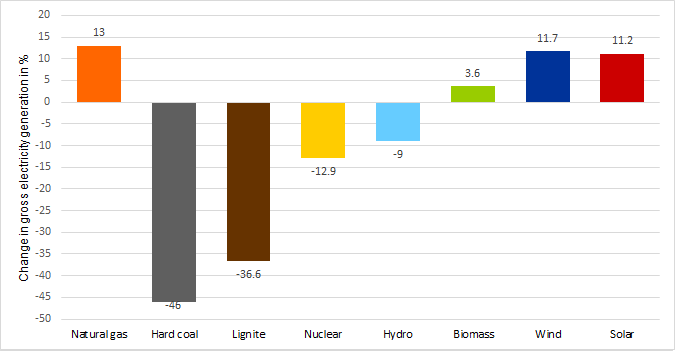 The high level of electricity generation from renewable energies, the low demand for electricity and the fuel switch from coal-fired to gas-fired power plants has led to a saving of 30 million tonnes of CO2 in the German electricity sector. Thus, the climate protection goal of 40 percent lower greenhouse gas emissions compared to 1990 will probably be achieved in 2020 (source: Agora Energiewende). However, it should be remembered that this is mainly due to special weather effects and the corona pandemic and less to successes in climate policy.

Not only Germany has adopted a hydrogen strategy. Also the EU Commission plans for far-reaching changes regarding this energy carrier. On 8 July 2020, the European Commission presented its hydrogen strategy and classifies gas as a decisive factor for the transition to a CO2-free economy. The EU expects investments of up to EUR 470 billion within the next 30 years. In addition, the demand for green and thus carbon-free hydrogen should require up to 120 GW of new wind and PV capacity (source: PV Magazine).

In the coming months the EU wants to define common standards for the production of hydrogen. According to the plan, there could be around 6 GW of new electrolyser capacity installed by 2024. In the five years from 2025 to 2030 a total of 40 GW of electrolyser capacity should then be installed. These plants should achieve the production target of up to 10 million tonnes of hydrogen per year (source: EU Commission).

This new branch of industry is to be promoted by the economic stimulus package “Next Generation EU”. For the electrolysers alone, an investment volume of EUR 24 to 42 billion is necessary. A further EUR 220 to 340 billion would be needed to expand the corresponding wind and PV capacities (source: PV Magazine). New technologies would also have to be applied in industry in order to be able to use carbon-free hydrogen. Here, too, the EU Commission expects that investments will have to go into the billions of euros.

With a better economic outlook and the EUR 750 billion EU rescue package, prices on the commodity markets also rose. Oil prices reached their highest levels in the last four months towards the end of July 2020. Prices for North Sea Brent rose to over 45 USD/barrel.

Prices also rose on the electricity side. The strong rise in CO2-certificate prices was the main price driver here. The EUA contract with delivery for December 2020 reached a 14-year high of over 30 EUR/tonne in mid-July. Subsequently, the price declined again towards the end of July due to profit-taking effects. The German electricity market contract for calendar year 2021 followed the swing in CO2-prices, as shown in Figure 3.

A lot of gas in July

The lower wind yields in July 2020 are reflected in the month’s electricity production. Electricity generation from wind power was below the norm in the middle two weeks of July, averaging only about 5 GW. The missing electricity volumes were largely supplied by gas and lignite-fired power plants, as Figure 4 shows.

The main reasons for this were the more than 10 percent higher generation from solar and wind power due to favorable weather conditions, as well as the decline in demand for electricity due to the corona pandemic.

You note that these are of course not long-term impacts, but do you think the German power sector will see any long-term influences from the pandemic? Are there any generation sites, for example, shutting down sooner than they would have otherwise? Is there any area of the industry that is 'winning' so to speak from the impacts of a strange year?

It does not seem that some generation sites shut down earlier now, even though that might still be happening in the coming months/years.
For now all coal-related generation waits for the compensation via the tenders and refunds from the coal exit law.

I think a clear winner this and probably also the coming years in Germany are renewables and solar in specific. For the industrial sector it is probably to early to conclude about long-lasting consumption changes etc.

Interesting about the incentive for coal plants to wait for tenders/refunds-- do you think those are attractive enough to even compel them to keep operating if they end up operating at a loss for the time being, which would be overcome by the amount of refunds they'd get from the exit law?

Yes the compensations are worth it especially given that you cannot just shut down the power plants as an operator whenever you wish.
You have to register the shut-down and still incur fixed costs due to personell and other obligations.

So waiting a few more months is worth it.

Also: Less plants on the market due to tenders and shut-down in the next years might again increase electricity prices (depending on many other things of course) and return some of the more efficient coal-plants back into profit.