All good things are worth waiting for. This old wisdom does not quite apply in the reality of the German coal phase-out. About a year ago, the results of the Coal Commission have been published. At that time, politicians promised to implement it on a one-for-one basis.

Now, some members of the Coal Commission are accusing the government of breaking its word. The planned shutdowns of coal-fired power plants are too late and will not be steady enough. Furthermore, the start-up of the new coal-fired power plant Datteln 4 is “a completely wrong signal” (source: Erneuerbare Energien). What exactly has the Commission decided in January 2020?

This month, the government negotiated the decommissioning path for the lignite-fired power plants with the operators of the power plants and opencast mines. However, only 2.8 GW of lignite capacity is now to be shut down by 2022, not 3 GW. As things stand at present, there would be no lignite closures at all between 2022 and 2025.

Another 5.7 GW are then to be taken off the grid by 2029. However, the second half of the capacity shutdown of lignite-fired power plants is not scheduled to take place until between 2034 and 2038 (source: Montel).

The late shutdowns would therefore cause more CO2-emissions. In the course of the phase-out, compensation amounting to 4.35 billion EUR is to flow to the affected operators of lignite-fired power plants (source: Erneuerbare Energien).

The first lignite-fired unit to leave the electricity market is RWE’s Niederaussem D (297 MW) in December 2020, with further power plants in the West German territory following until 2022, while the power plants in east German’s Lusatia region will not be taken off the grid until the end of the decade (source: Montel).

The commissioning of Datteln 4 is expected to increase CO2-emissions by 10 million tons compared to previous emission forecasts. In 2020, 4 GW of capacity will be tendered for shutdown, and in 2021 a further 1.5 GW.

The maximum compensation in 2020 is 165.000 EUR/MW and decreases by several tens of thousands of EUR/MW with each tender. In the 2026 tender, power plant operators will then only receive a maximum of 49,000 EUR/MW (source: Montel).

What is the next step?

On 29 January 2020, the government cabinet voted in favour of the Coal Phase-Out Act with the above-mentioned contents (source: PV Magazine). However, many environmental associations and members of the coal commission are up in arms against the regulations.

In particular, the higher carbon dioxide emissions caused by the later shutdown of lignite plants and the commissioning of Datteln 4, as well as the high phase-out compensations payments for the operators of the power plants are points of objection.

There will certainly be some more discussion in the run-up to the first tender for hard coal-fired power plants in June 2020.

PV tender: one in three bidders does not get their project through

In mid-January 2020, the German Federal Network Agency published the results of the PV tender of December 2019. With an average tender value of 5.68 ct/kWh, prices rose again compared to the two previous PV tenders. Figure 1 shows the tender results of all PV-only tenders in 2019. 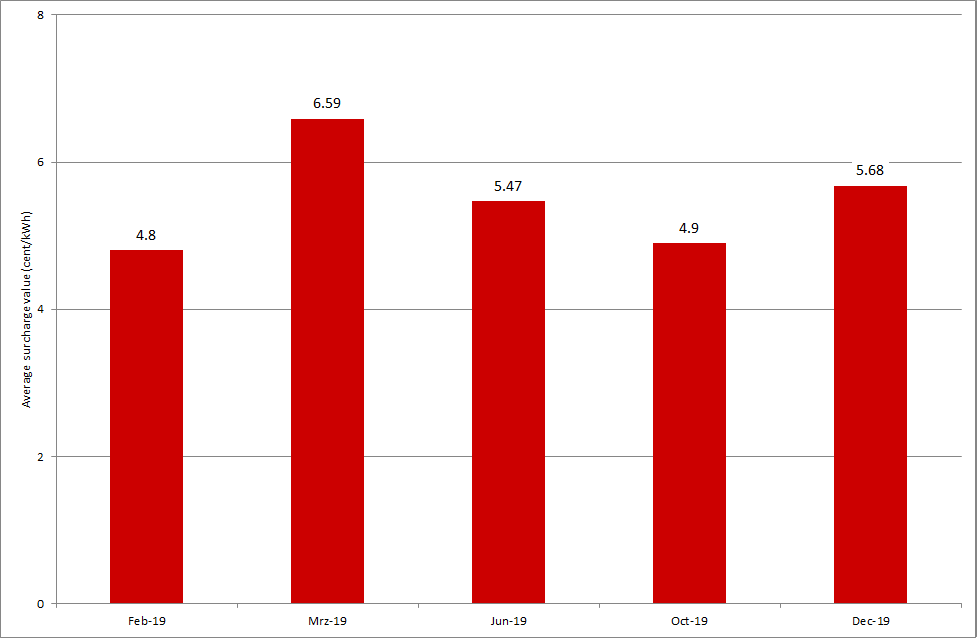 A total of 501 MW of new capacity was awarded, while 1344 MW of bids were submitted. As in all PV tenders, it was heavily oversubscribed. The solar industry is therefore demanding higher tender volumes (source: Erneuerbare Energien). However, the Federal Network Agency also had to exclude 76 of the 346 bids submitted, or 235 MW, due to formal errors.

German emissions of greenhouse gases fell by around 50 million tonnes and are now 35 per cent below 1990 levels. The reduction in emissions however, can be attributed solely to the electricity sector, while emissions from the transport and buildings sectors continued to rise (source: Erneuerbare Energien). Thus, higher CO2-prices as well as lower gas prices led to a displacement of German lignite and hard coal electricity. High feed-in of renewable energies did the rest.

However, in order to achieve the climate target from the Paris Agreement to limit warming to 1.5 degrees, EU emissions would have to fall much more sharply. According to the Federal Environment Agency, the EU is on track to emit about 25 billion tonnes of CO2 by 2030. The budget for the 1.5 degree target is only 30 billion tonnes by 2050. Either the emissions trading system has to be adjusted or the climate target will not be met (source: Montel).

At the long end, the trend since the beginning of the new decade has been mainly bearish. The price for the German front year 2021 fell in the course of January 2020 from around 45 EUR/MWh to below 41 EUR/MWh, a 19-month low (source: Montel).

Overall, the reasons for this are stagnating prices for EUAs of the European emissions trading system and a further decline in gas prices. The latter fell to as low as 15 EUR/MWh in January, while coal prices also fell by almost 10 percent to 60 USD/ton during January 2020. Figure 2 shows the relative price development of the German front year for base-load power, as well as CO2, gas and coal prices.

On the spot market, the fluctuating feed-in of wind energy in January 2020 made itself felt both in terms of price and in the generation structure. While electricity generation from wind was at a high level until 18 January, hard coal and gas-fired power plants subsequently filled the gap. This is particularly evident in Figure 3 between 20 and 26 January 2020. Accordingly, the price level was also higher during this period.