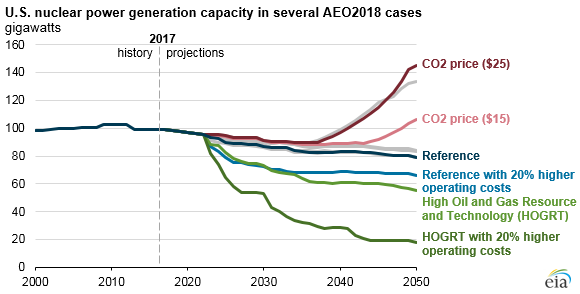 Currently, 60 nuclear power plants operate in the United States with a combined electricity generating capacity of 99 gigawatts (GW). Nine plants with a combined 11 GW of capacity have announced plans to retire by 2025. Based on assumptions in the AEO2018 Reference case, which reflects current laws and regulations, EIA expects additional unplanned retirements will reduce total U.S. nuclear generating capacity from 99 GW in 2017 to 79 GW by 2050. 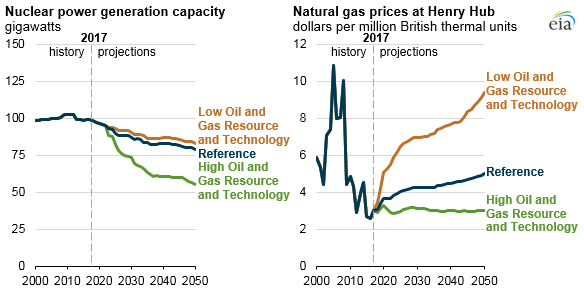 In the High Oil and Gas Resource and Technology case, lower natural gas prices lead to more nuclear retirements, and total nuclear capacity falls to 55 GW by 2050 in this case. Conversely, in the Low Oil and Gas Resource and Technology case, higher natural gas prices lead to fewer nuclear retirements, but nuclear capacity still falls to 83 GW in 2050. In all three of these cases, no additional nuclear plants come online beyond the units currently under construction in Georgia (Vogtle Units 3 and 4), but in some locations nuclear power plant capacity increases because of uprates. 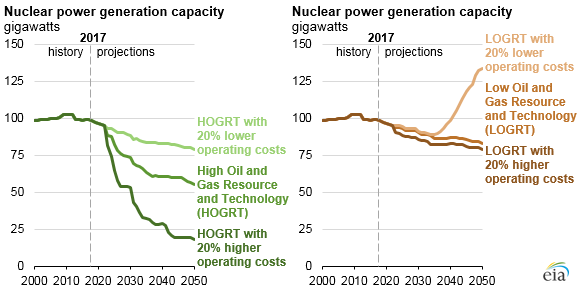 Effects of various carbon fees. Potential policies that would subject fossil fuel-fired power plants, such as those fueled by coal, natural gas, and petroleum, to fees based on their carbon dioxide (CO2) emissions would result in higher wholesale electricity prices, and in turn, would allow nuclear power plants—which do not generate CO2 emissions—to become more economically competitive.

Two cases implement fees of $15 per ton of CO2 and $25 per ton of CO2 (in 2017 dollars) starting in 2020, increasing by 5% in each subsequent year in real dollar terms. In both cases, much of the existing nuclear fleet remains competitive, and additional nuclear plants are constructed so that capacity in 2050 is higher than current levels. With a $15 per ton CO2 fee, nuclear capacity increases to 106 GW in 2050; at $25 per ton, capacity increases to 145 GW in 2050.