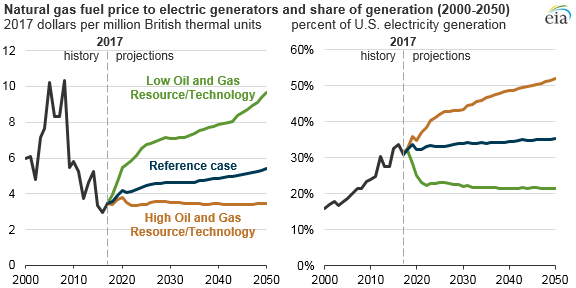 The mix of fuels used to generate electricity in the United States has changed in response to differences in the relative costs of electricity-generating technologies and, for those technologies that consume fuel, the cost of fuel. Several cases in EIA’s Annual Energy Outlook 2018 (AEO2018) show how projected generation and capacity could continue to be affected by fuel price patterns, particularly for the price of natural gas. In a sensitivity case with low natural gas prices, natural gas ultimately provides more than half of all U.S. electricity generation by the mid-2040s.

In the Reference case, electricity generation from coal and nuclear gradually decline and lose market share to natural gas and renewables. Renewable generation surpasses nuclear by 2020 and surpasses coal by the mid-2030s as tax credits and lower capital costs drive solar photovoltaic and wind capacity additions. 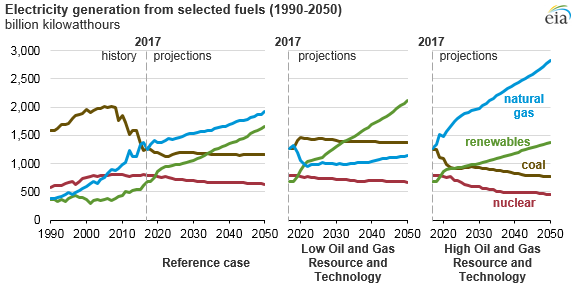 Conversely, in the High Oil and Gas Resource and Technology case, which has the opposite assumptions for resource extraction costs and availability, natural gas prices are projected to remain well below $4.00 per million Btu through 2050. Relatively low natural gas prices lead to higher utilization of existing plants and to more natural gas power plant construction.

Conversely, in the relatively high natural gas price environment in the Low Oil and Gas Resource and Technology case, electricity generation from both renewable and coal-fired plants gains market share as the natural gas share declines. Renewable technologies become the predominant source of electricity generation in this case, surpassing natural gas-fired and then coal-fired plants as the primary source of generation by the mid-2030s. Coal-fired generation remains relatively high because of fewer retirements and higher utilization rates for existing coal-fired generating plants. 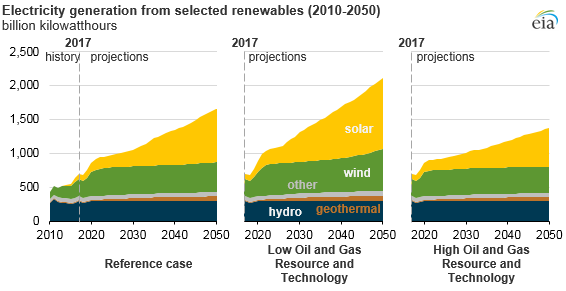 The latest EIA Outlook pretty much follows the standard set over the years. Worthless.

It’s amazing that EIA’s widely reported epic fails have continued for so long.

Rex, since 1994 EIA’s Annual Energy Outlook has been providing forecasts up to 30 years in advance. On average, they have proven accurate to within a 17% margin of error (every year, they publish a statistical review of their performance).

But you must have a more accurate source for energy predictions 30 years in the future. You don’t? I didn’t think so – no one in the pro-renewables community does. Making their whining (“worthless”, “epic fails” and “pure stupidity”) nothing more than shooting the messenger.

Bob,
Just wondering – do you think any of the coal plants that are 40+ years old now will retire before 2050? Because the EIA doesn’t – they only count announced coal closures in their model – smart eh?

From a few years ago – sound familiar?

In the case of coal consumption, the average absolute percent difference over the years 1993-2013 was 10.8%. Some years it was more, others less. The number of high vs. low estimates is almost split down the middle. If EIA is off by that margin and they’re high, coal will still make up 31% of generation in 2040 (or 37% if they’re low).
Joe, I really don’t care how confident you feel you can be. I want to know when you say “coal will drop to below 33% in 2016”, or “[coal] should be below 25% of electricity consumption by 2030”: what’s your model?

Well Bob, we’ve been over this before, remember this?

Then, there’s this predicted 20 year hiatus in wind installs, does that seem plausible to you?

Perfect example of what I am saying in my other comment just popped up in the news today. Brunner Island coal plant in PA just announced future plans for closure.

The Brunner Island power plant, which has in the past been scorned as one of the most polluting coal-fired power plants in the United States, has agreed to end production of electricity by coal by the end of 2028.

The Sierra Club, which had announced an intent to sue the facility for air and water pollution, said it had reached a settlement with owner Talen Energy.
Under the terms of the settlement, the 57-year-old plant will stop burning coal from May through September — the peak smog season — by 2023, except for burning coal in case of power shortage emergencies.

Coal will be phased out completely by 2028.

However, when they run the model next year, they will see this retirement and adjust coal generation downwards.

See how that works? Sorry, but that is just plain stupid.