Last fall Swedish lithium-ion battery maker Northvolt announced that it had raised $600 million in equity to invest in capacity expansion, research and development, and large-scale recycling.

The $600 million represented a substantial capital raise for a company that isn’t exactly a household name in the U.S., but Northvolt CEO Peter Carlsson had previously made clear the company’s intent to upend Chinese domination of the European market: “There’s a pretty significant export flow of used batteries to China, and that’s stupid. It’s important to keep these flows within Europe.”

Northvolt made the biggest deal in the battery space in 2020, but it was a huge year overall for the rapidly-growing sector. Mercom Capital Group, a global communications and research and consulting firm focused on cleantech, recently released its Q4 and Annual 2020 Funding and M&A report for the battery storage, smart grid and energy efficiency sectors.

Some of the key findings from the report include:

The report noted that lithium-ion based battery technology companies received the most VC funding in 2020, with $649 million. But other storage categories also received funding, including solid-state batteries, energy storage downstream, energy storage systems, and flow batteries. 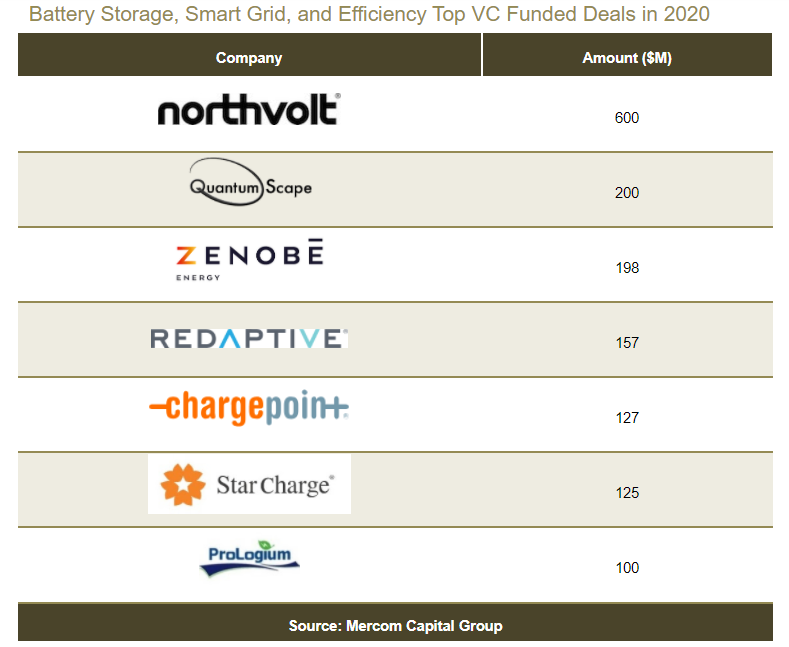 Investor interest in the space is clearly on the rise. In 2020, 105 VC investors participated in battery storage deals compared to 78 in 2019. Breakthrough Energy Ventures was the top investor in 2020. Utilities and oil and gas companies were involved in four battery storage funding deals in 2020.

There were 19 M&A transactions in the Battery Storage category in 2020, of which two disclosed transaction amounts. A total of 24 battery storage and solar plus storage M&A transactions were announced in 2020 compared to 11 in 2019.”

But some of the deals announced in 2020 represent an important shift in developing a robust battery industry that isn’t fully reliant on China.

A big part of this strategy is reflected by Northvolt’s investment in battery recycling. A recent IHS Markit Report noted:

“Large waves of end-of-life batteries (batteries at the end of their usable life) are set to begin this year, creating a sizeable repository of recyclable material. IHS Markit expects that over 500,000 tons (57 GWh) of batteries will reach their end-of-life point in 2020. That figure is expected to rise to 1.2 million tons (121 GWh) in 2025 and reach 3.5 million tons (350 GWh) in 2030—a seven-fold increase.”

With the world increasingly moving in the direction of electric vehicles, and with the expected explosion in the volume of batteries that need recycling, the significant investment in Northvolt seems to make perfect strategic sense.