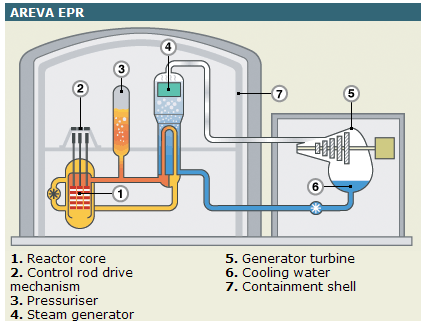 (NucNet contributed to this report) French President Macron announces ambitious plans for 14 new 1600 MWe nuclear reactors. The first EPR2 plant could be online by 2035 and existing plants could have their lifetimes extended from 40 to 50 years.

France’s president Emmanuel Macron announced plans on 10 February 2022 to relaunch the country’s commercial nuclear program with the construction of at least six new nuclear power reactors – and the possibility of eight more for a total of 14 – if he is reelected in elections in two months.

French media reported in October that the impact of Europe’s gas crisis on energy prices, and its effect on household spending power, had accelerated Paris’s decision to commit to the new EPR technology. As the first new reactor wouldn’t be in revenue service until 2035, Macron’s plan to also extend the lives of the current fleet of reactors to 50 years of service is an important stopgap measure.

“What our country needs, and the conditions are there, is the rebirth of France’s nuclear industry,” Mr Macron said, as he unveiled his new nuclear strategy in the French eastern industrial town of Belfort. The city is located near France’s eastern borders with Germany and Switzerland.

The first new reactor in a suite of six units, based on a design that will be an evolution of the European Pressurized Reactor (EPR) known as the EPR2, would come online by 2035. Studies for a further eight reactors beyond the initial half-dozen new plants would be included in the massive effort. The size and scope of the domestic supply chain and workforce requirements will be enormous and the French nuclear industry would need to start planning for the new build immediately. The location of the fleet of 14 units has not been set, but coastal sites offer several advantages including access to cooling water and delivery of large long lead time components by ocean going barges. It is also likely that some or possibly all of the new units will be built adjacent to existing nuclear power stations.

Macron committed to the first six reactors to be built by 2050 with another eight to be considered for construction thereafter which could take another 20 years or completion by 2070! The country would be much better off scheduling all 14 at once to get much better economies of scale in terms of construction costs and supply chain efficiencies. The table below displays a hypothetical schedule along these lines.

If the first two units come online in 2035, and the remaining 12 units come online in phases completing the 14 unit fleet by 2044. The EPRs could be built four at a time which is what South Korea accomplished in the UAE. This would be a very ambitious schedule, but a good bet is President Macron wants one that gets the job done as fast as possible so he might want to talk with EDF about a new plan.

Macron said the new plants would be built and operated by state-controlled energy company EDF and that tens of billions of euros in public financing would be mobilized to finance the projects and safeguard EDF’s finances.

In October, Mr Macron said that by 2030 France must be a leader in carbon-free power production with one small modular reactor (SMR) in operation and nuclear plants used to produce clean hydrogen through electrolysis. He promised overall  €30 billion to be committed towards clean energy investments including nuclear, solar, and wind projects.

In making this commitment, he is outpacing every other western nation to pursue decarbonization by investing in nuclear energy.  The cost at an estimated $6,000/Kw would be about $9.6 billion per reactor or about $135 billion for the entire fleet of 14 1600 MWe EPRs.

Macron’s statement indicated the first six reactors would cost $50 billion which comes in at $8.3 billion each or about $5,200/Kw. This number is not consistent with current global costs in western countries ($6,500 Kw / $10.4B/unit) which is why this blog pegged the cost for the hypothetical build out scenario at $6,000/Kw, which is still a very competitive price in today’s global market.

A massive build like this one would put price pressures on major long lead components like reactor pressure vessels, steam generators, and turbines, as well as switchyard equipment and grid improvements, making it even more important to build as fast as possible to avoid an encounter in the 2040s with sky high costs for the first round of six reactors and costs that simply couldn’t be estimated in the post 2050 second phase for another eight units.

Mr. Macron said the state would assume its responsibilities in securing EDF’s finances, indicating that the government will have to inject fresh capital into the 84% state-owned firm.

Previously, the government had said it would not launch any new EPR reactor projects until state-owned EDF’s delayed Flamanville-3 EPR is completed. That policy appears now to have been set aside which is just as well. The significant delays and cost overruns for the two first-of-a-kind units are what’s driving EDF to redesign the EPR to make it more cost effective to build it and better able to keep to a schedule.

The company said fuel loading date for the Flamanville 1,630 MWe EPR unit had been pushed back from the end of 2022 to the second quarter of 2023. EDF now estimates the total cost of the project at €12.7B, an increase of €300M compared to the most recent previous estimate of €12.4B. EDF blamed the delay on the effects of the COVID18 pandemic.

The startup of revenue service for the EPR in Finland has been delayed yet again due to an unscheduled shutdown of the reactor.

On the nuclear energy side there is still work to be done before construction can begin. The so-called EPR2 does not yet exist except in computer design files at EDF. France does not have at this time a confirmed roadmap and timeline for designing and bringing an SMR to market.

Macron said Europe will never have enough renewable energy capacity to produce sufficient green hydrogen and that France’s nuclear plants are a major asset for doing this. He said France would build SMR and two related “megafactories” for the production of green hydrogen – and all of this to be accomplished by the end of the decade.

The chairman of state utility and nuclear operator EDF, Jean-Bernard Lévy, said in an interview for Politico that the deployment of six new EPR units between 2035 and 2045 would help France meet its climate neutrality targets while supporting the accelerated development of renewables.

This schedule is slower than Macron might like, Whether EDF can execute it remains to be seen. The firm is also building two EPRs at the Hinkley Point C site in the UK and is expected to sign on to build two similar units at the UK’s Sizewell C site. So the question is can EDF execute not only its current commitments in Finland, France and two sites in the UK, and also take on six and perhaps all 14 new EPRs? It is a very tall order.

France has 56 commercial nuclear power reactors that provide about 70% of its electricity, the highest share of any country.

Mr Macron made the announcement about the new reactors at the factory in Belfort where Arabelle turbines, used in French nuclear plants are made. The turbines were produced by Alstom, which was sold to the US giant General Electric (GE) in 2015 when Mr Macron was economy minister.

After a long period of negotiation, EDF announced this week that a deal has been signed to have exclusivity in the purchase of part of GE’s nuclear activity known as “Steam Power,” which includes the Arabelle turbines, according to a joint statement. The steam turbines are among the most powerful in the world and have capabilities that exceed the power rating of the 1600 MWe EPR.

The transaction – the financial terms of which have not been disclosed – would also include steam turbine technology for future nuclear plants, such as the EPR2 pressurized water reactor and small modular reactors (SMRs). A closing date by the end of the first half of 2023 is expected according to EDF.

France needs to build 30-45 reactors by 2050 to secure the EU security, for France & all EU countries!

With you, Ed. I think Germans may need a few weeks without natural gas to understand how dependent they are on it - nothing like food rotting in a refrigerator to teach one the value of reliable electricity. It's a lesson they may have to learn very soon.