The first principals of a climate solution:

and how Thermodynamic Geoengineering (TG) uniquely meets them at zero cost.

​As the Mirrors for Earth's Energy Rebalancing (MEER) organization, lead by Dr. Ye Tao of Harvard points out, “temperature rise is the biggest and gravest concern that we face."

They say the 4 main criteria any strategy must fully satisfy to be considered a good possibility as a climate solution are:

The following graphic is for a 0.34 kWh prototype that would produce about $300 worth of power/year, while transferring about 3 grams of carbon dioxide (CO2) from a 14 cubic meter enclosed atmosphere to a stratified water column consisting of 14 cubic meters of hot water and 14 cubic meters of cold water. 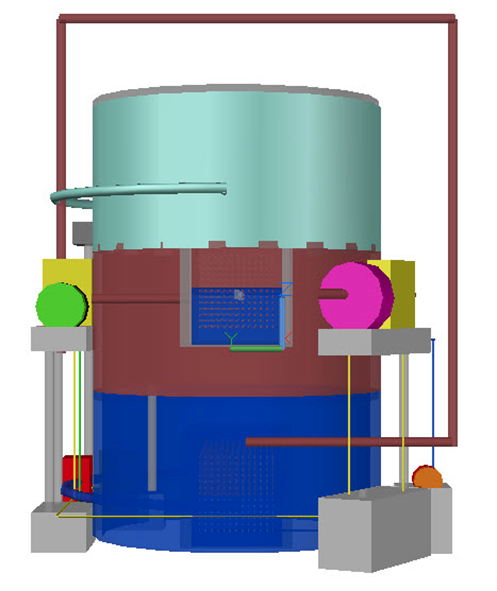 This is an adapted ocean thermal energy conversion (OTEC) system of a deep water condenser design first patent by Dominic Michaelis, inventor of the EnergyIsland, and has been demonstrated by David Cowden of SeaGreen Water and Power.

As its name implies, OTEC converts the heat of tropical surface waters to work, which requires the cooling of the surface at the expense of the warming of deep water.

In the case of conventional OTEC, which has a conversion rate of about 3%, the residue from both the systems evaporators and condensers are both released into the mixed layer of the ocean, where the diffusion of the heat is about 1 meter/day. Therefore, the residual surface heat is back at the surface in about 3 months and no real surface cooling is effected.

With TG however, surface heat is shifted through a heat engine, which extracts 7.6% of the heat in the form of work and the balance to a depth of 1,000 meters from where the diffusion rate is 1 centimeter/day to the bottom of the mixed layer, which is about 100 meters thick.

It takes therefore about 226 years for heat shifted with this method to resurface. At which time it can be recycled. With the result all the heat of warming can be converted to work over the course of about 3,000 years.

Cryptocurrencies have been likened to “fool’s gold”, but the oceans contain 47 real minerals and metals, including gold and silver, some of which are already being harvested.

TG platforms harvesting surface heat by passing millions of tonnes of water through their heat exchangers, could be adapted to extract a portion of the 50 quadrillion tons of trace elements that are dissolved in solution.

The concentration of magnesium, the most abundant metal in the ocean, currently valued at between $12,000 to $15,000/tonne, is 1,272 parts per million (ppm). Whereas the concentration of CO2 in the atmosphere is a third that, yet some are contemplating removing it at a wishful cost of about $100/tonne.

A method for precipitating magnesium from sea water has been know for over a century. And alloys of magnesium reduce the weight of heat-removing elements like TG heat exchangers by a third without losing efficiency.

At 1272 ppm of 1.45 quintillion short tons of ocean water, the current cost of the metal could be reduced by orders of magnitude where it is processed as an adjunct to the TG energy production process.

So, there are more than enough resources to implement this solution. And what’s more, even at the pre-COVID price of at about $2,500/tonne for magnesium, the value of this mineral alone is about 200 times the total cost of the plants. And the break even price of magnesium would be $12.66/tonne.

If a collapse of the existing magnesium market is a concern, 31,000 1 GW would use only about 2.7 million tonnes of magnesium, which is only about 0.00005% of the 3.9 quadrillion tonne annual potential. Or 1/50th of the total commitment of a single plant to the production of magnesium.

For the sale of magnesium to be the sole means of financing TG systems,  it would take about 157  plants, or about 0.5% of the total earning a total of $2.1 trillion.

Resplandy et al. used the measure of atmospheric oxygen (O2) and CO2 levels as the oceans warm and releases these gases as a proxy for global warming and determined over the course of the period between 1991–2016 the average warming amounted to about 409 TW, equivalent to a planetary energy imbalance of 0.80 ± 0.49 W watts per square metre of the Earth’s surface.

The Los Alamos physicist Melvin Prueitt worked out the efficiency of a deep water condenser system like TG is 7.6% so about 31 TW of energy is available. Which is 2.1 times what we are getting from fossil fuels. Therefore, there is more than enough energy to cool the planet and provide for the other the needs of humanity.

The MEER group calculates the Earth’s energy imbalance (EEI) is currently about 1,500TW. In part due to what they call Locked-in warming (LIW). Which is the future increase in the average global temperature that will occur when emissions finally stop.

The current EEI of 1.5W per m2 can increase by about another 1.3W per m2 when the skies are cleared of air pollution.

It has taken us 242 years to build up to the current EEI, which has doubled between 2005 to 2019, so it will take at least that amount of time to unwind the damage over the next 242 years. So, an unwinding of about 409 TW/year over that period would appear to be reasonable.

4.      Global implementation that would be fast enough.

By doubling the current installed capacity of 100kW/yr of OTEC power  every year for the next 33 years we can start producing 31 TW/year, capable of displacing about  0.8 W/m2 of average global surface heat from the surface of the ocean to deep water, which could be recycled in 226 year cycles, while sequestering 4.3 Gt CO2 per year.

But as MEER admonishes. “we must remind ourselves that the most immediate goal is not, as is too often assumed, the removal of greenhouse gases, but rather the halting of rising temperatures.”

They have developed the notion of  Cooling Return on Investment (CROI), which tells us how effective at cooling the Earth any proposed climate solution is. And in this regard, there is no better example than TG.

Renewable energy can’t save us from climate catastrophe. It can only staunch the bleeding because the damage we have already inflicted is leading to a total Earth system collapse.

The only salvation would be the removal of thermal energy from the surface, which TG provides while mitigating every other consequence of global warming. All at zero cost but with massive profit potential.