Fighting For the Environment: Keep Nuclear in the Mix

Earlier this month I enjoyed a week of vacation sitting on the beach in front of a beautiful camp (or cottage, cabin or country house, depending on where you are from) staring at a stunning view of the north shore of Lake Superior, the world’s largest fresh water lake. This is pretty far north (at the 49th parallel), and this year the summer has been very hot. Once again, July has been the hottest month ever recorded. 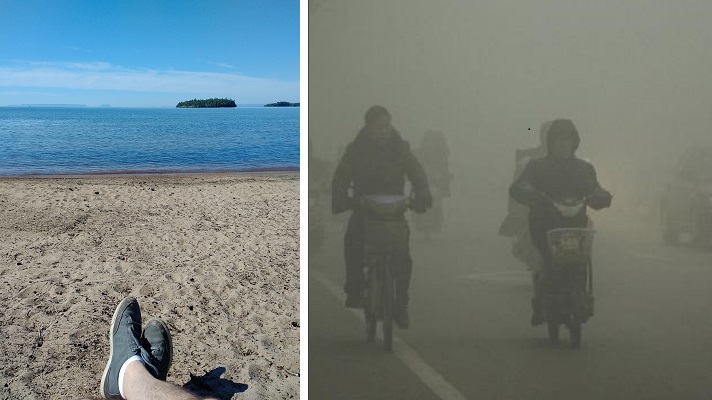 It’s times like this of quiet reflection that the issue of environment comes to the forefront. Contrast this idyllic view to that of some of the world’s cities where pollution is rampant and health is impacted every day. This is the short term need – make the air breathable for all those that are having their health impacted negatively by pollution primarily coming from burning coal to generate electricity and from burning fossil fuels in cars each and every day. And then there is the issue of climate change. Harder for many to understand as the consequences are not as easy to see in the short term; but clearly the environmental issue of our time.

Let me start by saying that I am not one of those people that believe we should directly tie the future of nuclear power to climate change but rather that the case for nuclear needs to be made on its merits – reliability, economics, sustainability and yes, its environmental attributes. In fact, today environmental attributes of any generation technology should be the price of entry – low carbon and low polluting technologies are the ones that should make the list to be considered for deployment. However once on the list it is the other attributes that need to be considered when planning and implementing a robust electricity supply system.

Looking at this beautiful view, I find it hard to understand how so many are trying to disadvantage the environment by excluding nuclear power from the list of technologies that are environmentally friendly. And not just for new generation, but many are fighting to close existing plants that have been providing clean, economic and reliable electricity to the grid for decades. Examples abound.

In California, a decision was recently taken to shut down Diablo Canyon in 2025 rather than extend its life and replace it with renewables and demand management. This decision has recently been severely criticized by Dr. James Hansen, one of the world’s most prominent climate scientists who has asked the Governor for a debate on the issue stating “Retirement of the plant will make a mockery of California’s decarbonization efforts. Diablo Canyon’s yearly output of 17,600 gigawatt-hours supplies 9 percent of California’s total in-state electricity generation and 21 percent of its low-carbon generation. If Diablo closes it will be replaced mainly by natural gas, and California’s carbon dioxide emissions will rise…” [Read the entire text of the letter here]

In New York state there has been an important victory as nuclear has been included in the clean energy standard as legislators have acknowledged the important role that nuclear plays in reducing carbon emissions; and in fact accepts that meeting carbon objectives is simply impossible without nuclear. However, this is just a first step. It protects existing nuclear but also maintains the future target of 50% renewables, making nuclear a bridge to the future. Well if existing nuclear is good, then so should new nuclear – but that fight is for another day.

Of course the battle to include nuclear as a low carbon energy option is not uniquely a US issue. A new study by the University of Sussex and the Vienna School of International Studies suggests that “a strong national commitment to nuclear energy goes hand in hand with weak performance on climate change targets”. While the authors do note that “it’s difficult to show a causal link”, this does not stop them from suggesting it is likely there. It is easy to say that Germany has done a good job and reduced its carbon emissions by 14% since 2005. What is not said is that Germany’s carbon reduction efforts have really struggled since it closed a number of nuclear plants in 2011 after the Fukushima accident and has yet to get back on track; which was likely a key factor in Sweden where the Greens have accepted the need for continued nuclear operation to meet its climate goal.

Here in my home jurisdiction of Ontario Canada, we had the largest carbon reduction in all of North America as coal was removed from the generation mix in 2014. This was not done by replacing coal with renewables although renewable generation has increased, but was made possible by refurbishing and returning nuclear units into service.

I have written extensively about peoples’ belief systems over the years and this is what is standing between nuclear and success. Ask anyone in the street about clean electricity and you will hear that renewables, primarily wind and solar, are what is needed to transform our energy systems. Ask about nuclear and the response is much more likely to be mixed.

It is great news that many environmentalists are now seeing the necessity of nuclear in the mix. As concluded by James Hansen in his letter” It would be a tragedy if we were to allow irrational fear to harm the climate and endanger the future of our children and grandchildren.” So if we are to avoid a tragedy, we in the nuclear industry have a lot of work to change the narrative and continue to increase public support. The agreement in New York is a good beginning but the hard work has only just begun.

Until the issues of cancers in miners have been addressed, and reparations paid, until all risk of water pollution is addressed to even begin to suggest there are environmental benefits in using nuclear power is a bald faced lie only promoted by people who are trying to make a deal and line their pockets.

the reality is we are going to see a shrinking economy and shrinking power usage, so why build stuff that kills and is not needed? only criminals are suggesting more nukes.

I suppose there are people who share your belief. But it turns out that the vast majority of the scientific community believes just the opposite. Modern societies simply can’t survive without basing public policy on sound science.

Furthermore, if the the pre-1970’s learning rates and accelerating deployment rates had continued, 4.5 to 9 million deaths could have been avoided by nuclear replacing coal and gas for electricity generation between 1985 and 2015.

The learning rates and deployment rates of nuclear power were disrupted, beginning in the late 1960’s in USA and soon after in other countries.

Additionally, electricity supply decarbonisation is easy to achieve with nuclear.

If you exclude countries such as Norway with 99% hydro generation, the most decarbonised industrial country grids include nuclear generation. Just look at France, Sweden and Finland. They are already as or more decarbonised as Germany with their Energiewende wants to be in 2050.

Nuclear’s biggest enemy isn’t anti-nuke activists, it’s cheap natural gas in a deregulated sector. A price on carbon would help. And it seems PG&E’s fallback plan if renewables cannot scale up is to burn gas.

Hops, California’s most prominent anti-nuke activists are (non-coincidentally) natural gas entrepreneurs – including our governor. Jerry Brown’s sister sits on the board of Sempra Energy, the $17-billion natural gas behemoth.

Jerry Brown’s Ties to the Oil and Gas Industry.
http://public-accountability.org/2015/12/jerry-browns-ties-to-the-oil-an...

Yes. And this is the benefit forgone:

If the the pre-1970’s learning rates and deployment rates had continued, 74-170 Gt CO2 could have been avoided by nuclear substituting for fossil fuels for electricity generation between 1976 and 2015.