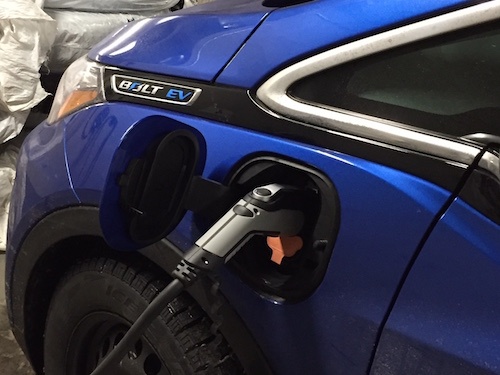 The federal government isn’t saying whether it will top up funding for its C$300-million electric vehicle purchase incentive, even though Transport Canada figures show 75% of the funds used up in the first 15 months of the three-year program.

Even though Transport Canada Minister Marc Garneau’s mandate letter instructed him to advance the government’s goals on zero-emission vehicles (ZEVs), his office wouldn’t say whether the incentive program would be expanded. “This specific program continues and consumers are able to make use of the incentive,” spokesperson Livia Belcea told CP in an email. “Any changes in funding for the program would be reviewed at the appropriate time and as needed.”

Electric Mobility Canada President Daniel Breton said he wasn’t surprised the rebate has been so popular—or that Quebec and British Columbia, with their own provincial incentives, account for 86% of the total, with Ontario contributing another 12%.

“Breton said the additional provincial rebate makes buying electric cars more attractive in Quebec and B.C., but car makers are also shipping more electric cars there because their dealers have quotas for sales,” CP writes. With the vehicles in short supply, the news agency notes that buyers are waiting weeks or months for delivery. Electric Mobility Canada is calling on the government to extend the program to used cars, and increase the maximum purchase price of ZEVs that can qualify for rebates, now that electric SUVs and pickup trucks are about to enter the market.

While advocates and federal officials discuss the fate of the rebate program, EV organizations are also expressing concern about the latest draft of the Clean Fuel Standard (CFS), another cornerstone of the pan-Canadian climate plan that is intended to save 30 megatonnes of annual greenhouse gas emissions by 2030. “With the plan set for implementation in the fall, stakeholders across the industry had been eagerly anticipating the draft—but the removal of a few key provisions has sparked concern among some market participants,” Electric Autonomy reports. “The most contentious change is that electric vehicle charging that is not done on chargers tied to a network will no longer qualify for credits—the tradeable, sellable environmental commodities that underpin the CFS system.”

Non-network charging includes the majority of sessions in homes or on the street, the online publication states.

“More than 80% of the electricity delivered to electric vehicles in Canada comes from charging stations that are not connected to a network,” said Kelsey Lane, co-chair of the Electric Vehicle Society’s government relations committee.

“We don’t like the fact that home charging has been dropped because we understood that we could receive some of the credits connected with home charging,” added David Adams, president and CEO of Global Automakers of Canada, which speaks for most major automakers that aren’t based in the United States.

The EV Society is also concerned that the latest version of the CFS eliminates credits for education and outreach activities, favours urban centres over Prairie, Atlantic, and rural communities, and phases out credits for network charging in 2027, three years before the government’s target date for ZEVs to hit 30% of total auto sales. “We believe this phase-out will reduce the amount of revenue available to reinvest in activities that reduce barriers to EV adoption,” Lane said.