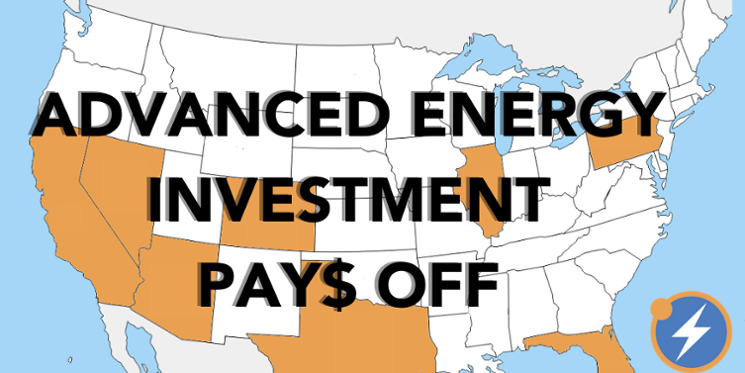 Whether the United States has “turned the corner” on the COVID-19 public health crisis or is looking at a long, cold winter of social distancing, at some point the conversation in Washington, D.C., is going to have to move from providing short-term relief to jumpstarting economic growth. When that time comes, advanced energy deserves to be high on the list for federal stimulus dollars. Public support is high: A recent New York Times/Siena poll shows that more than 70% of voters would support a $2 trillion renewable energy and infrastructure plan for economic stimulus. What would an infusion of stimulus funds like that mean for states? AEE, along with Texas Advanced Energy Business Alliance (TAEBA), asked Analysis Group, an international economics consultancy, to run the numbers for eight states. The results show a high ROI for public dollars put to work in advanced energy.

If apportioned to states in a manner similar to the last major federal stimulus program, in response to the 2008-09 Great Recession, $2 trillion invested in a range of advanced energy technologies and services – solar and wind generation; energy efficiency; energy storage; electric vehicles and charging infrastructure; grid and transmission upgrades – would yield massive returns. In the eight states analyzed by Analysis Group, results varied but nowhere showed less than a four-fold impact on the state’s economy overall (Gross State Product, or GSP), and ranged as high as 14 times the public investment. Public investment in advanced energy would draw roughly two-and-a-half times as much in private capital, with both then rippling through the economy and producing millions of jobs. For instance, in California $100 billion in public stimulus would spur $263 billion in private spending, together producing $727 billion in GSP and 4.1 million job-years’ worth of employment. These jobs range from short-term installation and construction jobs to long-term positions in retail, services, and other occupations.

Advanced energy investments would also produce millions of dollars in tax revenue. In Texas, $55 billion in stimulus would give state and local governments an additional $18 million in taxes. The stimulus spending would also pull in $134 billion of private investment, on the way to an overall economic impact of $350 billion.

Another  sector with potential to boom is electric transportation, both electric vehicles (EV) and associated charging infrastructure, which would represent $80 billion in growth and 475,000 job-years for California. In Colorado EV-related spending would generate $16 billion in GSP and 135,000 job-years of employment out of $157 billion in total economic impact and 1 million job-years from $25 billion in stimulus investment.

The growing energy storage segment would also reap returns, with $46 billion and 379,000 job-years in California and $7 billion and 54,000 job-years in Illinois. Lazard’s newest Levelized Cost of Storage (LCOS) report shows that storage prices are becoming increasingly affordable for wide-scale use, suggesting potential for exponential growth.

All of this goes to show the possible benefits advanced energy stimulus can produce in states from California to Florida – and that it’s exactly what’s needed for the economy to recover from the COVID-19 pandemic.