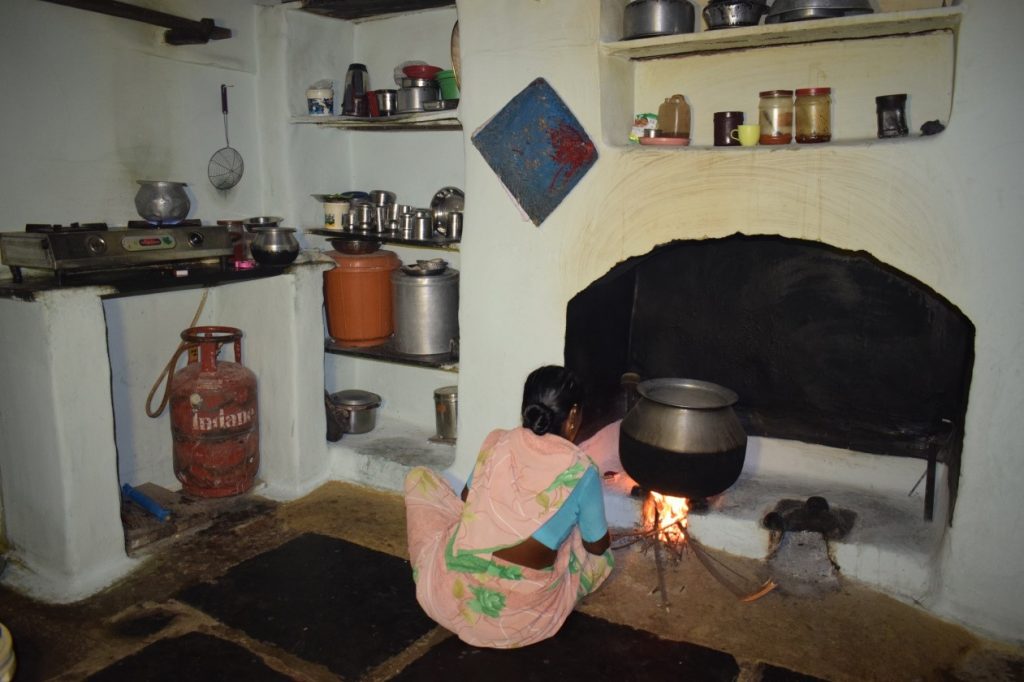 The global pandemic of corona virus disease (COVID-19) has left policymakers with the challenge of balancing public health and economic priorities. In some ways, it is very similar to the problem of household air pollution from cooking- both in terms of nature of problem (economic cost of mitigating public health impact), scale (billions impacted), and impacts (risk of millions of deaths).

About 2.6 billion people globally depend on solid fuels like firewood and coal as primary energy source to cook food in primitive devices. It leads to inefficient combustion leading to kitchen smoke which in turn causes indoor (household) air pollution and contributes to outdoor (ambient) air pollution. It is estimated that nearly half of the world’s population—a total of 3.6 billion people—were exposed to household air pollution in 2017. It is estimated that exposure to air pollution smoke increases risk of several diseases including lung cancer, and stroke. Household air pollution from solid fuels kills between 1.6 – 3.8 million people globally every year. As vast majority of these (cooking) energy poor population are rural poor in Asia and Africa, modern cooking fuels like electricity or gas are not easily available or/and affordable. Liquefied petroleum gas (LPG) is generally considered as a clean fuel with highest scalability potential in these under-served regions. We can visualize the transition from solid fuels to LPG as a three-stage process: physical availability, initial uptake (adoption) by consumers, and enough LPG use such that solid fuel use is minimal or discontinued. Different countries are at different stages in this transition process.

Some developing economies such as Ghana are making strides in recent years to improve their cooking gas distribution system with the goal of making LPG purchase safe (pre-packed bottles/ cylinders), available (on demand supply) near home (expansion of distribution network). Other countries like India which have crossed this stage focused on the adoption challenges. The initial capital cost of switching to clean fuels in terms of purchase of hardware and enrollment cost are considered as a major barrier. In response, India launched a massive program Pradhan Mantri Ujjwala Yojana (PMUY) to ease the burden of the capital cost for poor women. Eighty million women participated in the scheme to avail subsidy and low-cost financing which enabled them to get new LPG stoves. However, they did not stop using solid fuels, but only added LPG to their existing fuel mix (known as “stacking”). The recurring cost of filling up (refill) of LPG bottles/ cylinders (see, the red cylinder in the picture above) is a significant burden on their modest household budget. When rural poor often have relatively easy access to free (non-monetized) solid fuels like wood and crop residue to cook food, they are reluctant to invest in commercial fuel like gas for essentially the same service: cooking food. Countries like Ecuador have moved to the third stage of transition through provision of massive gas subsidy for consumers which enabled vast majority of their population to switch to LPG, though there are intermittent stacking practices. While making LPG free seems straightforward from public health perspective, the financial cost (1-3% of GDP in many countries) is prohibitive for many developing economies.

For my Ph.D. at the University of British Columbia in Vancouver, Canada under Prof. Hisham Zerriffi, I had the unique opportunity to  analyze LPG sales data of 25,000 consumers- both PMUY and non-PMUY (general) consumers who lives in villages in Koppal district of Karnataka in India. The paper was published in Nature Energy journal in September 2019 issue (was featured on the cover, yay!). We showed that 1) rapid increase in LPG uptake due to PMUY did not result in transition away from solid fuels, 2) The common sense perspective that with experience (familiarity/ ease of use) LPG increase will increase over time is questionable, and 3) The LPG consumption among PMUY beneficiaries is less than half that of rural general consumers.

While I have maintained that the data (and adjacent analysis) should not in any way be considered as representative of a diverse country like India with more than 250 million consumers, it was a pleasant surprise to see that our broad data driven conclusions were in line with a national audit of the PMUY program by India’s independent auditor. It generated widespread media attention, including front page stories in top dailies. Considering the public policy ramifications, we had written a policy brief on the topic. Media reports based on the policy brief was published in major newspapers and news portals across India in different languages. I wanted to take this opportunity to expand upon those policy recommendations (we could not do so in the paper due to strict word limits).

We have made five specific policy recommendations based on the analysis presented in our published paper that is targeted at both the Indian government, and other entities exploring Ujjwala like scheme in developing nations. I will add couple more based on our unpublished (under peer review/ manuscript under preparation) data and interactions (both on and off the records) with 50+ stakeholders in the Indian LPG supply chain from the Honb’le Cabinet Minister at federal level to the delivery boys responsible for door-step LPG delivery.

First, Ujjwala’s incentives and program modalities as it stands today are very unlikely to lead to regular LPG use. Unless there is dramatic change in the situational context (PMUY beneficiaries income shoots up, or getting wood becomes very challenging), there won’t be any automatic transition driven by experience/ time, as some may have hoped. In our analysis we find, counter-intuitively, that experience (familiarity with LPG) does not lead to any consistent increase in LPG use among general (non-PMUY) consumers. (We did not have multi-year purchase trend of PMUY consumers as it was a relatively new scheme at time of data collection). Hence, Ujjwala 2.0 must provide incentives to tackle the aforementioned five problems. Ujjwala was designed to enhance access, and it did it with flying colors. Now, it needs to move to the next stage of incentivizing transition in terms of regular use.

Second, while there is a growing consensus to focus on increasing use by PMUY beneficiaries in Ujjwala 2.0, in order to have smokeless kitchens in rural India, we cannot forget low-use general (non-PMUY) LPG consumers in rural India. We used LPG purchase records of 25,000 consumers going back up to five years to assess the use of LPG in rural Koppal (Karnataka). We found that 55% of general (i.e. non-Ujjwala) LPG users purchased four or less (14.2 kg) LPG cylinders in the first year of ownership, and that consumption trend did not increase sharply over the years. This suggests that about half of LPG users that paid the full amount (~INR 5,000) for an LPG connection (unlike PMUY beneficiaries) only use LPG as a secondary cooking fuel. This dataset also shows that blaming PMUY alone for lack of LPG transition in rural India is unfair.

Third, India is one of the few developing countries with a robust IT system for LPG distribution infrastructure which allows us to track individual LPG purchase history of every LPG consumer in India, including date of order, date of delivery/ pickup, upfront distributor price and net price (after adjusting for the subsidy bank deposit). It is a remarkable feat which one only appreciates when they encounter LPG infrastructure in other developing countries where such data is absent. I was extremely fortunate to get access to that data for 3 distributors in Koppal area. This dataset is currently used only for internal record-keeping and analyses by the three public sector oil marketing companies (OMCs), namely Indian Oil, Hindustan Petroleum and Bharat Petroleum. If researchers get access to this anonymized (dataset scrubbed of personal information of consumers) dataset, it can help us generate robust data-driven insights on several topics like seasonality trends and price sensitivity from different academic perspectives. This dataset is severely under-utilized given its scale and richness of data.

Fourth, while I have discussed the need for incentives to tackle the problems, I must admit that we do not know enough to suggest specific incentives/ public policy instruments are easily implementable, affordable (for government/ OMC/ consumers), and scalable for a large & diverse country like India. In our paper we do suggest some ideas that are worth testing based on our data analysis and review of literature in other behavior change domains. For example, during summer there is little agricultural income and post-harvest crop residue is still available, which leads to drop in LPG sales. Hence, summer discounts may be useful. Again, literature suggests that repeated reminders are useful during habit change processes. If consumers are provided personalized messages based on their consumption history, instead of generic messages on why LPG is good, it may be useful. We need to conduct more experiments and randomized control trials to test effectiveness of such interventions at pilot scale before a national roll-out. We don’t know yet how to solve the problem of energy transition in rural areas of developing countries without massive injection of end-user subsidies (like in Ecuador).

Fifth, we know that some countries in Africa are exploring roll out of LPG access programs based loosely on the Ujjwala model. They would do well to not just study the demand creation in Ujjwala, but also study the accompanying IT systems and supply chain infrastructure. India is able to accurately track use of PMUY beneficiaries (whether it is low or high is another question) thanks to the massive efforts that were put in place by successive governments to modernize the LPG supply chain infrastructure.

I would add two more recommendations based on my interactions across the supply chain.

One, there is a need to be sensitive to local factors in the pricing mechanism. Currently, this national fixed price (with minor variation in local taxes) model is not responsive to major local impediments like drought, floods, agrarian crisis which severely depleting purchase capacity of people at a district or even sub-district level on a temporary basis. Empowering regional managers of OMCs to provide for special temporary discounts could be useful.

Second, zoning of villages under distributors’ area of operation based on road access, and intensity of demand could be useful. Distributors can then charge extra home-delivery fees from consumers/ distributors to make up for the additional charges to be incurred in the process of say, sending a truck 5 km far to deliver 2 cylinders. Instead of a national price policy, a joint committee of distributors, OMC officers and Panchayat members can work out the details considering the localized factors at play within certain guidelines.