The European Union Continues on Its Course to Lower GHG Emissions

Already Member? Sign In.
Forgot your password?
New to Energy Central?
Applying for membership with Energy Central allows you to connect with a network of more than 200,000 global power industry professionals.
Apply today, it's free!
The European Union confirms the next milestone along its energy Roadmap. The nations of the world are working toward establishing a new climate treaty by late 2015 that would lower future greenhouse gas emissions (among other provisions). Independently, the European Union (EU) agreed to a significant goal in reducing emissions of greenhouse gases (GHGs) on October 23, 2014.  The EU is a supranational organization of 28 member nations.  As detailed below, it has had policies in place for almost a decade to reduce GHG emissions.  The new pronouncement extends its timelines and codifies goals it had already established earlier.  Specifically, the EU agreed to lower GHG emissions by 40% below the emission levels of 1990 by 2030.  The goals also include achieving a 27% share of energy from renewable sources, and increasing energy efficiency by 27%.
Emission Trading Scheme. The EU began implementing policies to reduce GHG emissions as the Kyoto Protocol (KP) became effective.  Even before KP entered into force the EU created its Emission Trading Scheme (ETS) in 2005 in preparation for entering under its emissions restrictions.  The ETS is a cap-and-trade regime covering over 11,000 major fixed sources of GHG emissions, both governmental and corporate.  Unfortunately, for much of the time since then the ETS has failed effectively to set a market price for GHG emissions that would succeed to lower emissions.  Initially, too many allowances for emission were issued, so that their price tumbled.  As this was corrected, the Great Recession reduced economic activity, lowering demand for energy, again pressuring the price for allowances to fall.  As recently as 2013 the European Parliament temporarily suspended marketing new allowances.
The deliberations leading to the new declaration also had contentious issues .  Reducing emissions of carbon dioxide (CO2), the most prevalent GHG, affects coal-burning generating plants most severely because use of coal emits almost twice as much CO2as does burning a fuel such as natural gas.  Countries in the EU heavily reliant on coal for electricity, such as Poland and other eastern European countries, were concerned that the excessive burdens of complying with the new constraints would hinder their economic growth.  The United Kingdom objected to goals for installing renewable power because of its new-found energy wealth in natural gas.  Germany has shut down its nuclear power plantsafter the Fukushima disaster, placing a greater burden on its existing coal-fired plants.
The new declaration keeps the EU within its overall timeline for long-term, major reductions in GHG emissions according to its energy Roadmap (see below).  But several environmental scientists and commentators consider the plan to be inadequate to achieve the stringent Roadmap objective in 2050.  They are concerned that the plan would leave too much of the intended reduction in emissions to be achieved later, in the two decades between 2030 and 2050, an achievement that may challenge the best technologies and policies available.  For example, Richard Black, the director of the British Energy and Climate Intelligence Unit, a nonprofit organization, doubted that this plan would “allow the E.U. to meet its long-term target of virtually eliminating carbon emissions.”
Background
The countries of the world currently face highly disparate energy situations and climate environments.  Their different conditions color their outlook as the world faces the problem of global warming brought on by humanity’s use of fossil fuels for energy.  In developed nations, which have benefited from the industrial revolution since its early days, citizens are comfortable with the lifestyle that abundant energy affords them.  Many are reluctant to change their ways to reduce emissions.
Developing nations, on the other hand, have been applying energy-intensive technologies to expand their economies only in recent decades, desiring to catch up to the developed countries in relatively unconstrained fashion.  Their people too are reluctant to move away from fossil fuels to fulfill their growing energy needs.
Impoverished countries and island nations experience the harms brought on by global warming for which they have not been responsible.  Their citizens hunger for the benefits that wider energy use could provide; those in island nations face encroaching seas as land-based ice sheets continue melting.
The United Nations Framework Convention on Climate Change (UNFCCC) has scheduled periodic global climate reports by the Intergovernmental Panel on Climate Change since 1990.  The UNFCCC led to negotiation of the Kyoto Protocol (KP) in 1997.  KP required developed countries to reduce greenhouse gas emissions, but excluded developing and impoverished countries from coverage.  KP entered into force in 2005 after the requisite number of countries ratified it (the U. S. never did, so it was not governed by its restrictions).  Most nations acceding to KP agreed to reduce emissions by varying amounts, generally less than 10%, below emission levels of 1990 by 2012.

The  European Union issued a Roadmap for greenhouse gas emission reductions in 2011, intending to reduce annual emission rates by 80-95% below the level of 1990 by 2050 (see the following graphic). 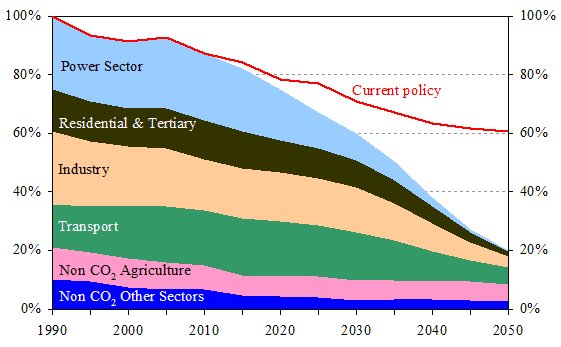 Source: “A Roadmap for moving to a competitive low carbon economy in 2050”,  broken down by economic sector. European Commission, March 8, 2011; http://eur-lex.europa.eu/legal-content/EN/TXT/DOC/?uri=CELEX:52011DC0112&from=EN
Interim milestones were established for reductions in emission rates of 7% by 2005, 20% by 2020, and 40-44% by 2030.  The European Environment Agency determined in 2013 that the EU is on track to achieve the 2020 milestone.  Renewable fuel use had climbed to 14% of total energy consumption.  About two-thirds of this originates from burning biomass and waste; in Sweden and Austria hydropower is also an important renewable source of electricity.  Wind and solar power contribute relatively small amounts to generation except for Denmark and Portugal (wind) and Cyprus and Spain (solar).
The EU is the most proactive region among developed countries in establishing policies to lower emission rates of GHGs.  The U. S., in contrast, has no legislated national energy policy directed toward mitigating GHG emissions.  In light of this failing executive actions of the Obama administration have imposed major limits on fossil fuel use in the transportation sector, have limited emissions from new electric power plants, and are proceeding similarly to lower emissions from power plants already in service.
Emissions from the developed countries of the worldconsidered as a group have been relatively unchanged in recent years, and are projected to continue that trend (see the graphic below). 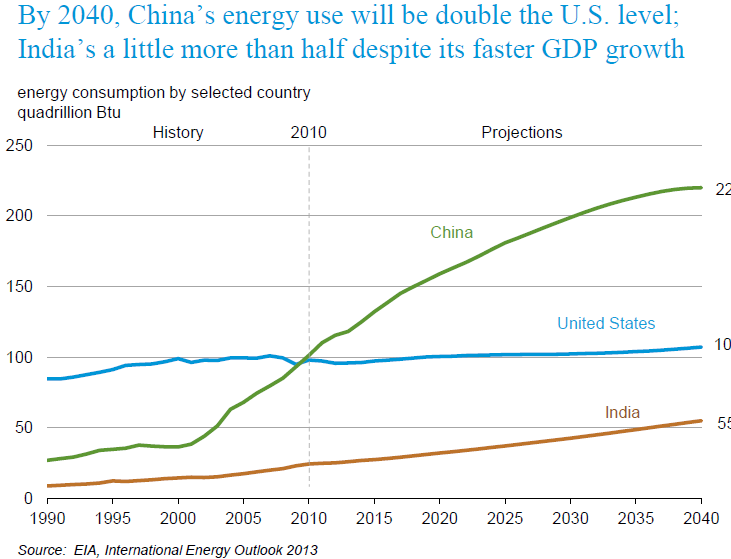 Conclusion
The declared intention of the European Union to continue meeting its milestones under the energy Roadmap to 2050 is a major contribution to mitigating worldwide GHG emissions.  Similarly the executive actions taken by the U. S. have set it along a similar path, even if not enshrined in law.  These examples show “leadership by example” for the rest of the world as negotiations proceed toward a new worldwide climate treaty intended for completion at the end of 2015.  The continued expansion of fossil fuel use by major developing countries such as China and India, among others, stands in marked contrast to the examples of the EU and the U. S.  If left unaltered, policies of developing countries could potentially impede negotiation of a meaningful treaty.  Yet significant progress toward mitigation of GHG emissions must be made in order to keep the world’s long-term average temperature from increasing more than 2ºC (3.6ºF) higher than the prevailing temperature before industrialization.  This is the upper bound adopted at the Copenhagen (2009) and Cancun (2010) conferences of the UNFCCC.  The nations of the world must succeed in these negotiations.
Henry Auer